Lots of applications here, some rather scary, others real terrifying while others are rewarding. Make your own decision(s). As an aside, we can only hope there is no Chinese technology involved or data is sold without knowledge or permission.

The service provided by Securus reveals a potential weakness in a system that is supposed to protect the private information of millions of cellphone users. With customers’ consent, carriers sell the ability to acquire location data for marketing purposes like providing coupons when someone is near a business, or services like roadside assistance or bank fraud protection. Companies that use the data generally sign contracts pledging to get people’s approval — through a response to a text message, for example, or the push of a button on a menu — or to otherwise use the data legally.

But the contracts between the companies, including Securus, are “the legal equivalent of a pinky promise,” Mr. Wyden wrote. The F.C.C. said it was reviewing the letter.

Courts are split on whether investigators need a warrant based on probable cause to acquire location data. In some states, a warrant is required for any sort of cellphone tracking. In other states, it is needed only if an investigator wants the data in real time. And in others no warrant is needed at all. 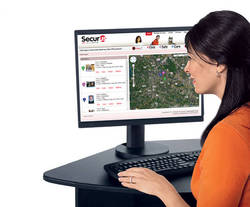 The Justice Department has said its policy is to get warrants for real-time tracking. The Supreme Court has ruled that putting a GPS tracker on a car counts as a search under the Fourth Amendment, but this was because installing the device involved touching a person’s property — something that doesn’t happen when a cellphone is pinged.

Phone companies have a legal responsibility under the Telecommunications Act to protect consumer data, including call location, and can provide it in response to a legal order or sell it for use with customer consent. But lawyers interviewed by The New York Times disagreed on whether location information that was not gathered during the course of a call had the same protections under the law.

As long as they are following their own privacy policies, carriers “are largely free to do what they want with the information they obtain, including location information, as long as it’s unrelated to a phone call,” said Albert Gidari, the consulting director of privacy at the Stanford Center for Internet and Society and a former technology and telecommunications lawyer. Even when the phone is not making a call, the system receives location data, accurate within a few hundred feet, by communicating with the device and asking it which cellphone towers it is near.

Other experts said the law should apply for any communications on a network, not just phone calls. “If the phone companies are giving someone a direct portal into the real-time location data on all of their customers, they should be policing it,” said Laura Moy, the deputy director of the Georgetown Law Center on Privacy & Technology.

Thousands of jails and prisons across the United States use a company called Securus Technologies to provide and monitor calls to inmates. But the former sheriff of Mississippi County, Mo., used a lesser-known Securus service to track people’s cellphones, including those of other officers, without court orders, according to charges filed against him in state and federal court.

The service can find the whereabouts of almost any cellphone in the country within seconds. It does this by going through a system typically used by marketers and other companies to get location data from major cellphone carriers, including AT&T, Sprint, T-Mobile and Verizon, documents show.

Between 2014 and 2017, the sheriff, Cory Hutcheson, used the service at least 11 times, prosecutors said. His alleged targets included a judge and members of the State Highway Patrol. Mr. Hutcheson, who was dismissed last year in an unrelated matter, has pleaded not guilty in the surveillance cases.

As location tracking has become more accurate, and as more people carry their phones at every waking moment, the ability of law enforcement officers and companies like Securus to get that data has become an ever greater privacy concern. Important to read more here.