There was a time during World War II that the United States crafted, owned and delivered an effective message and media campaign against Nazism and communism. All Federal government agencies including the military did a remarkable job and saw a successful campaign. Today not so much.

There was no real messaging campaign during the Korean War or Vietnam and even less when it came to the conflicts in the Middle East. Today we remain in shock that with the advancement of software and apps that Islamic States was able to own blood and death while the world still struggles with what to do going forward.

Since that time, Russia has continued to apply advance social media and cyber operations against her adversaries with substantial success. Still nothing from the West as a countermeasure.

In 2002, the CIA released a 17 page document on how Soviet Union’s Khrushchev declared he would ‘crush America’. Many have denied he ever said he and even Khrushchev denied it all in part. So a summary was developed to prove his words.

It appears Khrushchev’s original mission/objective is working well today. Bernie Sanders remains popular. The democrats are gaining legislatively with socialists programs and when it comes to education, teachers and professors teach it. No countermeasures. Even the New York Times admits it.

So, what about now or going forward? Will America’s adversaries will the propaganda war? Appears that debate continues and the mega tech companies like Google and YouTube, along with Facebook and Twitter prove there is selective operations which are counter to the legacy of the United States.

What actually does the Federal government spend today on counter-messaging or in cyber operations on nefarious foreign influence campaigns? Close to nothing. Khrushchev’s mission lives and thrives well today. Unless…

FBI Director Christopher Wray told Congress Thursday that the FBI has a “foreign influence” task force to deal with election interference by outside actors.

“I take any effort to interfere with out election system by Russia or any other nation state or non-nation state seriously, because it strikes right at the heart of who we are as a country,” Wray said, in a response to a question about the FBI’s response to Russia’s election meddling by Rep. Kathleen Rice (D-NY). Wray was appearing at a hearing in front of the House Homeland Security Committee.

“We have a foreign influence task force inside the FBI that brings together difference disciplines of the FBI, because it’s a multidisciplinary problem,” Wray said. “You’ve got a counterintelligence dimension, a cyber dimension, a criminal dimension. We coordinate closely with the [Department of Homeland Security], which has a responsibility for the criminal infrastructure portion.”

He added that the FBI is coordinating with foreign partners as well.

“We can learn from what Russians and others are trying to do with other elections, in terms of trade craft, etc.” Wray said. “We’re trying to get in front of it and be on the lookout for efforts to interfere.”

The FBI’s press office did not respond to TPM’s inquiry as to exactly when the task force was launched and for more details on its operations.

Wray’s comments come after Attorney General Jeff Sessions, on multiple occasions, struggled to tell Congress what the Justice Department was doing to prevent future foreign influence in elections. President Trump has continued to play down Russia’s attempts to meddle in the 2016 campaign, an assessment made by the intelligence community.

*** There is a short window and frankly short-sightedness when it comes to dealing with fake news and propaganda. It cannot be denied that the Soviet Union and now Russia interferes in all things inside America. Chaos is common and division is festering off the charts. Is America destroying herself from within and is Russia exploiting that? Yes….

Messaging starts at home where proven models can be applied globally as necessary. Has there been a successful to examine and restore education? No. Has there been successful counter-measure to Black Lives Matter? No. Is there any campaign to stop socialism, Marxism or communism in America? No.

Is Russia on an operation to bury America as Khrushvhev declared more than once in various forms? Yes. 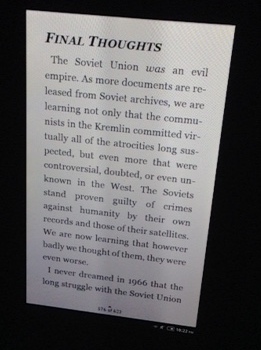 This is a particular page from Robert Gates book titled ‘From the Shadows‘ published in 1996. This page is a profound and historical statement made long before political correctness and the deeper divide and chaos.