The agency’s Office of Foreign Assets Control said Friday it is imposing sanctions on members of the networks that finance the terrorist organization Hezbollah in Lebanon and Kuwait, according to the Epoch Times.

The companies are either directly or indirectly owned, controlled or directed by Morteza Minaye Hashemi, an Iranian businessman living in China who’s also on the sanctions list.

Hashemi is accused by the U.S. government of funding the Islamic Revolutionary Guard Corps-Quds Force, the Epoch Times also reports. 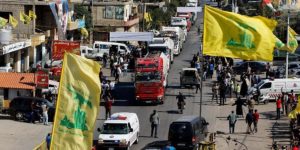 The designations came as part of a broader action by the department that targeted Lebanon and Kuwait-based financial conduits that fund the Lebanese Shiite group Hezbollah as well as financial facilitators and front companies that support the group and Iran.

Black Drop International Co could not be found in the Hong Kong government’s company registry when the Post did a search on Saturday night. Detailed information on the other companies, such as the owners’ names and office addresses, was also not accessible.

Hashemi, Yan Su Xuan, Song Jing and the seven companies named by the Treasury department join a list of 351 entities still sanctioned under an executive order signed by former president George W Bush shortly after the terrorist attacks against the US on September 11, 2001.

The Treasury Department said international networks have laundered tens of millions of dollars through regional financial systems and conducted currency exchange operations and trades in gold and electronics for the benefit of both IRGC-QF.

Hezbollah, with the support of the IRGC-QF, uses the revenues generated by these networks to fund terrorist activities, as well as to perpetuate instability in Lebanon and throughout the region, the department said.