It started in 2008, where the Republicans were against it but the Democrats were for it.

The whole project was underway and President Obama ponied up Federal dollars for the project, like $3.8 billion which Governor Newsom refuses to pay back to ‘Donald Trump’. Hummm, it is not President Trump’s money, it belongs to the U.S. taxpayer. Hello…border wall?

It is important to note that the California Governor canceled the high speed rail over the voters of California under Proposition 1A.

The whole mess from the beginning was full of corruption and much of that fraud sits on the desk of California Attorney General Becerra. Swell….

Remember, the first Federal installment occurred under the Obama regime with a $2.5 billion investment under that pesky American Recovery and Reinvestment Act….$2.5 billion to be exact.

But after spending $3 billion of the fed’s money and $7.8 billion from California bond sales and revenue from the state’s infamous cap-and-trade taxes, Cal HSR has failed to lay a mile of track over the initial 32-mile section of flat San Joaquin Valley farmland.

Rather than demand the money back from Tutor-Perini/Zachry/Parsons, its project and construction manager (PCM), Cal HSR recently voted to extend the term of the contract by 6 months and to raise the price from $34.2 million to $40.2 million, an 18 percent bump.

The move is even more extraordinary given that Cal HSR admits that the professional service contract was “based on qualifications of PCM and its 25 staffing resources, as opposed to low bid.” That means Tutor-Perini/Zachry/Parsons employees, even if they worked exclusively on Cal HSR, are each being paid an average of $240,000 for the next six months of work.

Cal HSR told the Fresno Bee that the delays were due to extended environmental impact reviews and the protracted pace of acquiring 822 parcels of mostly farmland, either through negotiated purchase or suing under eminent domain.  More details here. 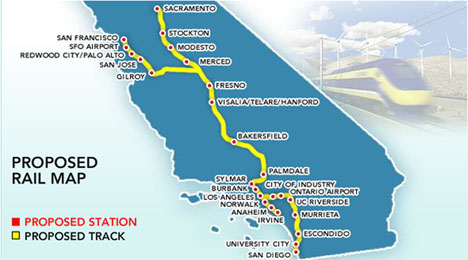 With a price tag so far of $77 billion, Governor Newsom is somewhat equivocating on the whole thing. Seems there is no plan on paper or a timetable. Further, there are all kinds of lawsuits when it comes to environmental impact, evaluations and where if any, a rail system would continue in that state. California with the funding of the high speed rail also committed at the same time to electrifying commuter lines from San Jose to San Francisco as well as modernizing community development and station planning. This is a state that has a major homeless problem not to mention housing issues mostly due to land use restrictions and Silicon Valley employment.