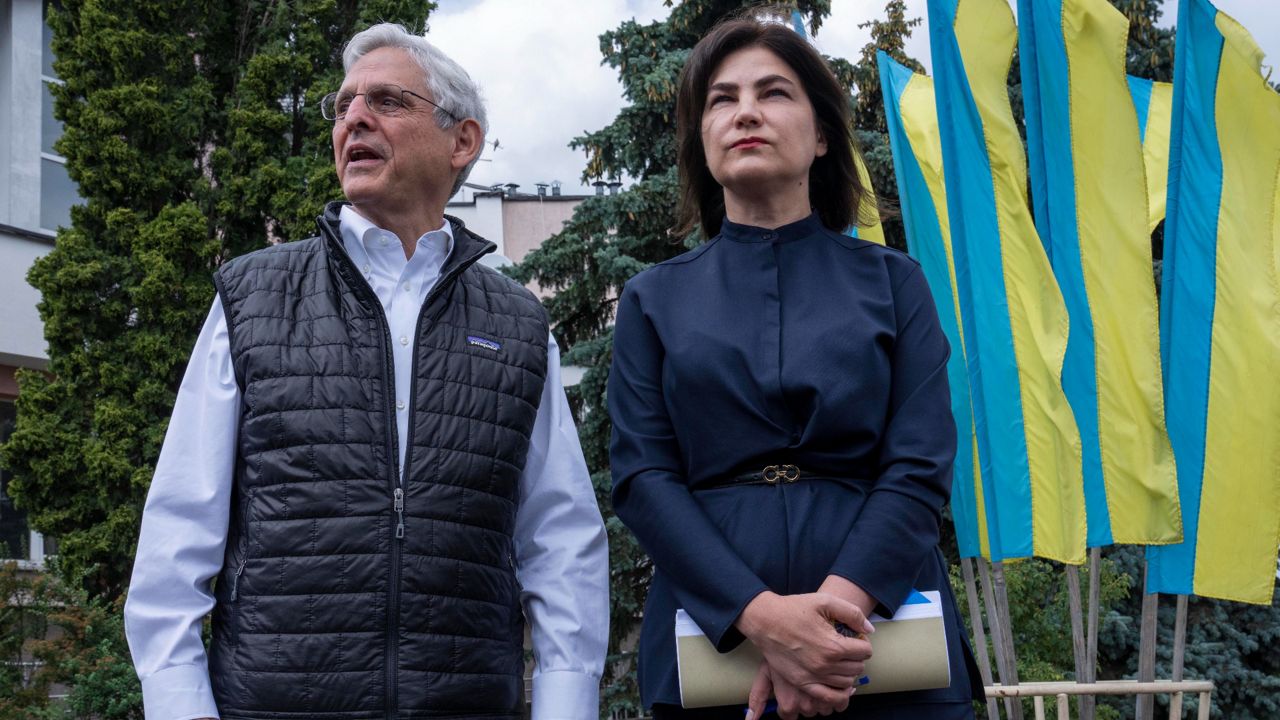 Umm…Interesting timing…understand the size and bona fides of this envoy and why would Attorney General Merrick Garland himself need to go to Ukraine? I submit it is due in part to the Biden Crime family and that laptop….could it be that something is about break or is there some evidence that requires sequestering…..

But you decide and read on….

“There is no hiding place for war criminals. The U.S. Justice Department will pursue every avenue of accountability for those who commit war crimes and other atrocities in Ukraine.”

In a meeting with Ukrainian Prosecutor General Iryna Venediktova, Attorney General Merrick B. Garland commended the efforts of the Ukrainian people to defend democracy and uphold the rule of law, and announced additional U.S. actions to help Ukraine identify, apprehend, and prosecute those individuals involved in war crimes and other atrocities in Ukraine.

“The United States stands in solidarity with the people of Ukraine in the face of Russia’s continued aggression and assault on Ukraine’s sovereignty and territorial integrity,” said Attorney General Garland. “America – and the world – has seen the many horrific images and read the heart-wrenching accounts of brutality and death that have resulted from Russia’s unjust invasion of Ukraine.”

Specifically, Attorney General Garland announced the launch of a War Crimes Accountability Team to centralize and strengthen the Justice Department’s ongoing work to hold accountable those who have committed war crimes and other atrocities in Ukraine. This initiative will bring together the Department’s leading experts in investigations involving human rights abuses and war crimes and other atrocities; and provide wide-ranging technical assistance, including operational assistance and advice regarding criminal prosecutions, evidence collection, forensics, and relevant legal analysis. The team will also play an integral role in the Department’s ongoing investigation of potential war crimes over which the U.S. possesses jurisdiction, such as the killing and wounding of U.S. journalists covering the unprovoked Russian aggression in Ukraine.

“There is no hiding place for war criminals. The U.S. Justice Department will pursue every avenue of accountability for those who commit war crimes and other atrocities in Ukraine,” said Attorney General Garland. “Working alongside our domestic and international partners, the Justice Department will be relentless in our efforts to hold accountable every person complicit in the commission of war crimes, torture, and other grave violations during the unprovoked conflict in Ukraine.”

To lead this effort, the Attorney General has tapped Eli Rosenbaum to serve as Counselor for War Crimes Accountability. Rosenbaum is a 36-year veteran of the Justice Department who previously served as Director of the Office of Special Investigations (OSI), which was primarily responsible for identifying, denaturalizing, and deporting Nazi war criminals. In his role as Counselor for War Crimes Accountability, Rosenbaum will coordinate efforts across the Justice Department and the federal government to hold accountable those responsible for war crimes and other atrocities in Ukraine. Rosenbaum will be joined in his work by other prosecutors from the Human Rights and Special Prosecutions Section (HRSP), including Acting Section Chief Hope Olds and prosecutors Christian Levesque, Christina Giffin, and Courtney Urschel.

In addition, the Justice Department will provide additional personnel to expand its work with Ukraine and other partners to counter Russian illicit finance and sanctions evasion. Among other things, the Department will provide Ukraine an expert Justice Department prosecutor to advise on fighting kleptocracy, corruption, and money laundering. In addition, it plans to deploy two expert attorneys from the Office of International Affairs (OIA) – one to a U.S. Embassy in Europe, and another to a U.S. Embassy in the Middle East – in support of the Department’s KleptoCapture Task Force. These senior attorneys will work closely with their counterparts in EU member states and Middle Eastern countries to facilitate mutual legal assistance and extraditions relating to Russian illicit finance and sanctions evasion, including with respect to designated Russian oligarchs who have supported the Russian regime and its efforts to undermine Ukrainian sovereignty.

Attorney General Garland announced the KleptoCapture Task Force in March to further leverage the Department’s tools and authorities against efforts to evade or undermine the economic actions taken by the U.S. Government in response to Russian military aggression. Since then, the task force has facilitated the seizure of superyachts of two sanctioned individuals with close ties to the Russian regime; dismantled Russian criminal networks; and enforced sanctions violations, among other actions.