A former infantry officer in the U.S. army, Ambassador Jeffrey served in Germany and Vietnam from 1969 to 1976.

James Jeffrey—who is retiring from his posts as the Special Representative for Syria Engagement and Special Envoy to the Global Coalition to Defeat ISIS — reportedly said that “shell games” have been used to avoid telling U.S. leaders the true number of American troops in Syria.

“We were always playing shell games to not make clear to our leadership how many troops we had there,” Jeffrey said, according to Defense One.

Jeffrey reportedly said that when President Donald Trump was interested in withdrawing from Syria, arguments against a withdrawal were presented to the commander in chief.

“What Syria withdrawal? There was never a Syria withdrawal,” Jeffrey told the outlet. “When the situation in northeast Syria had been fairly stable after we defeated ISIS, [Trump] was inclined to pull out. In each case, we then decided to come up with five better arguments for why we needed to stay. And we succeeded both times. That’s the story.”

The president last year officially agreed to maintain some troops in Syria, according to Defense One.

While Jeffrey in 2016 prior to the presidential election signed onto an anti-Trump letter with other individuals who had previously served under Republican administrations, Defense One noted that Jeffrey’s advice for the Biden administration is to persist in the course set by President Trump’s team.

Media outlets have projected Joe Biden to be the winner of the presidential contest, but Trump has not conceded. 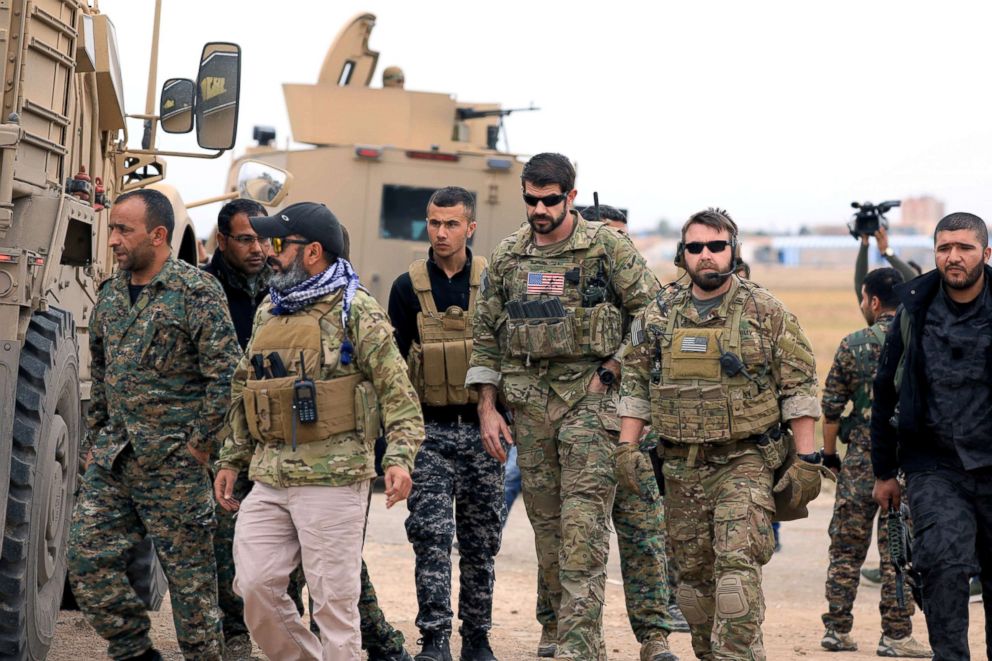 For more context in part:

Under a “security mechanism” negotiated by Jeffrey’s team, the SDF had agreed to destroy its fortifications along the Turkish border and allow joint U.S.-Turkish patrols on its soil, in exchange for protection from a further Turkish attack.

“Those troops were not there to protect the Kurds from the Turks,” Jeffrey said, referring to U.S. troops that Trump moved away from the border after an October 6 phone call with Turkish president Recep Tayyip Erdoğan. “The purpose of the president’s phone call was to dissuade [Erdoğan] from something in the days past we had become convinced was no longer a possibility but a probability.”

Jeffrey claimed that Turkey did not see U.S. forces as a deterrent. But when pressed, he confessed to Rep. Brad Sherman (D-CA) that Turkey would “absolutely not” kill American troops in Syria. He also tried to minimize his role in the decisionmaking process.

“I have never briefed the president,” Jeffrey said.

“Between the fourth and the sixth [of October], I had at least one conversation with [Secretary of State Mike] Pompeo,” he continued. “Secretary Pompeo has been consulted very, very frequently, almost daily by the president on Syria issues.”

“The SDF has long had relations with Russia and the Assad government,” Jeffrey claimed. “We also never told them that we couldn’t.” Read more here.

But the U.S. government had reportedly blocked an agreement between the SDF and Bashar al-Assad prior to the withdrawal of U.S. troops from the region.

The National Interest reported yesterday that Jeffrey had slowed efforts by the State Department to condemn the murder of Syrian Kurdish politician Hevrin Khalaf by Turkish-backed paramilitaries.

For the first time in public, Jeffrey addressed accusations that Turkish forces had used white phosphorus, an incendiary chemical, on civilian areas. Lawmakers noted that they had received no notice from the Trump administration on the alleged use of chemical weapons.

“I haven’t heard anything about that [from the State Department] other than here,” Rep. Chrissy Houlahan (D–MD) pointed out.

So, Jeffrey changed the subject to alleged war crimes by Bashar al-Assad, the Iranian- and Russian-backed ruler of the Syrian central government.

The first U.S. troops arrived in Syria under the Obama administration in Oct. 2015 to push back ISIS. At its peak, ISIS controlled territories across Iraq and Syria that were home to about 10 million people.

Fifty American advisers were initially sent to Syria. That number grew to more than 500, according to the Pentagon, before officials acknowledged there were approximately 2,000 U.S. troops in Syria.

The role of the U.S. troops has been to advise and assist the Syrian Democratic Forces (SDF) — a Kurdish-led force that now numbers more than 50,000 and is about 40 percent Arab. The U.S. is not involved in direct combat unless it is for self-defense.