We pray for the victims and Waukesha. There are children and adults in serious medical condition at a few hospitals and we can only pray for full recovery.

Meanwhile, we have to wonder why Facebook and Google did not alert law enforcement to the various posts as Brooks predicted this act of his. Was he on the FBI’s radar? Seems we also continue to have major law enforcement with District Attorneys tied to George Soros.

Scanner traffic from the area revealed that a driver license found in the abandoned Ford Escape belonged to Darrell Brooks Jr. When located, he had a key to a Ford on him according to scanner traffic and he was complaining of shoulder pain. A red vehicle similar to the Ford Escape is shown on Google Maps for the address listed to Brooks in Wisconsin online court records. That home is where Milwaukee officers were located shortly after the incident. Brooks also gave that same address in regard to an open felony case just days before the tragedy according to Heavy. 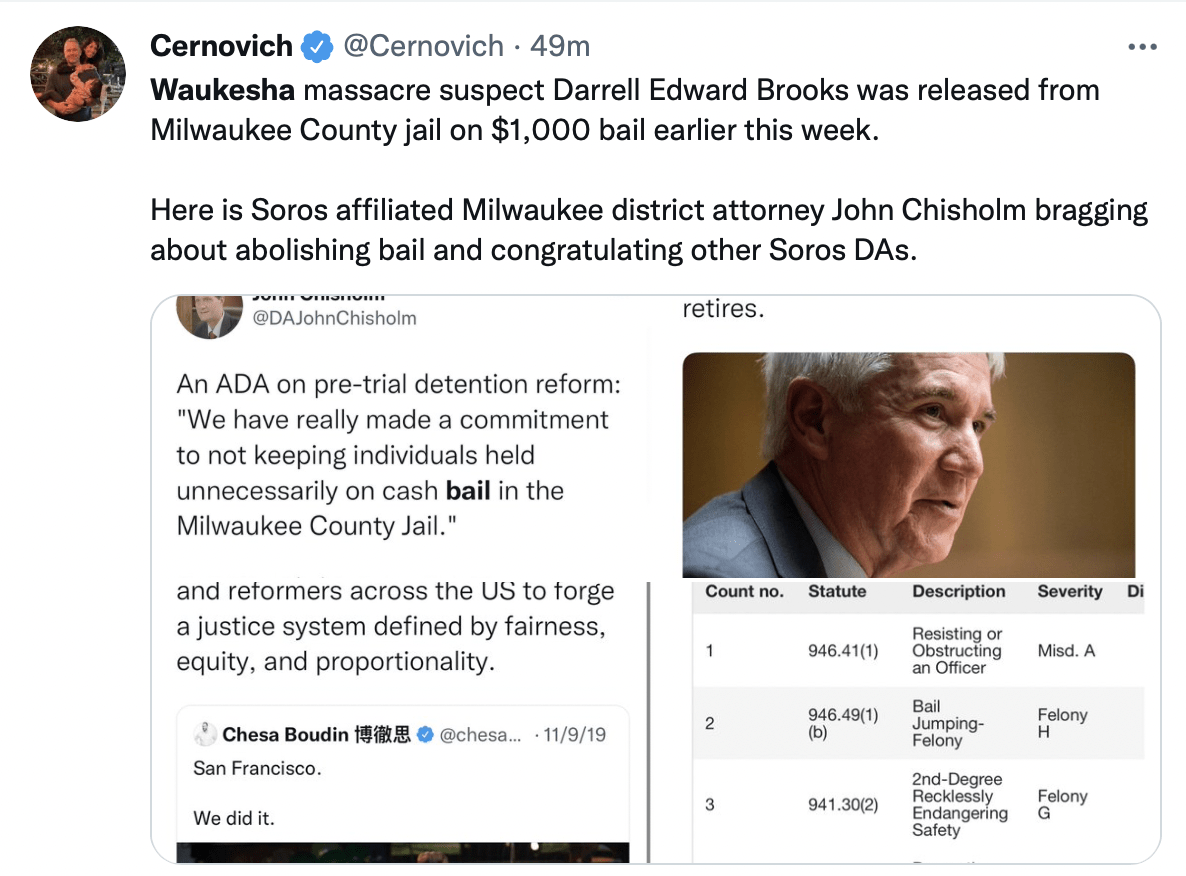 Brooks was released from prison on a cash bail of $1,000 on November 19, only two days before he committed the mass casualty event, a court record shows. The sheriff posted the bond on November 11.

In 2016, Brooks re-posted a quote in 2016 on a now-deactivated Facebook account that read: “Run them over. Keep traffic flowing & don’t slow down for any of these idiots . . . ,” according to independent journalist Andy Ngo. Other anti-police content was also featured on Brooks’s feed. As for his profession, Brooks is reportedly a rapper, according to a music video that Ngo uncovered.

According to a Twitter user, the suspect, Darrell E. Brooks of Milwaukee, has “25 different mugshots from multiple states.” Brooks slammed his red Ford Escape into a crowd of people celebrating in Waukesha, killing five people and injuring 40 others. Brooks is currently in police custody, and social media users have discovered old Facebook posts in which he discussed “knocking white people off.” He’s been dubbed the “Face of Black Terrorism” because of this and a couple of other troubling posts he made on his page, which have since been removed.

Brooks, a rapper who goes by the moniker Mathboi Fly, has a number of felony cases pending against him. On November 5, he was charged with resisting an officer (misdemeanor), felony bail jumping, second-degree reckless safety (felony), disorderly conduct, and battery (all misdemeanors with domestic abuse assessments) in Milwaukee court. On November 19th, according to records, he posted $1000 bail. Since the late 1990s, he has been on the wrong side of the law. In 1999, he was charged with a serious felony, marijuana possession (felony) in 2002, and obstructing an officer (misdemeanor) in 2003 and 2005. According to reports, Brooks has a long history of arrests, which can be found here.