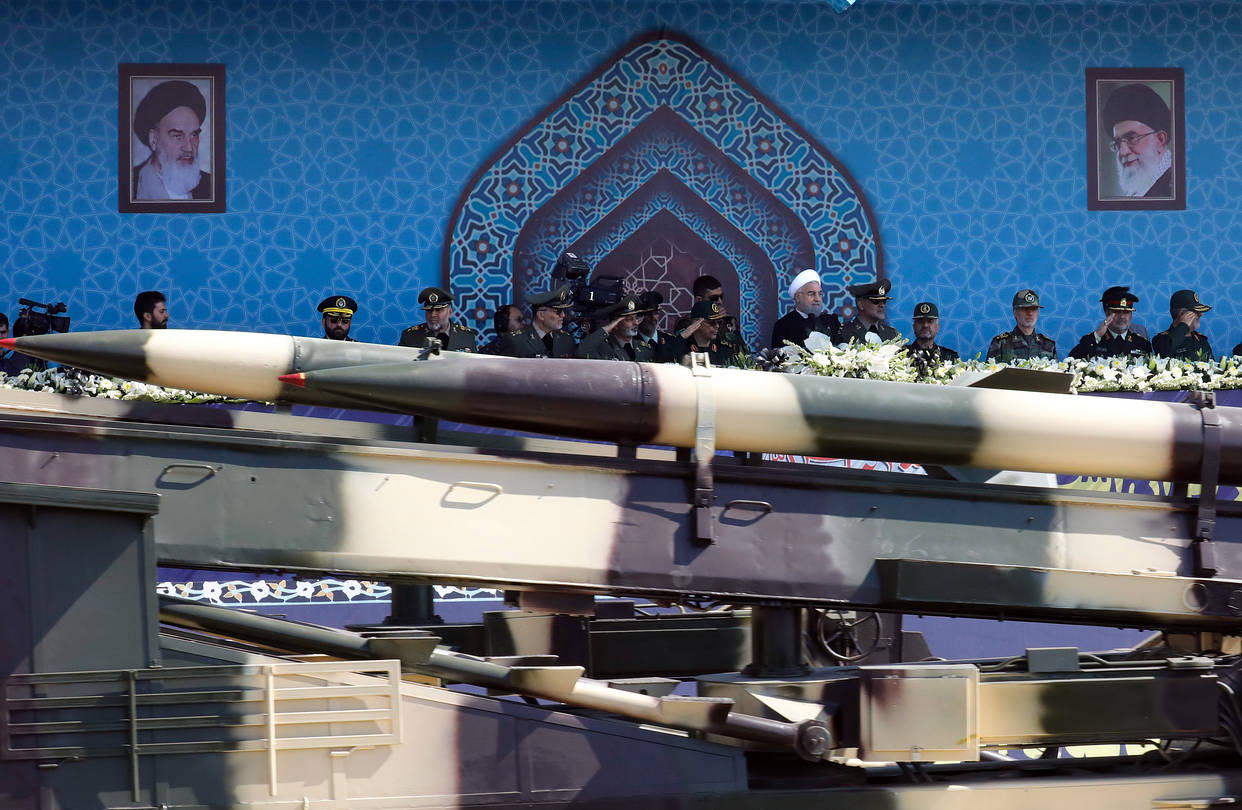 It is a globally business and a nasty one.

U.S. officials have long accused Iran of supplying arms to rebel Houthi forces battling for control of Yemen. But Monday’s sanctions help highlight the scope of what Western officials commonly describe as the IRGC’s far-reaching and malign activities.

“Iran itself, together with its proxy, Lebanese Hezbollah, is knee-deep and has been knee-deep in the counterfeit business for quite some time,” said Matthew Levitt with the Washington Institute for Near East Policy. “Exposing this is kind of a two-for one, both exposing the organization’s terrorist activity and also exposing the nature of the criminal activity that it engages in.” More here.

“This scheme exposes the deep levels of deception the IRGC-Qods Force is willing to employ against companies in Europe, governments in the Gulf, and the rest of the world to support its destabilizing activities.  Counterfeiting strikes at the heart of the international financial system, and the fact that elements of the government of Iran are involved in this behavior is completely unacceptable,” said Treasury Secretary Steven Mnuchin.  “This counterfeiting scheme exposes the serious risks faced by anyone doing business with Iran, as the IRGC continues to obscure its involvement in Iran’s economy and hide behind the façade of legitimate businesses to perpetrate its nefarious objectives.”

Reza Heidari (Heidari) is being designated today for having acted for or on behalf of the IRGC-QF and having assisted in, sponsored, or provided financial, material, or technological support for, or financial or other services to or in support of, the IRGC-QF.

Pardavesh Tasvir Rayan Co. (Rayan Printing) is being designated today for being controlled by Heidari; for having acted for or on behalf of the IRGC-QF; having assisted, sponsored, or provided financial, material, or technological support for, or financial or other services to or in support of, the IRGC-QF; and being owned by Tejarat Almas Mobin Holding, another Iranian company also being designated today.

Heidari played a key role in procuring secure printing equipment and materials for the IRGC-QF in support of the group’s currency counterfeiting scheme.  Heidari served as the managing director of Iran-based Rayan Printing, a company involved in printing counterfeit Yemeni rial bank notes potentially worth hundreds of millions of dollars for the IRGC-QF, as of late 2016.  Heidari used front companies to obfuscate the actual end user and facilitate deceptive transactions when dealing with European suppliers of secure printing equipment and materials.

ForEnt Technik GmbH is being designated today for being owned or controlled by Heidari, while Printing Trade Center GmbH (PTC) is being designated for having acted for or on behalf of, and assisted in, sponsored, or provided financial, material, or technological support for, or financial or other services to or in support of, Heidari.

Seif is the managing director of Tejarat Almas Mobin, the parent company of Rayan Printing.  Heidari and Seif coordinated on the procurement of raw supplies and equipment that enabled the IRGC-QF counterfeiting capabilities.  Seif was involved with the logistics of importing materials for the counterfeiting project into Iran.  Additionally, Seif has previously been involved in the procurement of weapons for the IRGC-QF.

For identifying information on the individuals and entities listed today, click here: https://www.treasury.gov/resource-center/sanctions/OFAC-Enforcement/Pages/20171120.aspx

*** So, did Iran teach North Korea to counterfeit or was it the other way around? North Korea has been counterfeiting and participating in illicit activities going back decades. North Korea is not especially fretful over the newly applied sanctions or being listed again as a terror state by President Trump. While it should be done, the regime has proven methods to finesse the system.

Ri Jong Ho had simply had enough. He’d seen too many executions.

Ri, a high-profile North Korean defector, spent years working for what is essentially a slush fund for one of the most notorious regimes on the planet, Kim Jong Un and his compatriots.
Life was good. Ri helped bring in somewhere between $50 million and $100 million for North Korean elites, and was handsomely rewarded with luxuries most North Koreans couldn’t dream of in years past: a car, a color TV and some extra cash on the side, once rarities in the communist state but more commonplace now in the capital, Pyongyang.
But he watched the regime kill his peers and their families, even children.
“It was not just high level officers, officials, but their families, their children (and) their followers,” Ri told CNN in his first interview to a major US broadcast network. “It was not just once or twice a year — it was ongoing throughout the year, thousands of people being executed or purged.”
Ri said the final straw came in late 2013, when Kim Jong Un executed his own uncle, Jang Song Thaek, with an anti-aircraft gun.
“It was a cruel and crude method of execution,” he said. “After all these years living in the socialist system, I never witnessed anything like that.”
Ri was living in China at the time, and in 2014 was able to safely defect with his family.
And just like that, Kim lost one of his top money makers.

Ri said he worked for decades in what’s known as “Office 39.”
The office is in charge of bringing in hard currency for the regime. Ri calls it a “slush fund for the leader and the leadership.”
Ri told CNN “Office 39” is not engaged in illicit activities, but the US Treasury Department says otherwise.
The US government accused the office of engaging in “illicit economic activities” to support the North Korean government. It has branches throughout the nation that raise and manage funds and is responsible for earning foreign currency for North Korea’s Korean Workers’ Party senior leadership through illicit activities such as narcotics trafficking.
North Korea has been accused of crimes like hacking banks, counterfeiting currency, dealing drugs and even trafficking endangered species.
Workers who help bring in cash for the regime are granted access to the outside world — especially China — in order to establish networks that are crucial to making money, analysts say. They often have diplomatic privileges that allow them to evade their host country’s domestic laws, experts say.
Ri said he was not involved in illegal activities and that they were not under the purview of Office 39, but did not deny they occurred. He said much of North Korea’s hard cash is earned through exporting labor — the country sends workers across the globe and collects much of their pay, according to the UN — and exporting natural resources like coal, which China used to buy but has since stopped.
Illicit activities make a lot of money, though. The Congressional Research Service estimated in 2008 that North Korea could earn anywhere from $500 million to $1 billion from these types of illicit activities.
That money helps fund the lavish lifestyles of the North Korean elites while sanctions limit the country’s ability to make money. That keeps North Korea’s leadership happy and helps Kim prevent coup attempts, analysts say.
“They (North Korean leaders) are focused on maintaining their ruling power, and they are working on making this dynasty-like system lasting for a long time,” Ri said. “So instead of focusing on their economic development or better life, they are more focused on maintaining their system.
Some of Office 39’s profits also go to the country’s nuclear and missile programs, which crossed an important threshold this month with the testing of two intercontinental ballistic missiles, weapons that experts say likely put the United States homeland in North Korea’s range.
CNN reached out to the North Korean mission at the United Nations for a response to the interview with Ri. An official at the mission said Ri was lying to “make money and save his own life.”

Analysts say Office 39 is likely now in the cross hairs of US President Donald Trump’s administration.
The Trump team has made it clear that one of the ways it plans to deal with North Korea is to squeeze its revenue streams across the globe in order to pressure them into negotiations over their weapons programs.
Who speaks for the United States on North Korea? Contradictions emerge
Ri is not sure if the tactic will work, as he says it’s easy to side-step sanctions and believes the international community has made strategic mistakes that could come back to bite them.
North Korean companies can just change their names once sanctioned, he says. North Korean leaders don’t keep much money abroad, so the sanctions against them are pointless, according to Ri. Smugglers are difficult to catch.
“Smuggling is conducted by any and every means you could imagine. Mostly larger items are done using ships, for example by filing a cargo list … where what’s written on the (list) is different from what is really being shipped,” he said. “On the open sea, the Yellow Sea, there are hundreds of fishing boats — both from China and North Korea — and all the smuggling is done by these so-called fishing boats.

Ri believes that secondary sanctions — targeting those who do business with North Korea, like the United States did to China’s Bank of Dandong in June — is the way to go, especially in China.
Beijing accounts for about 85% of North Korean imports in 2015, according to UN data, though Ri revealed that Pyongyang does import some oil from Russia.
North Korean economist Ri Gi Song told CNN in February that China accounts for 70% of trade and that trade with Russia is increasing. More here from CNN.