Primer: January 2020 by the Justice Department/ CDG is a violent Mexican criminal organization engaged in the manufacture, distribution, and importation of ton quantities of cocaine and marijuana into the United States. In the late 1990s, the Gulf Cartel recruited an elite group of former Mexican military personnel to join their ranks as security and enforcers who became known as Los Zetas. The Gulf Cartel and Los Zetas operated under the name of “The Company.” Costilla-Sanchez became the leader of The Company for several years following the arrest of Osiel Cardenas in 2003 and before Costilla-Sanchez’s arrest in September 2012. More details here. 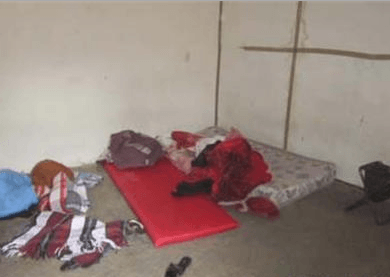 So, with that already classified, and with stash houses operating inside the United States, why has it not been declared a domestic terror organization and where are the arrests by Federal agents?

Nearly 930,000 illegal migrant crossing were reported by CBP through the end of May

The migrants were found crammed inside what appeared to be an old car garage, enduring extreme heat and harsh living conditions.

Border Patrol officials told Fox News that smugglers keep migrants in stash houses located near the southern border before dispersing them deeper into the U.S.

The insignia for “Cartel Del Golfo,” which means Gulf Cartel, was spray-painted on one of the interior garage walls – which law enforcement said was the cartel’s method for laying claim to the operation.

Exclusive: We were tipped off to a large human smuggling stash house in Alton, TX here in the RGV. Law enforcement on scene told us there were 107 people crammed together inside in the heat & humidity. Smugglers keep migrants in these before moving them further into U.S. @FoxNews pic.twitter.com/ePt7qOc91n

Law enforcement initially said 107 migrants were found at the house before upping the count by one.

Officials identified one migrant caretaker during their apprehension near Alton, Texas Monday, but did not confirm whether he was involved in the running of the smuggling operation.

Stash houses like the garage discovered Monday are not rare sights for Border Patrol agents.

One hour after the stash house in Alton was discovered, CBP reported that a residence near Rio Grande City was found to have been harboring 23 adult migrants.

Fox News could not immediately reach CBP to confirm the number of stash houses found in 2021 but earlier this month local news outlet KGNS reported that over 4,000 migrants had been arrested in more than 200 dismantled stash homes.

CBP has reported nearly 930,000 illegal immigrant encounters at the southern border since January.

More than 180,000 migrants were encountered in May alone.