Item 7 of leaked intelligence cables from 2012 explains conditions on status of weapons. 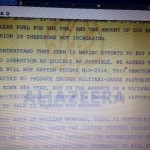 From an IAEA brief noted December 2014:
*Iran has had a nuclear weapons program since at least the late 1980s.
*In 1989, it set up a management structure for the program responsible to the Ministry of Defence, which it has reorganized over the years.
*At the start, a lot of Iran’s technical knowledge to produce nuclear weapons came from the same underground network which helped countries like Libya. *Iran has also been getting help from an unnamed “nuclear weapon state” (Russia? China?), but it has developed considerable scientific and technical capabilities of its own.
*The program has involved extensive procurement activity, much of it clandestine using false front companies, but benefitting from the fact that many of the components sought have both civilian and military applications.
*In addition to enriching uranium, Iran has been working on converting highly enriched uranium (HEU) into metal, and casting and machining it into the components of a nuclear core.
*It has done modelling and calculations on how an HEU device would function.
*Engineering work has been done on integrating a nuclear device into a missile delivery vehicle.
*Iran has been experimenting with a multipoint initiation system, with the explosives used having the dimensions of a payload that would fit into the warhead chamber of an Iranian Shahab 3 missile which has a range of some 1300 kilometers. (Iran is also working on a longer range missile.)
*Iran has been working on the development of safe, fast-acting detonators which can be triggered within a microsecond of each other in order to set off an implosion-type nuclear device.
*Work has been done on a prototype system for fuzing, arming and firing a nuclear weapon which could explode both in the air above a target and on impact.
*Iran has conducted a number of practical tests to determine how firing equipment might function over long distances with a test device located down a deep shaft; and it has studied safety arrangements for conducting a nuclear test.

By the next decade, according to the IAEA, the regime would consolidate its weaponization researchers under an initiative called the “AMAD Plan,” headed by Mohsen Fakhrizadeh, a Ph.D. nuclear engineer and senior member of the Islamic Revolutionary Guard Corps.

The AMAD Plan was charged with procuring dual-use technologies, developing nuclear detonators and conducting high-explosive experiments associated with compressing fissile material, according to Western intelligence agencies. The AMAD Plan’s most intense period of activity was in 2002-03, according to the IAEA, when current President Hasan Rouhani headed Iran’s Supreme National Security Council before becoming its chief nuclear negotiator.

Feeling the heat from the MEK’s disclosure of two nuclear facilities in 2002 and the 2003 U.S. invasion of Iraq, the mullahs apparently halted the AMAD Plan’s activities in late 2003. But Mr. Fakhrizadeh and his scientists didn’t stop their weaponization work. As former United Nations weapons inspector David Albright told us, “Fakhrizadeh continued to run the program in the military industry, where you could work on nuclear weapons.” Much of the work, including theoretical explosive modeling, was shifted to Defense Ministry-linked universities, such as Malek Ashtar University of Technology in Tehran.

Mr. Fakhrizadeh has continued to oversee these disparate and highly compartmentalized activities, now under the auspices of Iran’s new Organization of Defensive Innovation and Research, known by its Persian acronym, SPND. The MEK first disclosed the SPND’s existence in 2011. Now the opposition group has obtained what it says are key new biographical details and the first photograph of the 56-year-old Mr. Fakhrizadeh, whom Iran has refused to make available to the IAEA for long-sought interviews.

The MEK has also compiled a list of what it says are 100 SPND researchers. Far from disbanding the SPND, the MEK alleges, the Tehran regime has kept its nucleus of researchers intact. Possibly to avoid detection by the IAEA, the MEK says, the regime recently relocated the SPND’s headquarters from Mojdeh Avenue in Tehran to Pasdaran Avenue. “The new site,” the MEK adds, “is located in between several centers and offices affiliated to the Defense Ministry . . . , the Union of IRGC, the sports organization of the Defense Ministry . . . and Chamran Hospital.”

To further mask the illicit nature of the relocation from the IAEA, the MEK says, “parts of Malek Ashtar University’s logistical activities were transferred to the former site of SPND. The objective was to avoid closing [the former] center, and in the event of inspections, to claim that the site has always had the current formation.” Don’t expect the regime to fess up to much of this by the August 25 deadline set in its joint communique with the IAEA.

The fact that the IAEA and the Western powers are now turning to the weaponization question is a sign of how far the Iranian nuclear-weapons program has progressed. As the Nonproliferation Policy Education Center’s Henry Sokolski, a former nonproliferation director at the Pentagon, told us: “A concern about weaponization followed by testing and use is the moral hazard when you don’t pay attention to fissile-material production.”

In other words, having ceded a right to enrich and permitted the Islamic Republic to develop an advanced enrichment capability, the West is now left with preventing weaponization as the final barrier against a nuclear-capable Iran. The diplomacy of Mr. Rouhani and his Foreign Minister, Javad Zarif, is intended to soothe jittery Western nerves on weaponization.

That palliative effect will be reinforced by the IAEA’s latest quarterly report, also released last week, in which the Agency reported that Iran has sharply reduced its stock of 20% uranium and hasn’t enriched above 5% since the November interim agreement took effect. The report also highlights the Islamic Republic’s new willingness to address at a technical level the “possible military dimensions to Iran’s nuclear program,” including Tehran’s development of exploding bridge-wire detonators and high-explosives testing.

But if past is precedent and the MEK’s new disclosures are to be believed, Mr. Fakhrizadeh will continue to do his work as he has to this day. The snake may shed its skin but not its temper, runs an old Persian proverb.