Primer: The 8th person at the Trump Jr. meeting was Ike Kaveladze. He currently serves as Vice President of the Crocus Group in Moscow. Mr Balber, the lawyer for Kaveladze, said he revealed the identity of the eighth participant after receiving a call from a representative of special counsel Robert Mueller – the first indication that the Justice Department investigator is looking into the meeting. Previously, Federal investigators say Kaveladze immediately began laundering money for Russians.

Kaveladze was the president of International Business Creations, a Delaware corporation. Between 1991 and 2000, IBC and sister corporation Euro-American moved $1.4 billion from Eastern Europe through U.S. banks and back to Europe, the Government Accountability Office found in 2000. 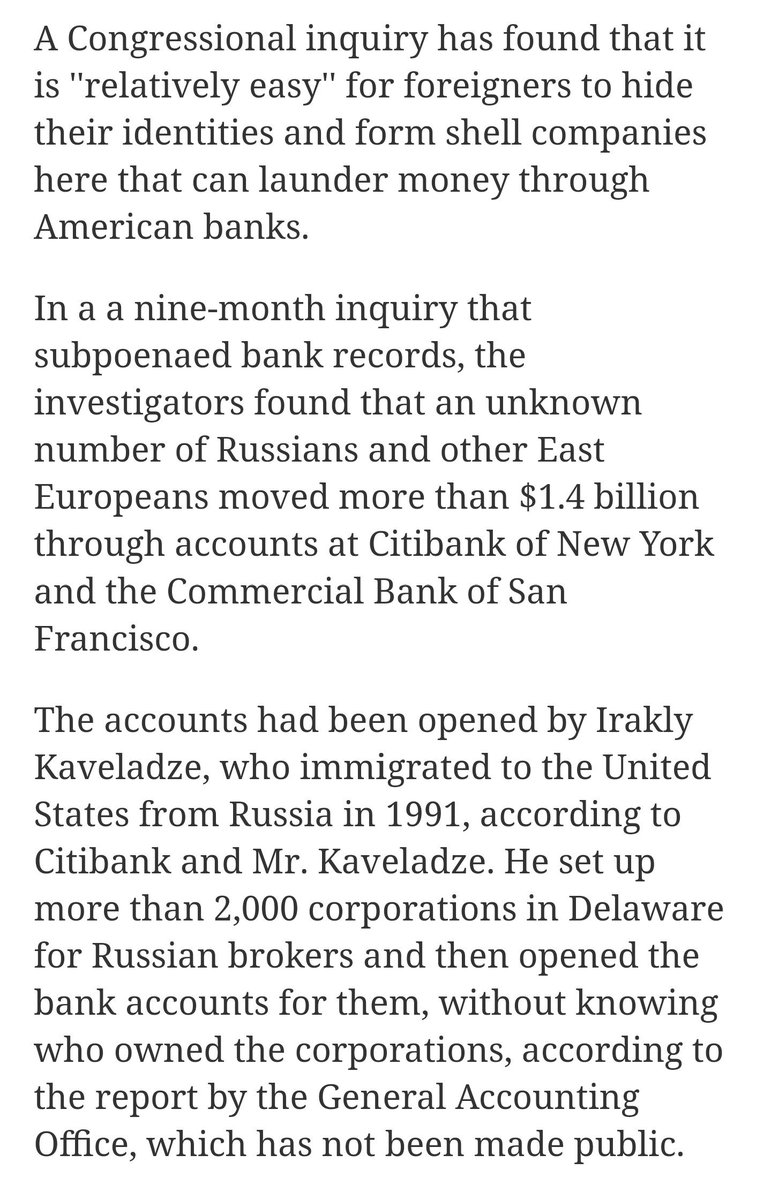 But let’s go back to Bill and Hillary shall we? We may determine just why President Trump backed off his campaign pledge and decided not to prosecute Hillary…

THE CLINTON FAMILY BUSINESS There may be no Clinton Foundation office in Moscow or St. Petersburg, but it is not for lack of trying. Bill Clinton received half a million dollars in 2010 for a speech he gave in Moscow, paid by a Russian firm, Renaissance Capital, that has ties to Russian intelligence. The Clinton Foundation took money from Russian officials and oligarchs, including Victor Kekselberg, a Putin confidant. The Foundation also received millions of dollars from Uranium One, which was sold to the Russian government in 2010, giving Russia control of 20% of the uranium deposits in the U.S. —  the sale required approval from Hillary Clinton’s State Department. What’s more, at least some of these donations weren’t disclosed. “Ian Telfer, the head of the Russian government’s uranium company, Uranium One, made four foreign donations totaling $2.35 million to the Clinton Foundation. Those contributions were not publicly disclosed by the Clintons, despite an agreement Mrs. Clinton had struck with the Obama White House to publicly identify all such donors,” the Times has reported.

Stephen Jennings is the co-founder and CEO of Renaissance Capital and in 2010 he resided over the launch of Tatu City, a planned community for 60,000 northeast of Nairobi.

Before that Vladimir Dzhabarov was a member of the FSB’s Department “K,” or its financial counter-intelligence division . From 2006-09, he was also the First Vice President at Renaissance Capital, a Moscow-based investment firm, which the 36 year-old Magnitsky claimed was involved in a six-long-year long conspiracy by an organized crime syndicate and Russian government officials to defraud the nation’s taxpayers. Renaissance Capital denies it had any part in any tax frauds; in 2009, the bank’s deputy chief executive Hans Jochum Horn told the New York Times that any illegal transactions involving Renaissance subsidiary companies took place after those companies had been sold off to new owners.

Magnitsky claimed in 2008 that criminals tied to Renaissance Capital, who were allegedly working in lockstep with tax and law enforcement agents, stole some $470 million by orchestrating illegal and complex tax refund schemes. As part of his sweeping investigation, Magnitsky claimed that in 2001-2002, Igor Sagiryan, the former president of Renaissance Capital, had supposedly commissioned named a fellow named Dmitry Klyuev to arrange a series of tax refunds through the corrupt Russian court system. This seconding of a known mobster to a seemingly legitimate financial institution was confirmed by Yuri Sagaidak, a former KGB general who was at the time the vice president of Renaissance Capital, in Russian court testimony.

The Klyuev Group, which U.S. Senator John McCain in 2012 urged President Obama to use an executive order to sanction wholesale as a “dangerous transnational criminal organization,”concocted its first nine-figure refund scheme in 2006, according to Magnitsky and others. The conspirators allegedly included the heads of Moscow Tax Offices 28 and 25, Olga Stepanova and Elena Khimina, respectively; Klyuev’s own attorney, Andrey Pavlov; and an Interior Ministry official, Major Pavel Karpov, who had previously investigated Klyuev for attempting to steal $1.6 billion worth of shares of a profitable Russian iron ore company. (Klyuev received a two-year suspended sentence in that case.)Read more here.

It has now emerged that the US Department of Justice has traced proceeds of the fraud to a bank account in Bournemouth held by Renaissance Capital Investment Management Ltd.

A chart produced by the US Department of Justice shows funds flowing through a series of foreign companies before being channelled into three main firms, including Prevezon, against which the DoJ is taking legal action to seize assets allegedly linked to the money, and the Bournemouth Renaissance account.

Renaissance Capital is a Moscow-based investment bank now controlled by billionaire oligarch Mikhail Prokhorov. Igor Sushchin, until recently the organisation’s head of IT security, was one of two FSB operatives accused by the FBI last month of hacking 500 million Yahoo email accounts. An indictment said it was “unknown” whether the firm “knew of his FSB affiliation”. Read more here for details and to help with the confusion.

*** In case you are wondering what Robert Mueller, the special investigator is looking at with this team, hold on this is going to get worse.

Magnitsky tracked money and found it all over the globe before he was murdered in a Russian prison, where the FSB arrested him for whistle-blowing.

According to records obtained by OCCRP, between Moscow and Geneva the money traveled all over the world in a veritable chain of shell companies set up by GT Group — a company that was connected to the sale of arms from N. Korea to Iran as well as laundering money for the Mexican Sinaloa Cartel.
The couple used the same Credit Suisse accounts to purchase two apartments valued at US$2 million each at Dubai’s Kempinksi resort for tax office deputies Elena Anisimova and Olga Tsareva. According to bank records, the apartments were purchased using the same bank account Stepanova used.
US$3 million arrived in the accounts on January 3, 2008 via Bristoll Export, a company which had been registered by GT Group in New Zealand. In February, companies incorporated in Cyprus, Moldova, and the United Kingdom sent US$9 million to the Credit Suisse accounts. See detailed information on one of the companies, NOMIREX, which processed US$8 million in its accounts while filing as “inactive” in a separate story.
In May and June 2008, the accounts held by Stepanov and Stepanova sent US$10 million to a shell company called Arivust holding. Records obtained by OCCRP show that through a series of agreements, Stepanov is named as the beneficial owner of the company.
The records also show that Stepanov is the beneficial owner of another company, Aikate Properties, which sent US$2 million to his Swiss account.
Hermitage acquired copies of the Credit Suisse transactions and used them to file a complaint with the bank and the Swiss federal attorney general this spring.
Stepanova remains employed by the Russian government. She resigned from the tax ministry but now works for a new defense agency established by Medvedev that oversees procurement and allocation of police and military equipment to the country’s law enforcement and military agencies.
So do Lieutenant Colonel Artyom Kuznetsov, whose assets were estimated at US$3 million although his official annual salary is about US$10,000; and Russian Interior Ministry Pavel Karpov, whose assets were estimated at US$1.5 million while his yearly pay was only US$10,000. Transparency International ranks Russia as the most corrupt large nation on earth, and the large country most likely to bribe abroad. They also estimate that bribery alone costs Russia US$300 billion annually, the total GDP of Denmark.  Bribery “is not even half of the problem,” according to a US House of Representatives Staffer who did not want to be identified because of his frequent work with Russian officials on policy issues including the Magnitsky case. Yep…more here.

Donald Trump Jr. had a meeting with 8 people in the room at Trump Tower in June of 2016. The meeting included Natalia Vesealnitskaya who was hired by and worked closely with Petr Katsyv who is/was the legal owner of Prevezon Holdings. The U.S. Justice Department for the Southern District of New York was prosecuting a money laundering case against Prevezon Holdings and it was settled too quickly directly after Jeff Sessions fired Phreet Bharara. Katsyv is also the vice president of Russian Railways, a state run rail operation run by Vladimir Yakunin and a close confidant of Vladimir Putin. Still confused and overwhelmed? Well there is more here.

Sorry there is yet another name, Sergei Roldugin. This particular Sergei is hardly a money launderer of the garden variety, in fact he is a cellist. But..he is at the center of a global scheme that moved $2.0 billion through Russian state banks, Swiss and Panamanian law firms all tied to Vladimir Putin via the investigation and release of the Panama Papers. Kinda wonder how a cellist is worth $100 million, right? Good question but money mess began at the Bank Rossiya, a top go-to bank for Putin and his inner circle. Oh yeah, Sergei Roldugin the the godfather to Putin’s oldest daughter, Maria.

In September of 2016, Roldugin announced before reporters at the Kremlin that Donadl Trump will be the next U.S. president.