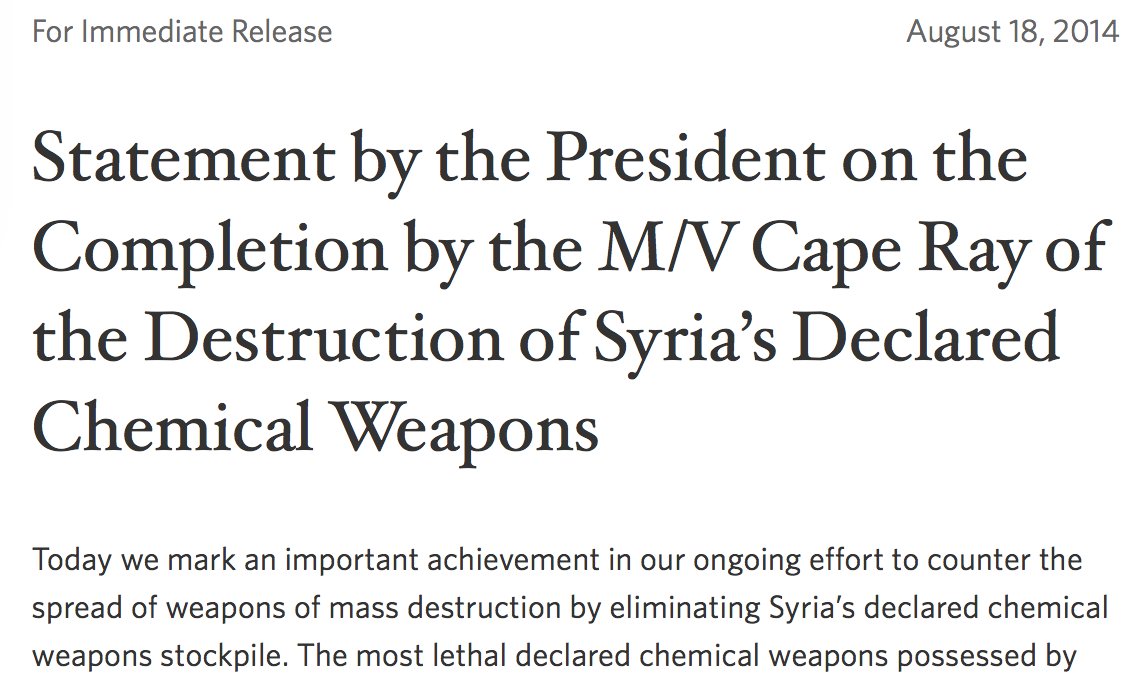 According to that CW disarmament specialist, ОБАС-250-235П is one and only Sov/Rus aviation bomb to spread Sarin. That looks like filler cappic.twitter.com/1sSpNdHt0m and Associated Press is reporting: 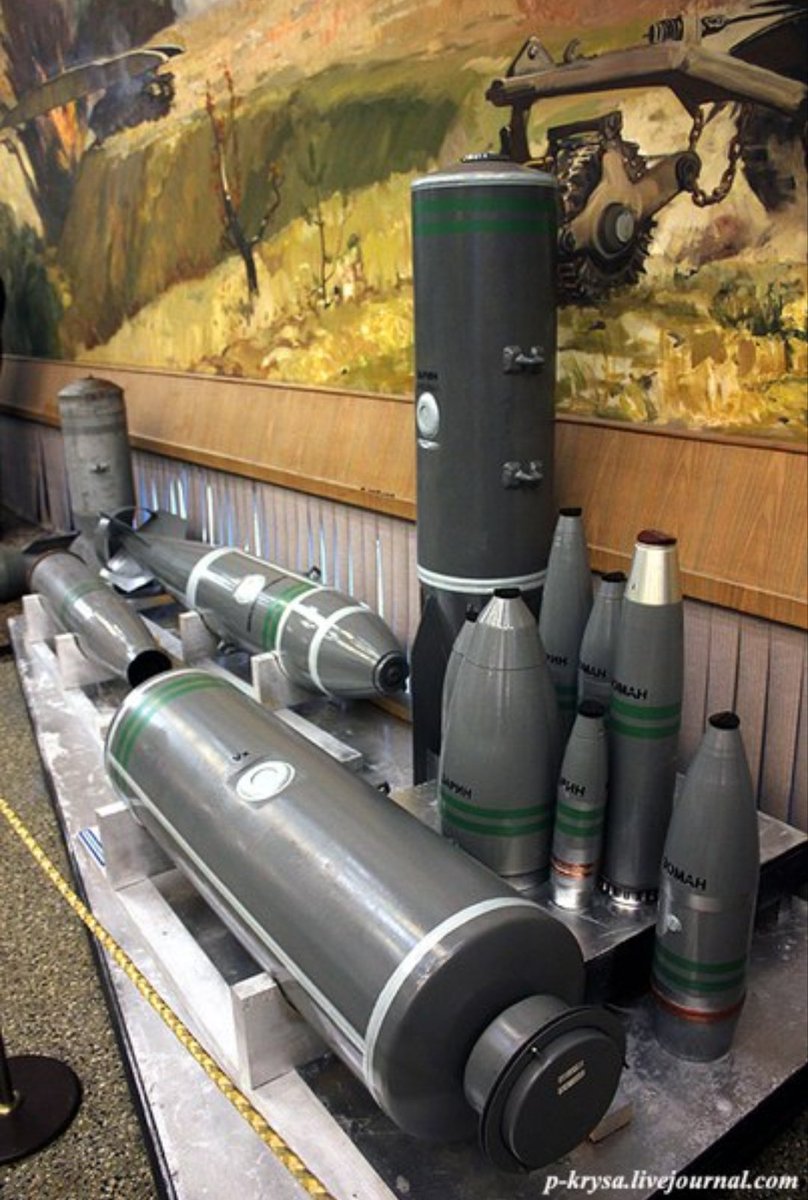 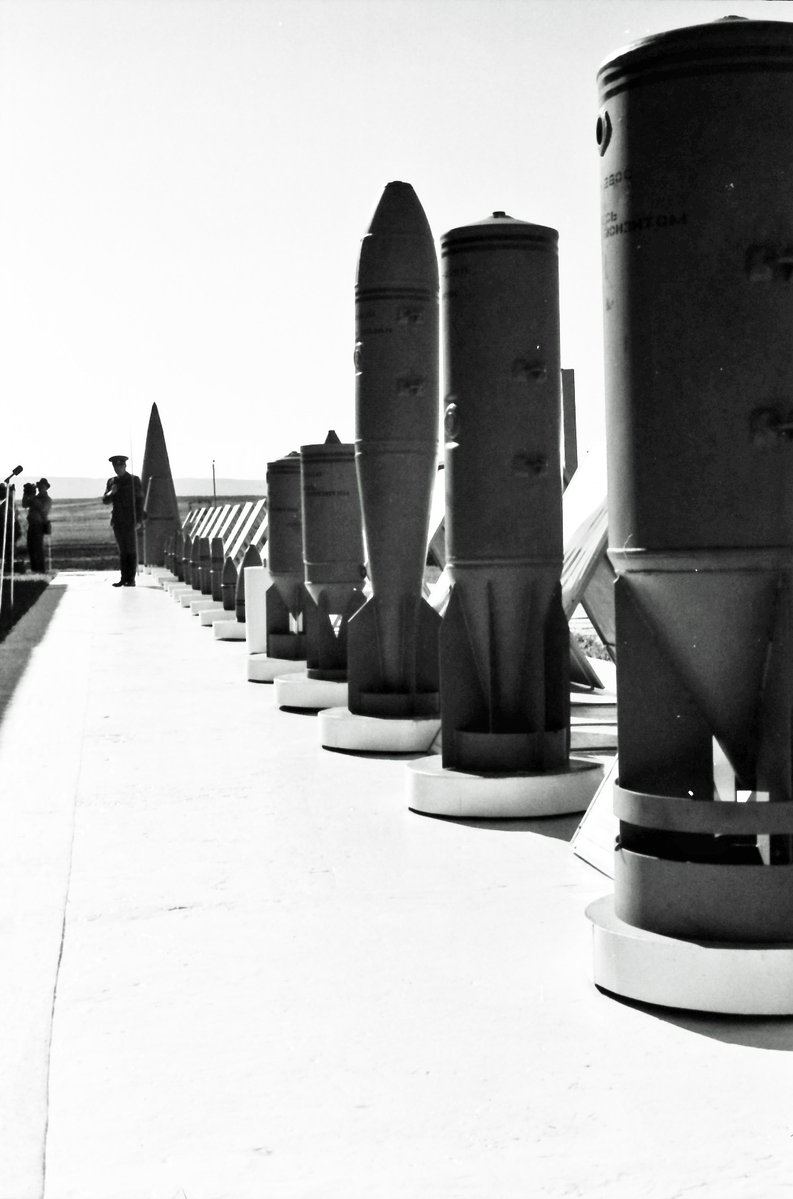 Who lied? Susan Rice? Yes, John Kerry? Yes, Barack Obama….especially yes. While John Kerry worked with Russia to eliminate the ‘declared’ chemical weapons in Syria…note below it refers to mustard gas. When Russia presented the document to the Obama administration, we signed it as well. So, the Assad regime, Putin, Iran and the Obama White House all have their feet in this swamp. Got that?

Also note the percentage of the CW inventory destroyed…hummm right?

Today the Department of Defense announced the deployment of M/V Cape Ray from Portsmouth, Va. M/V Cape Ray is the primary contribution of the Department of Defense toward international efforts to eliminate Syria’s chemical weapons material program. Over the last several months, hundreds of government and contract personnel have worked tirelessly to prepare the vessel to neutralize Syrian chemical materials and precursors using proven hydrolysis technology. This achievement could not have been possible without these remarkable contributions.

The United States remains committed to ensuring its neutralization of Syria’s chemical materials prioritizes the safety of people, protects the environment, follows verification procedures of the Organization for the Prohibition of Chemical Weapons (OPCW), and with applicable standards. All waste from the hydrolysis process on M/V Cape Ray will be safely and properly disposed of at commercial facilities to be determined by the OPCW. No hydrolysis byproducts will be released into the sea or air. M/V Cape Ray will comply with all applicable international laws, regulations, and treaties.

It is the responsibility of the Assad regime to transport the chemical materials safely to facilitate their removal for destruction. The international community is poised to meet the milestones set forth by the OPCW, including the June 30 target date for the total destruction of Syria’s chemical weapons materials. The United States joins the OPCW and the United Nations in calling on the Assad regime to intensify its efforts to ensure its international obligations and commitment are met so these materials may be removed from Syria as quickly and safely as possible. 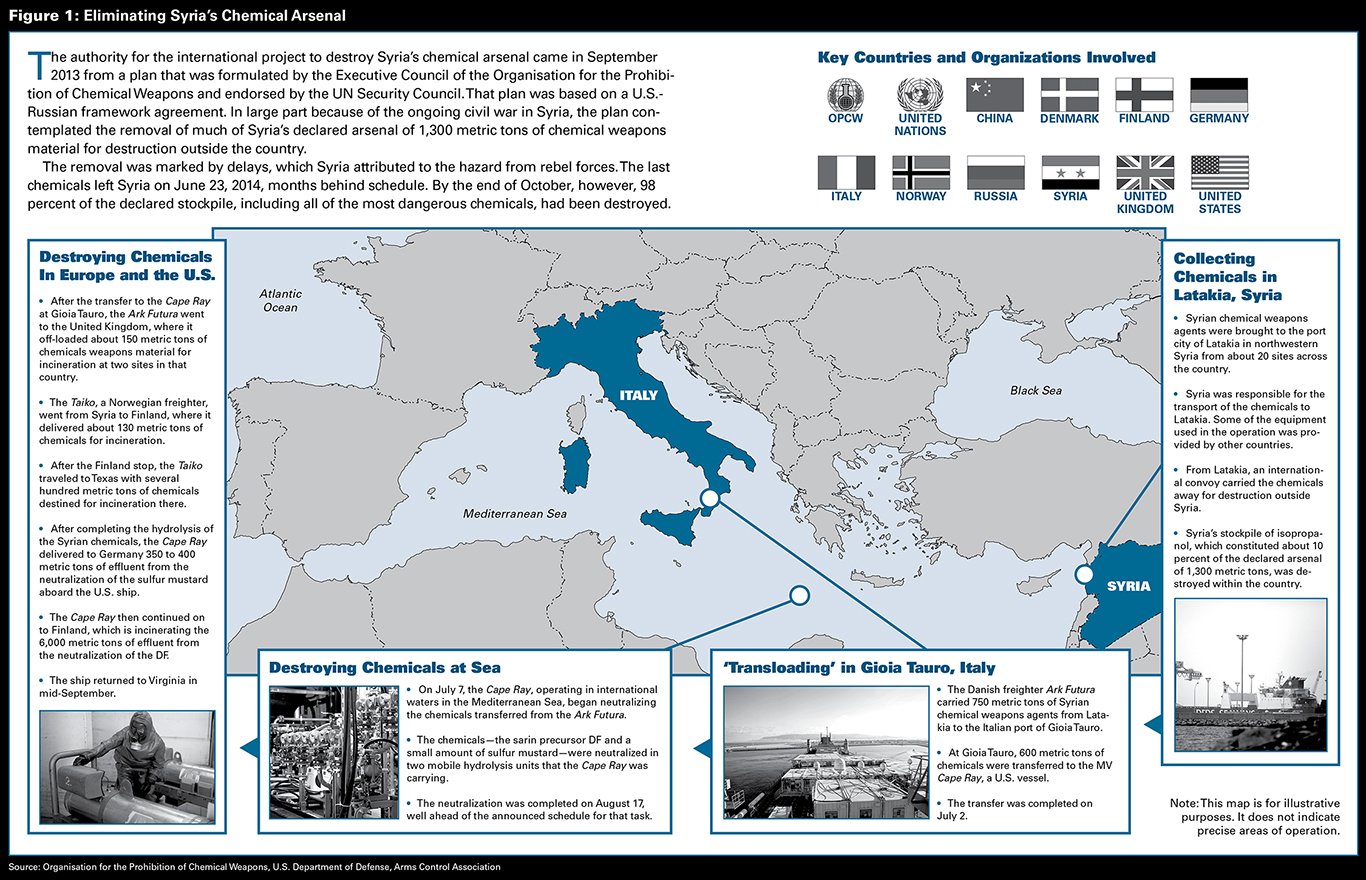 Transfer of Syrian Chemicals to Cape Ray is Complete

A trailer operator for Medcenter Container Terminal transfers a container from the M/V Ark Futura, a Danish cargo ship, along the dock to the loading deck of M/V Cape Ray during operations at the Italian port of Gioia Tauro, July 2, 2014. The Cape Ray is tasked with the neutralization of specific chemical materials from Syria in accordance with the Organization for the Prohibition of Chemical Weapons guidelines while operating in international waters. U.S. Navy photo by Seaman Desmond Parks

After the transfer was made in the Italian port of Gioia Tauro, Kirby said in the statement, the Cape Ray departed yesterday for international waters in the Mediterranean Sea to emp loy its onboard system to neutralize the chemicals.

The transfer of Syrian chemicals from the Danish container ship Ark Futura to the Motor Vessel Cape Ray is complete. Cape Ray departed the Italian port of Gioia Tauro this afternoon for international waters in the Mediterranean Sea, where neutralization operations will soon begin. The neutralization process should take several weeks to complete.

Secretary Hagel is grateful to Danish and Italian authorities for their support in this process and is enormously proud of everyone who helped make possible this safe and incident-free transfer. He extends a special thanks to the men and women of the Cape Ray, Naval Forces Europe, and U.S. European Command teams for their impeccable planning and execution.

“When Syria has completed removal of its chemical materials, MV Cape Ray will depart Rota and proceed to the transloading port in Italy, where she will take the chemicals on board,” Warren said in a statement announcing the vessel’s arrival in Spain. “Our ship is prepared and our crew is trained to safely neutralize Syria’s chemical materials. We stand ready to fulfill our contributions to this international effort; it is time for Syria to live up to their obligations to the international community.”

By offering Rota for a port of call before MV Cape Ray receives a load of chemical materials and embarks on the destruction phase of its mission, Spain is making a contribution to the United Nations-sanctioned multinational effort to rid Syria of its chemical weapons materials, officials at the U.S. Embassy in Madrid said.

The United States plans to neutralize the chemicals at sea in international waters using proven hydrolysis technology, embassy officials added. All waste from the hydrolysis process aboard MV Cape Ray will be safely and properly stored on board until it is disposed of at commercial facilities to be determined by the Organization for the Prohibition of Chemical Weapons, they added, emphasizing that no hydrolysis byproducts will be released into the sea or air.

Defense Secretary Chuck Hagel sent a message to the Cape Ray’s crew, wishing them well as they left Portsmouth.

“As you all know, your task will not be easy,” Hagel wrote. “Your days will be long and rigorous. But your hard work, preparation and dedication will make the difference.

“You are ready,” the secretary continued. “We all have complete confidence in each of you. You represent the best of our nation, not only because of your expertise and commitment, but because of your willingness to serve when called upon. For that, we will always be grateful. We are also grateful to your families for the love and support they have given you. On behalf of our country and the American people, I wish you much success. Take care of yourselves. God bless you all.”

WASHINGTON, Aug. 11, 2014 – Specialists on the U.S. container ship M/V Cape Ray continue their work in the Mediterranean Sea, neutralizing chemical materials from Syria and contributing to what the Organisation for the Prohibition of Chemical Weapons, or OPCW, on August 7 confirmed as the destruction of 74.2 percent of Syria’s chemical stockpile.

U.S. military and civilian specialists aboard the ship began using the field deployable hydrolysis system to neutralize Syrian chemical materials on July 7, Director of Pentagon Press Operations Army Col. Steve Warren told reporters at the time, anticipating that it would take about 60 days to complete the job.

“We had a gap in capabilities for a system that was transportable, that could be operated out of a remote location and that would [process] bulk liquid agent at high throughputs.”

The system had to be able to be transported to a remote site and set up and be sufficient with a supply of reagents and diesel fuel, Baker explained.

The project was given the go-ahead in February 2013. In November 2013, he said, “That’s when they made the decision to start putting it on the Cape Ray.”

The timeline was short, Baker said, and they couldn’t start from scratch with a new system, so they used a process from the former Aberdeen Chemical Demilitarization Facility, or ABCDF, that had been used a decade ago to neutralize 1,700 tons of mustard – part of the destruction of the United States’ own chemical stockpile.

Baker said the engineers compressed that process into transportable, standardized shipping containers. They had two titanium reactors they could use for the Cape Ray that made it easier for rapid deployment of the two systems that are now on the ship.

One of the Cape Ray’s most critical design factors for the system, Baker said, “was that everything we needed had to go on that ship. Instead of having trucks come in every day and bring the reagent and trucks go out every day with your waste, all of those containers had to go on the ship.”

At least 269 of the standardized shipping containers are on the ship, holding everything the specialists and crew need and everything the hydrolysis process needs and then creates. Nothing is dumped from the ship. More here.