It is no wonder they are hacking America to death…

Do we really know what is inside these machines?

Yandex, a Russian tech company working on self-driving systems, is partnering with GrubHub to deploy a fleet of delivery robots on selected college campuses in the United States later this year. 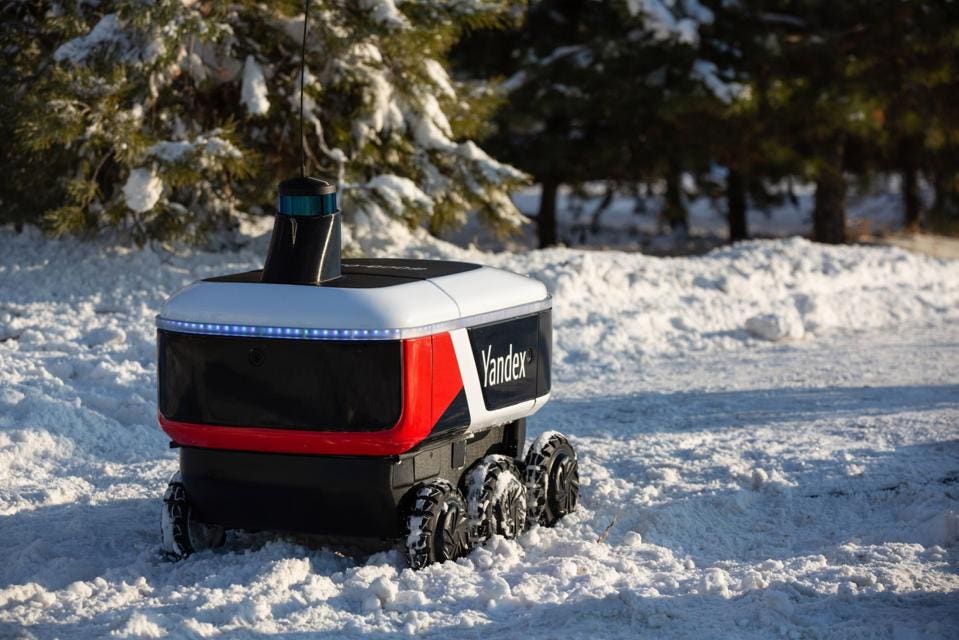 A Yandex.Rover autonomous delivery robot on a snow-covered path as it transports online food orders … [+]

“We chose to partner with GrubHub for campus delivery because of GrubHub’s unparalleled reach into college campuses across the United States, as well as the flexibility and strength of their ordering platform,” said Dmitry Polishchuk, CEO of Yandex Self-Driving Group. “We are delighted to deploy dozens of our rovers, taking the next step in actively commercializing our self-driving technology in different markets across the globe.’’

The partnership plans to launch the Rovers on 250 campuses.

“While college campuses are notoriously difficult for cars to navigate, specifically as it relates to food delivery, Yandex robots easily access parts of campuses that vehicles cannot,” Brian Madigan, GrubHub vice president of corporate and campus partners, said in a statement.

Yandex robot fleets have logged seven million autonomous miles since the team was founded in 2017, second only to Alphabet’s Waymo. That’s up from two million miles in February 2020.

A Hydrogen-Powered Boat Is Sailing The World. If Not In Cars, Do Boats Make Sense?

Yandex employs about 400 engineers, plus operational and support staff.

Artem Fokin, Yandex’s head of business development, told Forbes.com that the company has spent only $100 million dollars on development in the four years since inception. That’s relatively frugal compared to Silicon Valley teams, which have raised billions toward the same goal.

The company’s Rovers deliver take-out meals, groceries, and retail consumer goods. Yandex has increased the dimensions and carrying capacity of the Rovers over time, to accommodate larger loads.

“We’ve worked to make the cost of Rover delivery extremely economical,” spokesman Yulia Shveyko, told Forbes.com contributor David Silver in May. “In Russia, human delivery is very price-competitive, and we have to be even more affordable than that.”

Unlike public roads, where vehicles travel in lanes and their travel patterns are predictable, Yandex vehicles must navigate sidewalks and other pedestrian paths where people’s movements are less orderly.

They can operate in broad daylight and in the dark of night, in moderate snowfall and rain, as well as in controlled and uncontrolled pedestrian crossing scenarios. But they can only travel at speeds up to 5 miles per hour.

Yandex owns 73% of its Self-Driving Group, while Uber owns 19% and a group of Yandex employees own the remaining 8%.