The Global Magnitsky Act enables the United States to sanction the world’s worst human rights abusers and most corrupt oligarchs and foreign officials, freezing their U.S. assets and preventing them from traveling to the United States. Sanctioned individuals become financial pariahs and the international financial system wants nothing to do with them.

Before proceeding, ask yourself: is Global Magnitsky right for my case? The language of the Global Magnitsky Act as passed by Congress was ex-panded by Executive Order 13818, which is now the implementing authority for Global Magnitsky sanctions. EO 13818 stipulates that sanctions may be considered for individuals who are engaging or have engaged in “serious human rights abuse” against any person, or are engaging or have en-gaged in “corruption.” Individuals who, by virtue of their rank, have ordered others to engage or have facilitated these acts also are liable to be sanctioned.

Keep in mind that prior to the EO’s expansion of the language, human rights sanctions were limited to “gross violations of internationally recognized human rights” as codified in 22 USC § 2304(d)(1). The original language also stipulates that any victim must be working “to expose illegal activity car-ried out by government officials” or to “obtain, exercise, defend, or promote internationally recognized human rights and freedoms.” As for sanctions for corruption, it identifies “acts of significant corruption” as sanctionable offenses. This is generally thought to be a stricter standard than the EO’s term “corruption.” It may be worthwhile to aim for this higher standard to make the tightest case possible for sanctions.

As a rule, reach out to other NGOs and individuals working in the human rights and anti-corruption field, especially those who are advocating for their own Global Magnitsky sanctions. Doing so at the beginning of the process will enable you to build strong relationships, develop a robust network, and speak with a stronger voice.

***  And harass they did. Bill Browder is a distant buddy and I watched his communications this morning as he was arrested in Spain. The warrant: 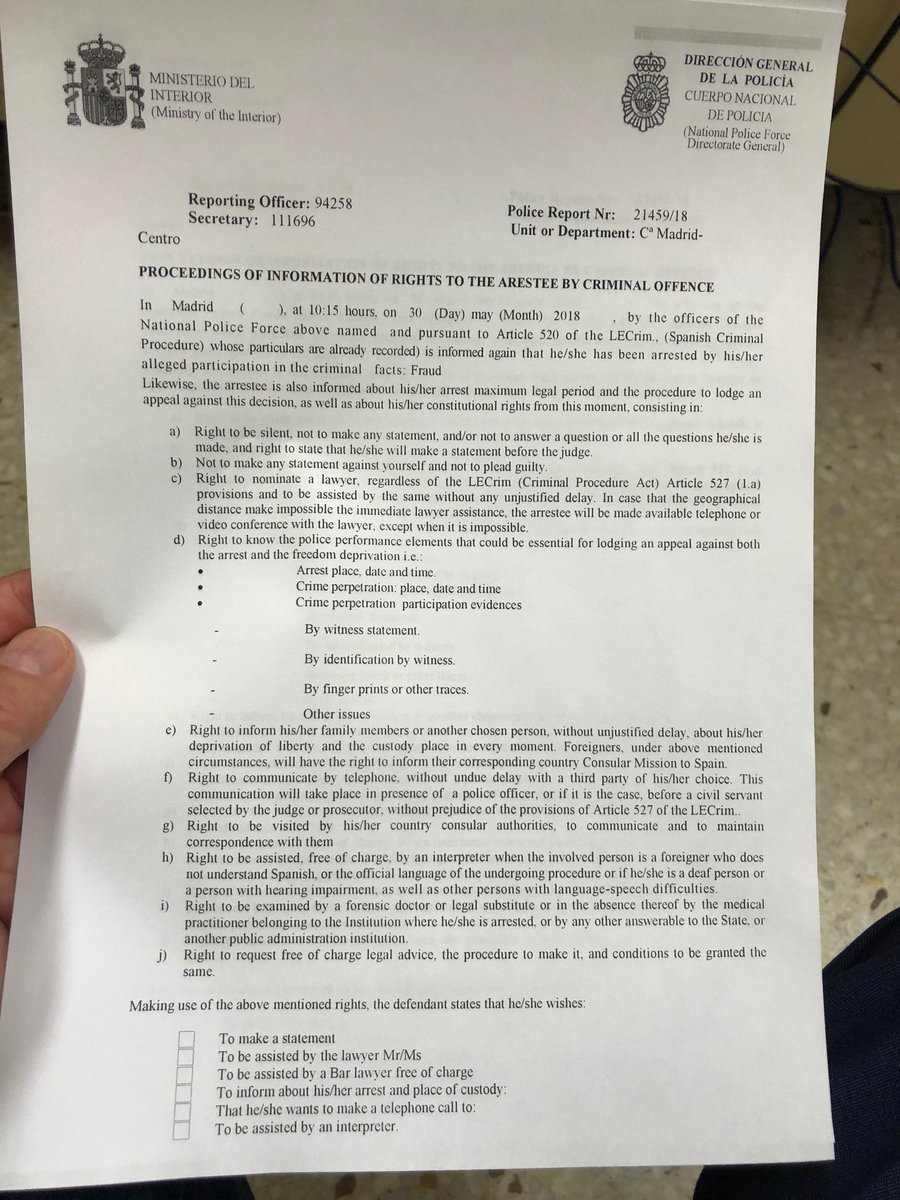 It was about 40 minutes later, he was released. He was in Madrid is to give evidence to senior Spanish anti Russian mafia prosecutor Jose Grinda about the huge amount of money from the Magnitsky case that flowed to Spain. Now that I’m released my mission carries on. Meeting with Prosector Grinda now. This was the SIXTH Russian arrest warrant using Interpol channels. It was NOT an expired warrant, but a live one. Interpol is incapable of stopping Russian abuse of their systems. He is right.

There is not, and never has been, a Red Notice for Bill Browder. Mr Browder is not wanted via INTERPOL channels. https://t.co/8zI3IepOMh

Interpol is a mess for sure. Which is it Interpol? Did you make a call to have Browder released? Un huh…

Then Browder responded: Russia has sent notices to have me arrested through Interpol systems at least THREE times in the last 10 months. It’s a matter of public record that Russia slipped these notices through Interpol controls without them noticing.

United States citizens are outraged about the Kremlin’s incursion into the U.S. electoral system, but that is unfortunately just the tip of the iceberg. Russia is also trying to hijack the U.S. judiciary for corrupt purposes, expropriation and political repression, which has received little attention.

Unlawful seizure of private assets and private companies by the Kremlin has been the norm since Vladimir Putin became president in 2000. Russia’s law enforcement agencies and courts are regularly used for the enrichment of the ruling elite.

The Sergei Magnitsky case is the best-known example of the Russian state’s co-opting of the courts to support its kleptocracy. A cabal of Russian tax and law enforcement officers conspired to defraud Russian taxpayers of $230 million, the largest tax fraud in Russian history, by targeting Bill Browder’s company, Hermitage Capital.

When Magnitsky, Browder’s tax attorney, discovered the fraud and notified authorities, Hermitage and Magnitsky were charged with their own fraud. Magnitsky was then arrested and died in pre-trial detention at the age of 37.

Since then, Russian authorities have repeatedly called on Interpol to disseminate red notices to harass Browder and other victims. Interpol, which is meant to facilitate cross-border coordination among law enforcement agencies, is susceptible to abuse as it passes on requests and notices from states without much scrutiny.

The Russian authorities used this law repeatedly against Yukos and its affiliates, after confiscating the oil giant from Mikhail Khodorkovsky and other shareholders.

More recently, agents of the Russian state have engaged in two federal court cases in New York: a 2016 attempt to loot the assets of Janna Bullock and her real estate investment firm RIGroup, and a 2018 effort to plunder the personal property of banker Sergei Leontiev, a former shareholder of Probusinessbank.

The Russian state is using the discovery process to extract information to further criminal charges and extortion schemes against individuals who fled to the U.S. seeking the protection, safety and rule of law now being undermined.

The Russian government and its associates have developed similar strategies to use federal and state courts to recognize and validate bogus decisions from Russian courts, exploit the U.S. Bankruptcy Code on behalf of sham creditors aligned with the Russian state and enforce illegitimate claims and orders issued by corrupt Russian judges.

Although U.S. judges are permitted to consider evidence questioning the legitimacy of a foreign judicial decision, they are rightly hesitant to speculate on whether another country upholds the rule of law.

Such a determination requires significant analysis beyond the scope and ability of most courts and therefore leaves the U.S. judiciary ill-equipped to defend itself against Russian incursion.

The U.S. is slowly beginning to fight back against Russian intrusion into our courts. In 2017, the United States sanctioned two Russian private-sector lawyers, Yulia Mayorova and Andrei Pavlov, who repeatedly represented Russian government agencies in the United States.

After passage by Congress of the “Global Magnitsky Human Rights Accountability Act,” the U.S. sanctioned Artem Chaika, the son of Russia’s prosecutor general, who used his father’s position to extort bribes and win contracts for himself and his cronies, while driving out competition.

More needs to be done to keep Russian lawlessness abroad at bay. The House and Senate judiciary committees should investigate the hacking of U.S. courts and hold hearings to examine the threat they pose, with an eye toward developing legislation that will help block future attacks.

The Department of Justice and the State Department should consider establishing a joint task force to coordinate with U.S. courts, where victims of abuse by corrupt governments could submit their evidence.

The State Department already produces annual reports that opine on the state of foreign judiciaries, which can be put to good use to protect the integrity of U.S. courts.