Hat tip to Ukraine officials, they have fully embraced Russian tactics and used them against the Kremlin’s normal hit job assignments on journalists.

Babchenko wrote a chilling book, titled One Soldier’s War in 2009. In 1995,  he was forced into the Russian military and sent to Chechnya. He has a history with the brutality of Putin.

Before ushering Babchenko into the room, Gritsak said investigators had identified a Ukrainian citizen who allegedly was paid $40,000 by the Russian security service to organize and carry out the hit. The unidentified Ukrainian man in turn allegedly hired an acquaintance to be the gunman, Gritsak said.

The man allegedly paid to organize Banchenko’s killing was detained Wednesday, he said, showing a video of the arrest.

Gritsak said killing Babchenko was part of a larger alleged plot by Russian security services. The Ukrainian man was also supposed to procure large quantities of weapons and explosives, including 300 AK-47 rifles and “hundreds of kilos of explosives,” to perpetrate acts of terror in Ukraine, he said.

Babchenko said he was not allowed to go into the details of the sting operation, but said Ukrainian law enforcement had been aware of a contract on his head for two months. He said he was approached by the Ukrainian Security Service, the SBU, a month ago.

KYIV — Ukrainian security officials said they faked the death of a dissident Russian journalist in an effort to catch people it says were involved in a Russian plot to kill him.

Vasyl Hrytsak, the head of Ukraine’s Security Service (SBU), shocked reporters at the SBU headquarters in Kyiv on May 30 when he announced that journalist and Kremlin critic Arkady Babchenko was still alive, a day after Ukrainian authorities announced he had been killed by a gunman outside of his Kyiv apartment.

Hrytsak also said a suspected organizer of an attempted murder plot against Babchenko, identified as a Ukrainian national, was detained as a result of a “special operation” by the SBU.

“We have prevented an attempted murder of Babchenko by carrying out a special operation,” Hrytsak said on May 30. “Thanks to this operation, we were able to foil a cynical plot and document how the Russian security service was planning for this crime.”

Babchenko made a dramatic appearance at the live May 30 television briefing after Hrytsak’s announcement, saying the fictitious reports of his death were part of an SBU operation that had been prepared for two months.

Babchenko reacts during the news conference in Kyiv on May 30.

“As far as I know, this operation was prepared for two months. A result of that was this special operation,” Babchenko told the briefing. “They saved my life. I want to say thanks. Larger terrorist attacks were prevented.”

Babchenko did not specify what those other planned attacks were. But Hrytsak said the SBU had received information about a plot to kill 30 people in Ukraine, including Babchenko. The security service declined to say who the other 29 people were.

Hrytsak said the detained Ukrainian citizen in the case — a former separatist fighter in eastern Ukraine — had been recruited by Russia to find someone to kill Babchenko. The SBU said the Ukrainian suspect was given $40,000 to organize the killing of Babchenko — $30,000 for the killer and $10,000 for being an intermediary.

“We managed not only to break this cynical provocation but also to document the preparation of this shameful crime by Russian special services,” he added.

Prosecutor-General Yuriy Lutsenko, who appeared alongside Babchenko at the May 30 press briefing, said it was necessary to fake the journalist’s death so that the organizers of the plot to kill him would believe they had succeeded.

Babchenko said he had no choice but to take part in the operation.

“I did my job. I’m still alive,” Babchenko said.

“I would like to apologize for what you have all had to go through,” said Babchenko, who broke into tears at times. “I’m sorry, but there was no other way of doing it. Separately, I want to apologize to my wife for the hell that she has been through.”

Ukrainian President Petro Poroshenko said his government would provide round-the-clock protection to Babchenko and his family and called the security services’ effort a “brilliant operation.”

“Ukrainian law enforcement agencies are becoming stronger every day in countering Russian aggression,” Poroshenko said on Twitter. “It is unlikely that Moscow will calm down — I’ve given an order to provide Arkady and his family with protection.”

Translated from Ukrainian by Microsoft

Congratulations @servicessu with a brilliant operation on preserving the life of the Russian journalism Arcadia Babenku. Ukrainian law enforcement agencies are becoming stronger in counteraction to the Russian aggression. Hardly Moscow will calm down-commissioned to give the arcade and his Family Protection 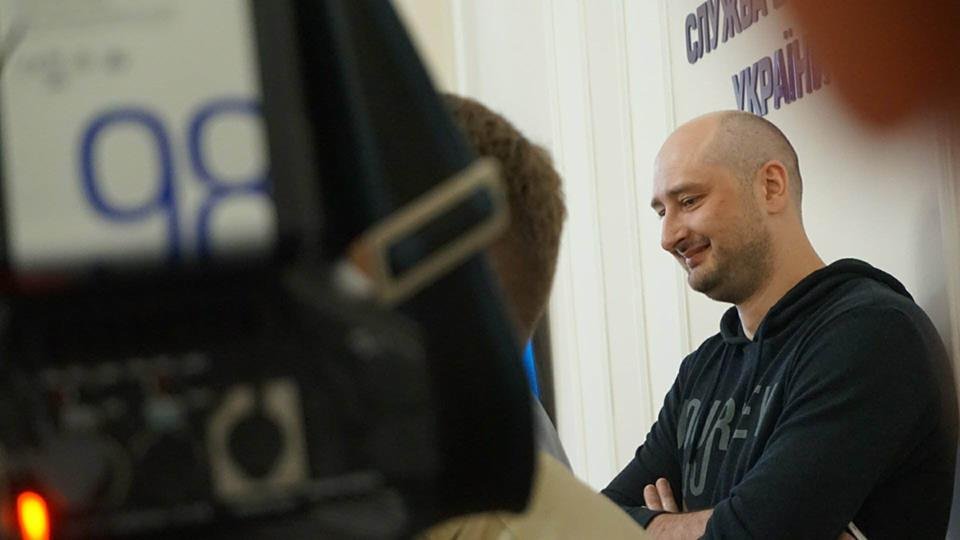 Meanwhile, the Reporters Without Borders media watchdog criticized Ukrainian authorities for staging Babchenko’s death, saying it “would not help the cause of press freedom.”

“It is pathetic and regrettable that the Ukrainian police have played with the truth, whatever their motive…for the stunt,” Christophe Deloire, the head of the group, said.

“All it takes is one case like this to cast doubt on all the other political assassinations,” he said, referring to the deaths and attempted assassinations of several Kremlin critics outside of Russia in recent years.

Russian Foreign Ministry spokeswoman Maria Zakharova said after Babchenko’s reappearance on May 30 that officials in Moscow were glad Babchenko was still alive.

But Zakharova said Ukrainian officials had circulated a false story as “propaganda.”

“First, I’d like to apologize for everything you’ve had to go through. I’ve been at the funeral of many friends and colleagues, and I know this nauseous feeling. Sorry for imposing this upon you, but there was no other way.

“Special apologies to my wife for the hell she’s been through these two days. Olya, excuse me, please, but there was no other option.

“I’d also like to thank the Ukrainian Security Service (SBU) for saving my life. … This operation has been prepared for two months. I was told about this a month ago. …

“A week or two ago, Russia announced that [Islamic State] were preparing terrorist attacks before the Champions League [final in Kyiv]. I think it was going to be my [assassination]. …

“What else to say? As I said, two months ago I was approached and told that my assassination has been commissioned and money allocated. Forty-thousand dollars. It turns out I’m quite valuable!”

Kremlin spokesman Dmitry Peskov said that he had only seen media reports so far and otherwise had “no information on the matter.”

He said he did not know “who is doing the accusing and what the accusations are…I cannot say anything,” Peskov said.

Kyiv police and officials from Ukraine’s Interior Ministry had announced on May 29 that Babchenko had died in an ambulance on the way to a hospital after being shot in the back at his Kyiv apartment, where he has lived in exile since August 2017.

Reports of the 41-year-old’s supposed death had stunned colleagues and added to tension between Moscow and Kyiv, whose ties have been badly damaged by Russia’s seizure of Crimea and backing for separatist militants in a devastating war in eastern Ukraine.

In a post to Facebook just hours after news of Babchenko’s death emerged, Prime Minister Volodymyr Hroysman said, “I am convinced that the Russian totalitarian machine could not forgive his honesty and principled position.”

Before Babchenko’s dramatic reappearance on May 30, Peskov said allegations of a Russian assassination plan were part of an anti-Russia smear campaign.

Aleksandr Bortnikov, the head of Russia’s Federal Security Service (FSB), said Ukrainian allegations of an FSB plot were nonsense and a provocation.

Babchenko is well-known for his criticism of the Kremlin.

His reporting about Moscow’s support for pro-Russia separatist fighters in eastern Ukraine brought him severe criticism by Russian state media and from Russian officials.

Babchenko told RFE/RL in December 2016 that “all of the elements” of Russia’s state “propaganda machine” were engaged against him after he posted comments to Facebook about the crash of a Russian military plane in the Black Sea.

All 92 people on board were killed, including members of the Russian Army’s renowned choir, the Aleksandrov Ensemble, who were traveling to give a performance for Russian troops in Syria.

Babchenko said the reaction by state officials and state media to his remarks was intended to send a signal to Russian society that “we must be in one line; we must express sadness; we must appear sad — and anyone who doesn’t must be destroyed.”

Babchenko told RFE/RL in late 2016 that State Duma Deputy Vitaly Milonov, Federation Council member Frants Klintsevich, and Russian media like Channel One and Life News were “stitching together some fake news” about him.

Babchenko said: “A major effort is being organized. They aren’t investigating why the plane crashed but instead are persecuting me.”

In February 2017, writing for Britain’s The Guardian newspaper, Babchenko said: “I can tell you what political harassment feels like in [President Vladimir] Putin’s Russia. Like many dissidents I am used to abuse, but a recent campaign against me was so personal, so scary, that I was forced to flee.”

Babchenko served in the Russian Army during the first separatist war in Chechnya in the 1990s before he became a journalist.

He worked as a military correspondent and wrote for several Russian media organizations, including the Moskovsky Komsomolets daily newspaper and Novaya Gazeta, as well as TV Tsentr, and Channel One TV.

He had been scathingly critical of the Kremlin in recent years. He moved to Kyiv in the autumn of 2017, where he worked as a host for the Crimean Tatar TV station, ATR.