As part of the Los Angeles City Charter:

Every officer provided for in the Charter shall, before entering upon the discharge of the duties of office, take the following oath or affirmation: “I do solemnly swear (or affirm, as the case may be) that I will support the Constitution of the United States and the Constitution of the State of California and the Charter of the City of Los Angeles, and that I will faithfully discharge the duties of the office of (here inserting the name of the office) according to the best of my ability.” 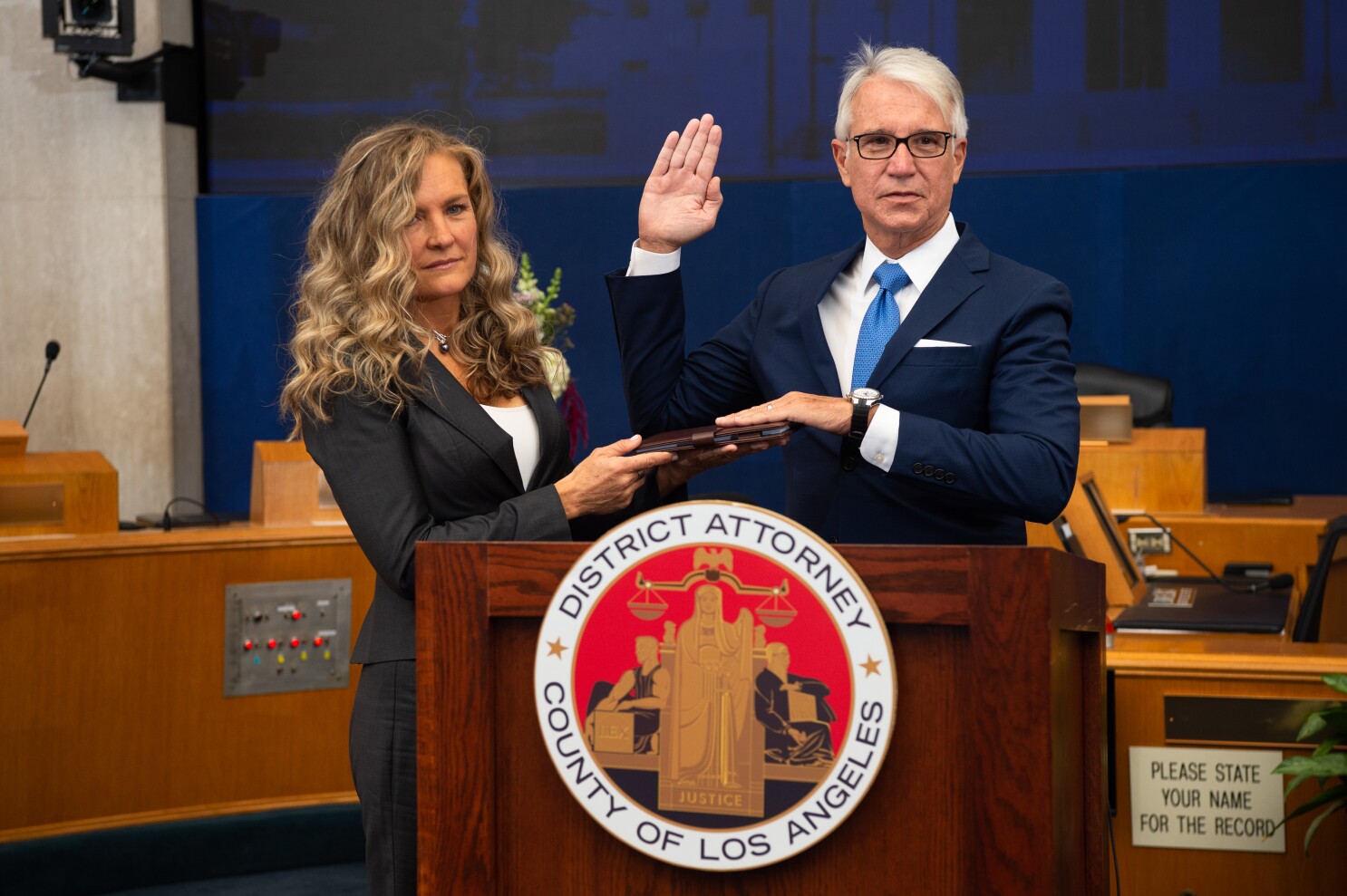 LOS ANGELES (CN) — On his first day on the job as Los Angeles County’s top prosecutor, George Gascón says the district attorney’s office will no longer ask for cash bail for nonviolent felony charges, seek the death penalty or charge children as adults.

He was sworn in Monday and promised to “change course and implement a system of justice that will enhance our safety and humanity” as he takes the helm of one of the nation’s largest prosecutor’s offices.

“Today we are confronting the lie that stripping entire communities of their liberties somehow made us safer — and we’re doing it with science, research, and data,” Gascón said in a statement. “For decades those who profit off incarceration have used their enormous political influence — cloaked in the false veil of safety — to scare the public and our elected officials into backing racist policies that created more victims, destroyed budgets and shattered our moral compass. That lie and the harm it caused ends now.”

“The new DA talks a good game, but his plans will do nothing but further victimize” LA County residents including people of color, the police union said in a statement.

The police union did not immediately respond to news that the DA’s office will form a board to review deadly police shootings going back to 2012, which is when Lacey first took office. The University of California, Irvine, criminal justice clinic said it assist the board.

He was appointed as San Francisco DA by then-Mayor Gavin Newsom to fill the vacancy left by Kamala Harris when she was elected as California attorney general.

Gascón’s pull toward LA County was in part encouraged by local activists who sought a candidate to challenge Lacey, including the Black Lives Matter-LA chapter.

The DA race played out amidst a backdrop of demands across the country for criminal justice reform over the murder of unarmed Black people.

For the last three years, local activists rallied outside Lacey’s downtown offices to demand an audience with her to discuss the killing of unarmed Black and brown civilians by police. Families whose loved ones were killed by police also wanted to know why the DA’s office was unwilling to bring charges against police over the shootings of unarmed people.

Under Lacey’s command, the DA office only brought charges against one police officer in the shooting death of a driver who fled during a traffic stop.

In a letter addressed to LA County police officers, Gascón said during his career as a police officer and then DA he’s “become a fierce advocate for good policing for largely the same reasons I seek to hold bad police accountable. It’s not simply because I believe Black Lives Matter, or because of the oath I will take today to uphold the Constitution and ensure equal justice under the law.”

“We are all scarred by their misdeeds, leading many in our communities to perceive police as persecutors instead of protectors,” said Gascón.

In a tweet Gascón wrote, “40 years ago I walked my first beat as a young police officer. Today, I was sworn in as the 43rd District Attorney of Los Angeles.”

His campaign and win is widely viewed as an indictment of Lacey’s role as a prosecutor who did not change fast enough for a county of 10 million that sought a more progressive approach to criminal justice.

Lacey, the first Black prosecutor and first woman to hold the office, conceded the race to Gascón last month. He won roughly 2 million votes to Lacey’s 1.7 million, according to the county’s election results.

Along with doing away cash bail, Gascón said his office would ensure a better response to reach out to victims of sexual assault, will stop charging low-level offenses connected to poverty, addiction, mental illness and homelessness, according to a statement from his transition team.

His office will also emphasize resentencing for people convicted of nonviolent crimes and are deemed low risk or those with records of rehabilitation.

In October, Gascon’s campaign released a detailed plan that would use the power of the Los Angeles District Attorney’s Office to help criminal illegal aliens avoid arrest and deportation by the Immigration and Customs Enforcement (ICE) agency.

As part of the plan, Gascon has proposed factoring in “severe collateral consequences in charging decisions, plea negotiations, and use of diversion programs” for criminal illegal aliens so as to avoid arrest and deportation by ICE.

“Local criminal justice actors must be careful not to become part of a pipeline to deportation in a dysfunctional immigration system … the DA must also strive to limit unnecessary exposure to immigration enforcement,” Gascon’s plan continues:

Immigration status can have a disproportionate adverse impact on noncitizen defendants because of federal immigration law implications. A core duty of prosecutors is to ensure that the punishment fits the crime. As such, it is incumbent upon the prosecutor to be aware of and mitigate collateral consequences, particularly when they are more severe than the punishment for the crime itself. Indeed, in Padilla v. Kentucky 130 S.Ct. 1473 (2010), the U.S. Supreme Court ruled that immigration consequences of a conviction for immigrants can be profound and warrant consideration by the prosecution as well as the defense. [Emphasis added]

An immigration-informed approach includes working with defense attorneys to obtain a defendant’s immigration status–without requiring onerous proof or documentation – and implementing training programs to increase awareness of immigration law, with the goal of equipping prosecutors to exercise discretion in achieving immigration-neutral charges and plea bargaining. The basic principle guiding this approach is that the full range of punitive consequences – both direct and collateral–should be roughly equivalent for citizen and noncitizen offenders. [Emphasis added]

Likewise, Gascon has proposed reducing “prosecution of low-level, ‘quality of life’ offenses” such as drug possession, driving without a license, and public urination, so that illegal aliens who are arrested for these crimes do not face what Gascon deems “outsized immigration ramifications, due to the booking and fingerprint sharing between local law enforcement and immigration authorities following an arrest.”

Even further, Gascon plans to “limit exposure to immigration enforcement” for criminal illegal aliens by reducing jail-time so that suspects are booked and almost immediately released. More here from Breitbart.