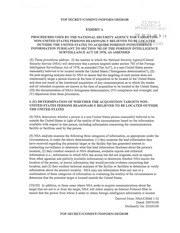 President Trump signed an order that reverses the classified rules and cyber processes from the Obama administration, known as IVE PPD 20. It was signed in October 2012, and this directive supersedes National Security Presidential Directive NSPD-38. Integrating cyber tools with those of national security, the directive complements NSPD-54/Homeland Security Presidential Directive HSPD-23.

After the U.S. Senate failed to pass the Cybersecurity Act of 2012 that August,[12] Presidential Policy Directive 20 (PPD-20) was signed in secret. The Electronic Privacy Information Center (EPIC) filed a Freedom of Information Request to see it, but the NSA would not comply.[13] Some details were reported in November 2012.[14] The Washington Post wrote that PPD-20, “is the most extensive White House effort to date to wrestle with what constitutes an ‘offensive’ and a ‘defensive’ action in the rapidly evolving world of cyberwar and cyberterrorism.”[14] The following January,[15] the Obama administration released a ten-point factsheet.[16]

On June 7, 2013, PPD-20 became public.[15] Released by Edward Snowden and posted by The Guardian,[15] it is part of the 2013 Mass Surveillance Disclosures. While the U.S. factsheet claims PPD-20 acts within the law and is, “consistent with the values that we promote domestically and internationally as we have previously articulated in the International Strategy for Cyberspace”,[16] it doesn’t reveal cyber operations in the directive.[15]

President Trump has taken this action to aid not only the military, but it would work to deter foreign actors, impede election influence and apply new penalties for violations. There have been high worries by officials due to electric utilities and the brute cyber attacks.

Some lawmakers have raised questions in recent months about whether U.S. Cyber Command, the chief agency responsible for conducting offensive cyber missions, has been limited in its ability to respond to alleged Russian efforts to interfere in U.S. elections due to layers of bureaucratic hurdles.

The policy applies to the Defense Department as well as other federal agencies, the administration official said, while declining to specify which specific agencies would be affected. John Bolton, Mr. Trump’s national security adviser, began an effort to remove the Obama directive when he arrived at the White House in April, the official said.

As designed, the Obama policy required U.S. agencies to gain approval for offensive operations from an array of stakeholders across the federal government, in part to avoid interfering with existing operations such as digital espionage.

Critics for years have seen Presidential Policy Directive 20 as a particular source of inertia, arguing that it handicaps or prevents important operations by involving too many federal agencies in potential attack plans. But some current and former U.S. officials have expressed concern that removing or replacing the order could sow further uncertainty about what offensive cyber operations are allowed.

One former senior U.S. official who worked on cybersecurity issues said there were also concerns that Mr. Trump’s decision will grant the military new authority “which may allow them to have a domestic mission.”

The Obama directive, which replaced an earlier framework adopted during the George W. Bush administration, was “designed to ensure that all the appropriate equities got considered when you thought about doing an offensive cyber operation,” said Michael Daniel, who served as the White House cybersecurity coordinator during the Obama administration. “The idea that this is a simple problem is a naive one.”  More here from the WSJ.