Primer: Callista Gingrich is the U.S. Ambassador to the Vatican. Given the crisis at our Southern border and the relationship Newt has with the Trump White House, imagine the conversations regarding the Pope’s constant call for no walls and global Catholic charities working against U.S. law enforcement. Yikes… and….it seems the Catholic Church in the United States has no use for Callista, Newt or President Trump. If you need some proof on that, click here.

The other part of the Primer:

President Obama’s Executive Action: In November, the Jesuits of the United States, Jesuit Refugee Services/USA, and the Kino Border Initiative issued a statement welcoming President Obama’s executive action to end the legislative gridlock and place pressure on Congress to make immigration reform a priority. The President’s order will provide temporary stays of deportation to as many as five million undocumented migrants who live in fear of discovery and separation from their families, but there are another 6 million undocumented immigrants whose situations are unaddressed by the order. To read the complete statement from the Jesuits of the United States, JRS/USA, and the KBI, please see: http://www.jesuit.org/news-detail?TN=NEWS-20141121032132. 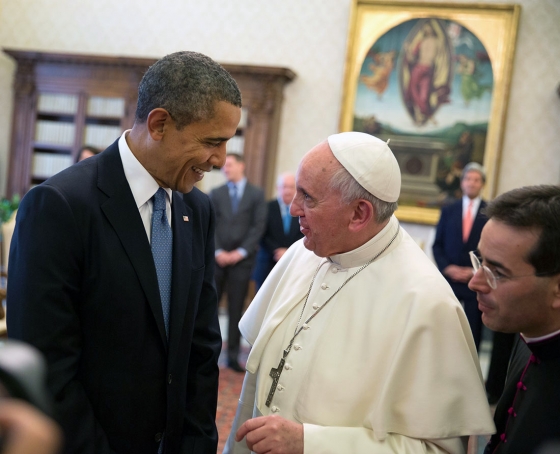 details of this photo

A collaboration between Campus Ministry and the Alternative Breaks Program of the Center for Social Justice Research, Teaching, and Service at Georgetown University, MAGIS: Kino Border Immersion is a weeklong trip during which participants will focus on building relationships of solidarity with the poor, growing in awareness of social justice issues, appreciating the convergence of learning, faith, and justice, and developing skills of reflection on one’s experience at the US/Mexico border.

Magis: Kino Border Immersion (KBI) strives to build participants’ understanding of immigration and the surrounding issues. Through interactions with a wide range of stakeholders in the Arizona border region, participants will learn about the structures that shape migration and gain a firsthand look at different sides and stages of the issue. By engaging in dialogue with migrants, faith leaders, workers, service providers, and law enforcement, we will attempt to humanize the issue and escape limiting stereotypes and misconceptions. The Jesuit values of interreligious understanding, faith and justice, community in diversity, and contemplation in action will guide our efforts to understand the motivations for migration, the experience of migration, and the challenges faced by migrants in the United States. Ultimately, KBI aims to facilitate a sustained commitment to education, activism, and solidarity with the migrant justice movement in our communities on the Hilltop, in DC, and around the country.

During our stay in and around Tucson, we will:

*Meet and live with families from San Miguel Cristo Rey High School, which serves many immigrant families in the economically depressed south side of Tucson
*Join the members of the Jesuit-run Kino Border Initiative as they serve migrants on the border
*Engage with various groups working with Migrants and Border related issues, including the Sierra Club
*Meet members of the border patrol and local law enforcement
*Visit with churches and faith-based communities committed to serving undocumented migrants at the border

Created in 2008, the Kino mission is to ‘break down barriers, provide direct assistance to migrants and dictate conditions for refugees with an annual budget of $700,000 per year but that does not include all chapters, other Catholic organizations or money from the Vatican.

And now for the Kino Border Initiative:

Based on both sides of the border in Nogales, Arizona and Nogales, Sonora, Mexico, KBI accompanies migrants to travel north to reach the United States. There was recently a dinner where a migrant named Sevilla shared his success story from Honduras to the United States merely escaping gang violence.

Sevilla first greeted the audience in broken English then recounted his journey in Spanish allowing a translator to fill in the gaps for those who needed it. He expressed gratitude for being able to leave Honduras and that God helped him on the journey through Mexico where he underwent “many nights without sleeping, many days without eating, but thanks to God everything turned out OK,” he said. He did encounter some volunteers who gave him food along the way, however.

Another hardship: a ride on the famous “Beast” train through Mexico due to the presence of the cartels in that country and having no other choice of transportation. Riding on this network of trains has proved to be very dangerous to migrants. When he arrived in Nogales, Sevilla said he was very dirty and “really tired,” breaking into English which evoked laughter from the audience and might also have released some tension.

“But I here, now,” said Sevilla, with the audience breaking into applause.

When in Nogales, Sevilla heard from a friend of the KBI dining room, called the “Comedor” and he went there very tired and hungry. “But they gave me hope, which was very important for me,” said Sevilla through the translator.

KBI assisted Sevilla in his process of seeking asylum in the United States with legal help, a bond payment and a sponsor family. He stated the KBI is not just a group in Mexico but “it’s all of you,” referring to the attendees. “Thank you for saving life,” said Sevilla in broken English and then in Spanish.

Lisa and David Grant were his “life savers.” They sponsored Sevilla, then 24, during his asylum process into the United States.

“He has been such a blessing to our lives. He’s really taught us a lot about, honestly our faith,” Lisa said.

She pointed out an example that when Sevilla won his asylum case to legally stay in the U.S., she said the he was so lucky. Sevilla dismissed the notion of luck, instead pointing upward.

Also during the evening, four members of the Missionary Sisters of the Eucharist were presented with the Pope Francis award from the organization, for their dedicated service to the people served by the initiative.

“I see what they’re carrying, I see what’s inside them. I see the fear that they’re experiencing as they flee,” reflected KBI’s executive director Jesuit Father Sean Carroll during the dinner. “I see the hunger and the thirst that they’ve experienced along the way. I see their uncertainty about what’s next about the asylum process, about whether they can find safety and support.

Fr. Fred Adamson, vicar general of the diocese, spoke of the human effort just to meet basic needs such as food, clothing and shelter.

“At the heart of it, the Kino Border Initiative is to be the face of Christ, to really be the compassion, the care, the love in a real way at the border,” said Fr. Adamson. More here.