Parents give up legal custody…what? Well, perhaps there is a silver lining in this…no more student loan debt….

Hat tip to ProPublica for great work and continued investigations.

Parents are giving up legal guardianship of their children during their junior or senior year in high school to someone else — a friend, aunt, cousin or grandparent. The guardianship status then allows the students to declare themselves financially independent of their families so they can qualify for federal, state and university aid, a ProPublica Illinois investigation found.

“It’s a scam,” said Andy Borst, director of undergraduate admissions at the University of Illinois at Urbana-Champaign. “Wealthy families are manipulating the financial aid process to be eligible for financial aid they would not be otherwise eligible for. They are taking away opportunities from families that really need it.”

While ProPublica Illinois uncovered this practice in north suburban Lake County, where almost four dozen such guardianships were filed in the past 18 months, similar petitions have been filed in at least five other counties and the practice may be happening throughout the country. ProPublica Illinois is still investigating.

Borst said he first became suspicious when a high school counselor from an affluent Chicago suburb called him about a year ago to ask why a particular student had been invited to an orientation program for low-income students. Borst checked the student’s financial aid application and saw she had obtained a legal guardian, making her eligible to qualify for financial aid independently.

The University of Illinois has since identified 14 applicants who did the same: three who just completed their freshman year and 11 who plan to enroll this fall, Borst said.

ProPublica Illinois found more than 40 guardianship cases fitting this profile filed between January 2018 and June 2019 in the Chicago suburbs of Lake County alone. 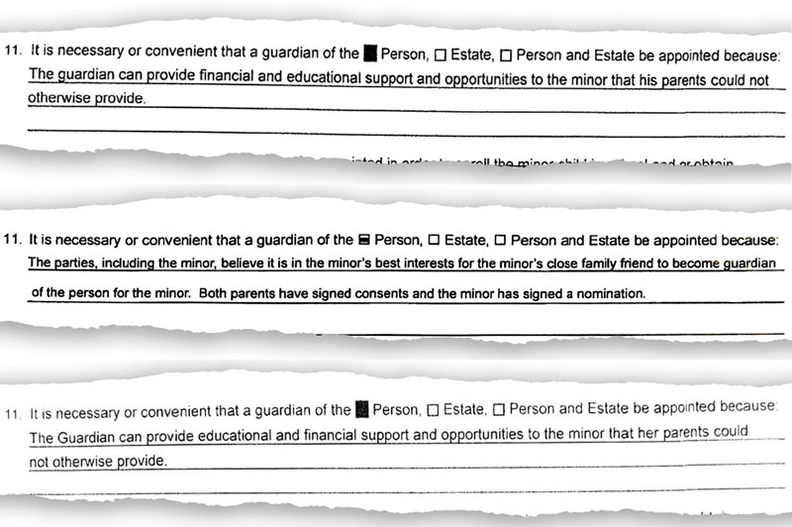 The process starts in the courthouse.

Georgieva runs a Lincolnshire-based college consulting company, Destination College, which offers “strategies to lower tuition expenses.” The company’s logo is a graduation cap with dollar bills spilling out of it. In video testimonials, clients praise the company for saving them money.

She is tied to at least several of the families, as well as to Rogers, the attorney, who is also featured in the video.

The description for the company’s “premier” services includes a “College Financial Plan, Using Income and Asset Shifting Strategies to Increase Your Financial and Merit Aid and Lower Out of Pocket Tuition Expenses.”

*** Is this happening in other states? We will soon know, questions are now being asked in Missouri.