Last December, President Biden authorized additional JFK assassination records to be declassified and released. The documents were so banal, there was virtually no additional chatter or reporting on it.

In case you missed it, click here for those additional documents. There may be some new names in the released documents and we should be asking what other countries have contributed to the whole affair such as Mexico….

Under the law, as of October 1997, ALL the JFK files in the National Archives were to be released and Biden issued an extension to the release date.

Sec. 2.  Background.  The Act permits the continued postponement of disclosure of information in records concerning President Kennedy’s assassination only when postponement remains necessary to protect against an identifiable harm to the military defense, intelligence operations, law enforcement, or the conduct of foreign relations that is of such gravity that it outweighs the public interest in disclosure.  Since 2018, executive departments and agencies (agencies) have been reviewing under this statutory standard each redaction they have proposed that would result in the continued postponement of full public disclosure.  This year, the National Archives and Records Administration (NARA) has been reviewing whether it agrees that each redaction continues to meet the statutory standard.  The Archivist of the United States (Archivist), however, has reported that “unfortunately, the pandemic has had a significant impact on the agencies” and NARA and that NARA “require[s] additional time to engage with the agencies and to conduct research within the larger collection to maximize the amount of information released.”  The Archivist has also noted that “making these decisions is a matter that requires a professional, scholarly, and orderly process; not decisions or releases made in haste.”  The Archivist therefore recommends that the President “temporarily certify the continued withholding of all of the information certified in 2018” and “direct two public releases of the information that has” ultimately “been determined to be appropriate for release to the public,” with one interim release later this year and one more comprehensive release in late 2022. 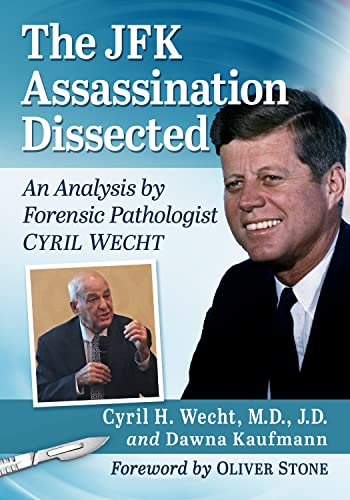 Wecht’s latest book, “The JFK Assassination Dissected” (Exposit Books), summarizes his six decades of research into the subject, and pokes holes in the conclusion made by the seven-man Warren Commission that Oswald, without any help, shot and killed Kennedy when his motorcade drove past the Texas School Book Depository in Dallas on Nov. 22, 1963.

“Young people are still being taught that the 35th president was murdered by a lone gunman, and that is simply bulls–t,” Wecht boomed during an interview at his modest office in downtown Pittsburgh last month.

Oswald “had almost certainly been a CIA agent of some kind,” says Wecht, but the directive to kill may have come from higher up. Allen Dulles, director of the CIA from 1953 to 1961, had overseen the disastrous Bay of Pigs invasion to oust Cuban dictator Fidel Castro and had reason to be disgruntled. Dulles also ended up in prime position to participate in a coverup, Wecht conjectured.

“Kennedy had fired Allen Dulles because he was really pissed off about what the CIA was doing,” said Wecht. “Then who gets appointed to the Warren Commission? Dulles. It stinks to high heaven.”

I’ve been working on the book for six years.”

The former coroner of Allegheny County, Pa., Wecht is both a trained lawyer and doctor who has conducted more than 17,000 autopsies and also provided expert testimony on high-profile cases including the deaths of Robert F. Kennedy, Martin Luther King Jr., Elvis Presley, JonBenet Ramsey and Laci Peterson.

The first non-governmental forensic pathologist to gain access to the National Archives to examine the assassination materials in 1972, Wecht discovered and exposed the ghastly fact that the 35th president’s brain had vanished.

“As we sit and talk today, the president’s brain remains missing. Unaccounted for,” he said. More here from the NY Post.

In full disclosure, Dr. Wecht has been on my radio show twice for his previous book(s)and frankly, I agree we are not being told the whole truth about the assassination. Government employees including some in the FBI and CIA challenged evidence and the Warren Commission report as well.

Will we ever know?