It comes as “mounting evidence” of war crimes committed by Russian forces in the city near capital Kyiv will be discussed by a United Nations Security Council today.

The Ukrainian President – who was seen holding back tears as he visited the aftermath on Monday – will address the council, which is pushing to ensure “justice is done”.

Volodymyr Zelensky surveyed the alleged atrocities near capital Kyiv, describing the discovery of raped women and murdered children among the dead.

He was accompanied by defending servicemen after invading troops had retreated from the area.

“This guy is brutal and what’s happening in Bucha is outrageous and everyone’s seen it,” he said in an impassioned speech last night.

A satellite image shows Yablonska Street in the aftermath of the massacre (Image: via REUTERS)

Ukrainian officials have vowed to hunt down the “butchers of Bucha” after hundreds of dead civilians were discovered.

Furthermore, there are several Associated Press reports by journalists on the ground.

(AP) — Six charred bodies piled together were being investigated on Tuesday in Bucha, the town outside of Kyiv where graphic evidence of killings and torture has emerged following the withdrawal of Russian forces.

It was not clear who the people were or under what circumstances they were killed. One of the bodies was smaller than the others, likely a child, said Andrii Nebytov, head of police in the Kyiv region. One of the bodies had a gunshot wound to the head.

The pile of bodies seen by Associated Press journalists was just off a residential street, near a colorful and empty playground, and was visible to passersby as they warily went outdoors to collect aid.

Ukrainian officials have said the bodies of at least 410 civilians have been found in towns around Kyiv that were recaptured from Russian forces in recent days. The Ukrainian prosecutor-general’s office has described one room discovered in Bucha as a “torture chamber.” 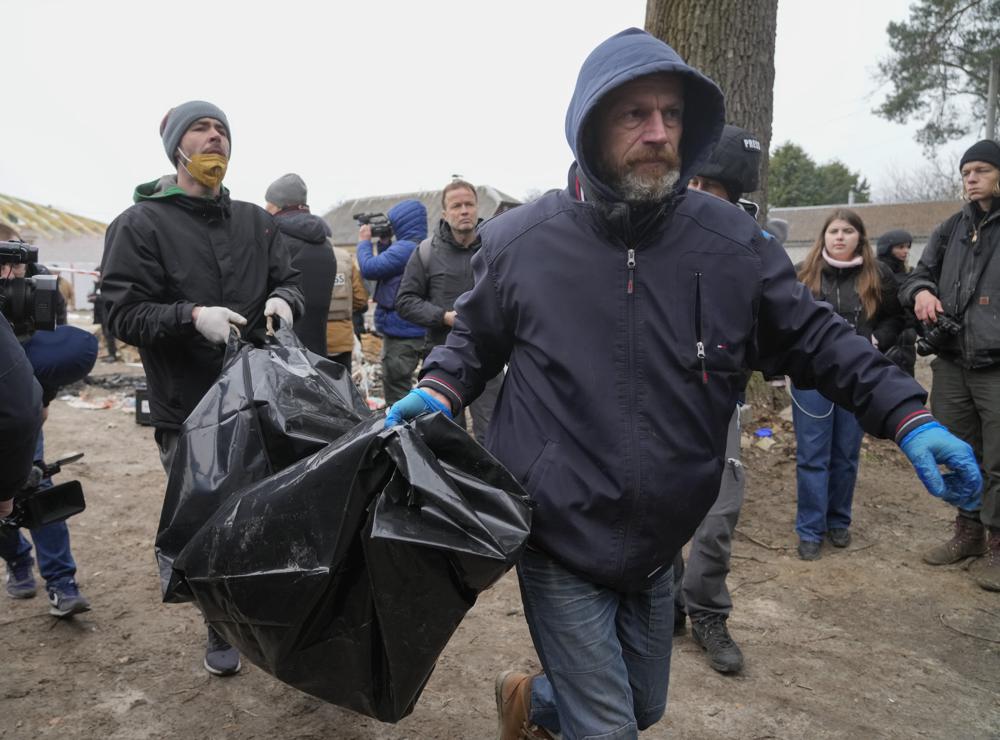 Police carry a dead body of one of six civilians – three women, one teenager girl and two men who were found in Bucha, close to Kyiv, Ukraine, Tuesday, Apr. 5, 2022. Ukraine’s president plans to address the U.N.’s most powerful body after even more grisly evidence emerged of civilian massacres in areas that Russian forces recently left. (AP Photo/Efrem Lukatsky) 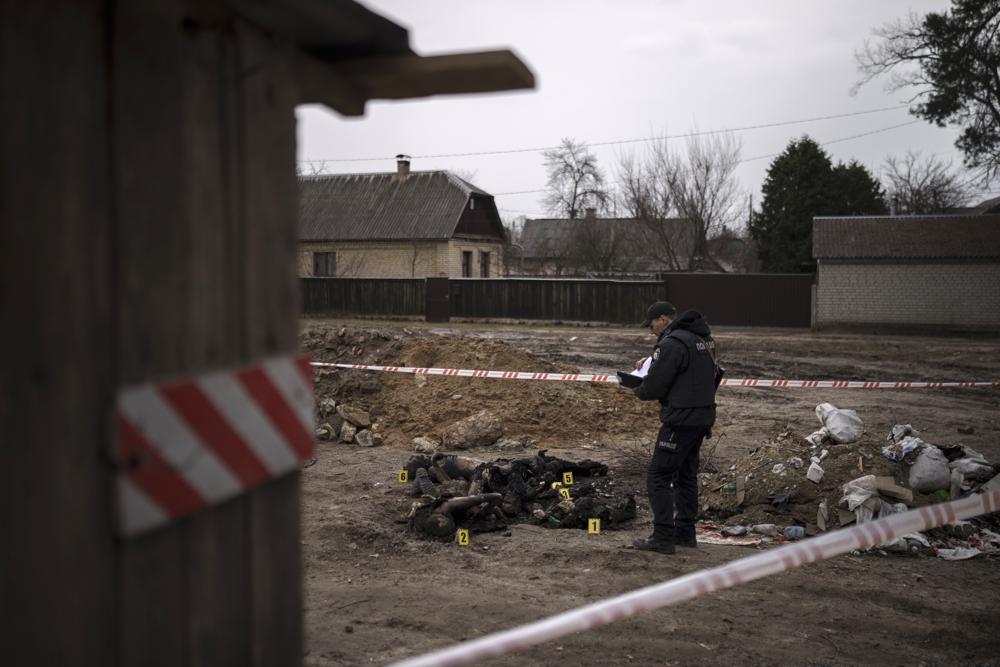 EDS NOTE: GRAPHIC CONTENT – A police officer stands next to six unidentified charred bodies lying on the ground at a residential area in Bucha, on the outskirts of Kyiv, Ukraine, Tuesday, April 5, 2022. Ukraine’s president plans to address the U.N.’s most powerful body after even more grisly evidence emerged of civilian massacres in areas that Russian forces recently left. (AP Photo/Felipe Dana) 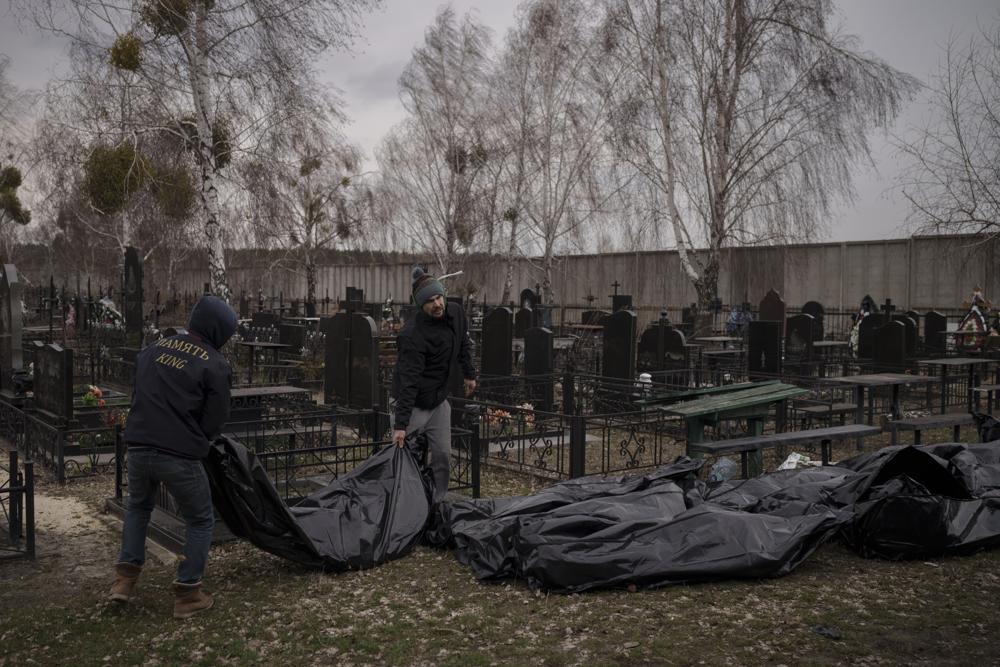 Workers carry the body of people found dead to a cemetery in Bucha, outskirts of Kyiv, Ukraine, Tuesday, April 5, 2022. Ukraine’s president told the U.N. Security Council on Tuesday that the Russian military must be brought to justice immediately for war crimes, accusing invading troops of the worst atrocities since World War II. He stressed that Bucha was only one place and there are more with similar horrors. (AP Photo/Felipe Dana)
New additional detail:

Bucha’s butcher has a name and a face. Omurbekov Azatbek Asanbekovich is the name of the commander of the Russian troops who on March 31 demobilized from the town north of Kiev, leaving behind civilians corpses on the street, in mass graves, Ukrainians executed with a blow to the back of the head and their hands tied.

The activists of InformNapalm, who also published the email and the phone, perhaps turned off after the spread of news of the massacre, as no one answers, revealed his identity on Telegram.

The photo of Asanbekovich, commander of military unit 51460, 64th brigade of motorized riflemen, was also published: young man, in camouflage, a tank behind, full lips, elongated eyes of the Buryats, the largest ethnic minority of Mongolian origin from Siberia. And precisely from Siberia, to be precise from Knyaze-Volkonskoye, unit 51460 left.

“We were also able to find the home address of the Russian executioner,” wrote InformNapalm volunteers, announcing the publication of data, archives and explanations on how to find the Russian commander.

“Every Ukrainian should know their names. Remember. All war criminals will be tried and brought to justice for crimes committed against Ukrainian civilians, ”reads the statement of the Chief Intelligence Directorate of the Ministry of Defense of Ukraine, published on its website. Below is a detailed list of 87 pages with the names of the more than 1,600 Russian soldiers believed to be involved in the massacre. In the list, the soldiers are identified with military rank, name and surname, date of birth and passport details.

Among the surnames there are also some of the most common in Chechnya. Some of their faces can be seen in the photos posted on the net: boys, almond-shaped eyes, smiling in front of the lens.

Bucha residents, for their part, told the news site Obozrevatel that the Russian soldiers “simply went from yard to yard shooting all the men and boys. Among them we recognized Buryats with narrow and long eyes ”.

For Moscow, on the other hand, those corpses, those photos that shocked the whole world, are propaganda, a “staging of the West and Ukraine”.