Well, at least two Supreme Court judges were angry enough to write an opinion blasting the court’s rejection to hear the challenge to the 2nd Amendment regarding the right to carry a weapon outside the home.

On a busy morning of decisions, the court on Monday rejected a challenge out of California regarding the right to carry guns outside their homes, leaving in place a San Diego sheriff’s strict limits on issuing permits for concealed weapons.

But Thomas, in a dissent joined by Gorsuch, countered that the case raises “important questions” – and warned that Second Amendment disputes aren’t getting the attention they deserve from the Supreme Court.

“The Court’s decision … reflects a distressing trend: the treatment of the Second Amendment as a disfavored right,” they wrote.

The case in question involved a San Diego man who said state and county policies requiring “good cause” — a specific reason or justifiable need to legally carry a concealed weapon — were too restrictive. A federal appeals court had ruled for the state, and now those restrictions will stay in place.

A LOOK AT CALIFORNIA GUN LAW

But Thomas and Gorsuch – the court’s newest member – called the appeals court’s decision to limit its review only to the “good cause” provision “indefensible.”

“The Court has not heard argument in a Second Amendment case in over seven years,” they wrote. “… This discrepancy is inexcusable, especially given how much less developed our jurisprudence is with respect to the Second Amendment as compared to the First and Fourth Amendments.”

The justices concluded by warning the court is in danger of acting dismissive toward the right to bear arms:

“For those of us who work in marbled halls, guarded constantly by a vigilant and dedicated police force, the guarantees of the Second Amendment might seem antiquated and superfluous. But the Framers made a clear choice: They reserved to all Americans the right to bear arms for self-defense. I do not think we should stand by idly while a State denies its citizens that right, particularly when their very lives may depend on it. I respectfully dissent.”

The high court decided in 2008 that the Constitution guarantees the right to a gun, at least for self-defense at home.

But the justices have refused repeated pleas to spell out the extent of gun rights in the United States, allowing permit restrictions and assault weapons bans to remain in effect in some cities and states.

More than 40 states already broadly allow gun owners to be armed in public.

The high court also turned away a second case involving guns and the federal law that bars people convicted of crimes from owning guns.

The Trump administration had urged the court to review an appellate ruling that restored the rights of two men who had been convicted of non-violent crimes to own guns.

The federal appeals court in Philadelphia ruled for the two men. The crimes were classified as misdemeanors, which typically are less serious, but carried potential prison sentences of more than a year. Such prison terms typically are for felonies, more serious crimes.

The administration says that the court should have upheld the blanket prohibition on gun ownership in the federal law and rejected case-by-case challenges.

Justices Ruth Bader Ginsburg and Sonia Sotomayor said they would have heard the administration’s appeal. 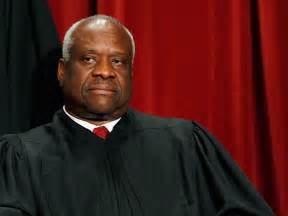 JUSTICE THOMAS, with whom JUSTICE GORSUCH joins, dissenting from the denial of certiorari.

The Second Amendment to the Constitution guarantees that “the right of the people to keep and bear Arm[s] shall not be infringed.” At issue in this case is whether that guarantee protects the right to carry firearms in public for self-defense. Neither party disputes that the issue is one of national importance or that the courts of appeals have already weighed in extensively. I would therefore grant the petition for a writ of certiorari.

I California generally prohibits the average citizen from carrying a firearm in public spaces, either openly or concealed. With a few limited exceptions, the State prohibits open carry altogether. Cal. Penal Code Ann. §§25850, 26350 (West 2012). It proscribes concealed carry unless a resident obtains a license by showing “good cause,” among other criteria, §§26150, 26155, and it authorizes counties to set rules for when an applicant has shown good cause,§26160.In the county where petitioners reside, the sheriff has interpreted “good cause” to require an applicant to show that he has a particularized need, substantiated by documentary evidence, to carry a firearm for self-defense. The sheriff ’s policy specifies that “concern for one’s personal safety” does not “alone” satisfy this requirement.

Petitioners are residents of San Diego County (plus an association with numerous county residents as members)who are unable to obtain a license for concealed carry due to the county’s policy and, because the State generally bans open carry, are thus unable to bear firearms in public in any manner. They sued under Rev. Stat. §1979, 42

U. S. C. §1983, alleging that this near-total prohibition on public carry violates their Second Amendment right to bear arms. They requested declaratory and injunctive relief to prevent the sheriff from denying licenses based on his restrictive interpretation of “good cause,” as well as other “relief as the Court deems just and proper.” First Amended Complaint in No. 3:09–cv–02371, (SD Cal.) ¶¶149, 150, 152. The District Court granted respondents’ motion for summary judgment, and petitioners appealed to the Ninth Circuit.

In a thorough opinion, a panel of the Ninth Circuit reversed. 742 F. 3d 1144. The panel examined the constitutional text and this Court’s precedents, as well as historical sources from before the founding era through the end of the 19th century. Id., at 1150–1166. Based on these sources, the court concluded that “the carrying of an operable handgun outside the home for the lawful purpose of self-defense . . . constitutes ‘bear[ing] Arms’ within the meaning of the Second Amendment.” Id., at 1166. It thus reversed the District Court and held that the sheriff ’s interpretation of “good cause” in combination with the other aspects of the State’s regime violated the Second Amendment’s command that a State “permit some form of carry for self-defense outside the home.” Id., at 1172.

The Ninth Circuit sua sponte granted rehearing en banc and, by a divided court, reversed the panel decision. In the en banc court’s view, because petitioners specifically asked for the invalidation of the sheriff ’s “good cause” interpretation, their legal challenge was limited to that aspect of the applicable regulatory scheme. The court thus declined to “answer the question of whether or to what degree the Second Amendment might or might not protect a right of a member of the general public to carry firearms openly in public.” Peruta v. County of San Diego, 824

Read more here of the decision start at page 32.