WASHINGTON— With three days left in his presidency, Barack Obama made his final appointments to administration positions, including adding 10 members to the Holocaust Memorial Council.

Most notable on that list is Ben Rhodes, a long-time Obama aide and speechwriter who managed the White House messaging on selling the Iran deal and explaining the US decision to abstain on a United Nations Security Council resolution last month that condemned Israeli settlements as illegal.

Rhodes, whose official title is deputy national security adviser for strategic communications, was a source of controversy after a New York Times Magazine profile portrayed him as bragging about misrepresenting the nuclear accord to shape American public opinion.

In the article, Rhodes spoke of creating an “echo chamber” of nongovernmental organizations, nuclear proliferation experts and journalists to gain support for the deal, as well as portraying a false impression of Iran’s regime.

After spending some time in the Washington think-tank world, he became a foreign policy speechwriter for candidate Obama in 2007 and remained a staffer in his White House for the entirety of his tenure.

Obama also deployed the 39-year-old spokesman as a media envoy to explain his administration’s decision to allow a resolution that called for an end to all settlement construction in areas Israel captured in the 1967 Six Day War.

Beyond a number of interviews with US broadcast media, Rhodes conducted a conference call with reporters moments after the motion passed, explaining that Prime Minister Benjamin Netanyahu ultimately created the outcome of the vote with the policies he instituted.

“Netanyahu had the opportunity to pursue policies that would have led to a different outcome today,” said Rhodes, who has a Jewish mother and Episcopalian father.

After the Israeli premier and other high-level officials said they had “ironclad” evidence the United States drafted and lobbied on behalf of the measure, Rhodes took to the interview circuit to deny the charges.

In a particularly personal dig, Israel’s ambassador to the United States and former GOP activist, Ron Dermer, told multiple news outlets that Rhodes was an “expert in fiction,” presumably alluding to his unsuccessful aspirations to be a novelist.

Congress created the Holocaust Memorial Council in 1980 in order to fundraise for the United States Holocaust Memorial Museum in Washington, DC. The 68-member council meets twice a year and consists of 55 members appointed by the president. They serve five-year terms.

Then just 4 days ago, Free Beacon reported this on Ben Rhodes:

The Center for Accuracy in Middle East Reporting in America, or CAMERA, found the error in Rhodes’ interview with PBS host Judy Woodruff on Dec. 23.

Woodruff asked Rhodes about the administration’s decision to forgo its veto power and abstain from a U.N. Security Council vote on a resolution condemning Israeli settlement activity in the West Bank and East Jerusalem, allowing the measure to pass. The abstention broke with decades of U.S. policy to defend the Jewish state at the U.N. from what critics call anti-Israel resolutions.

“These settlements are encroaching further and further beyond the separation barrier that the Israelis themselves built,” Rhodes said. “Thousands of new settlements are being constructed, and, frankly, if these trends continue, it will be impossible to realize a two-state solution.”

Rhodes doubled down on his claim, later in the interview stating, “You saw tens of thousands of settlements being constructed; you saw as was addressed in the resolution, incitement to violence on the Palestinian side.”

Peace Now, an anti-settlement organization that tracks such activity, has much lower numbers than Rhodes, CAMERA reported. According to Peace Now’s tally, there are 131 Israeli settlements and 97 outposts in the West Bank, making for a total of 228 settlements–not tens of thousands currently being constructed as Rhodes claimed. The Israeli government did not sanction the 97 outposts and does not recognize them as legitimate.

**** One last item that has been declassified: The matter of Israel giving up land and how the debate was framed including planted words since 1968 says that it will not happen and should not happen. More here on the National Intelligence Estimate. 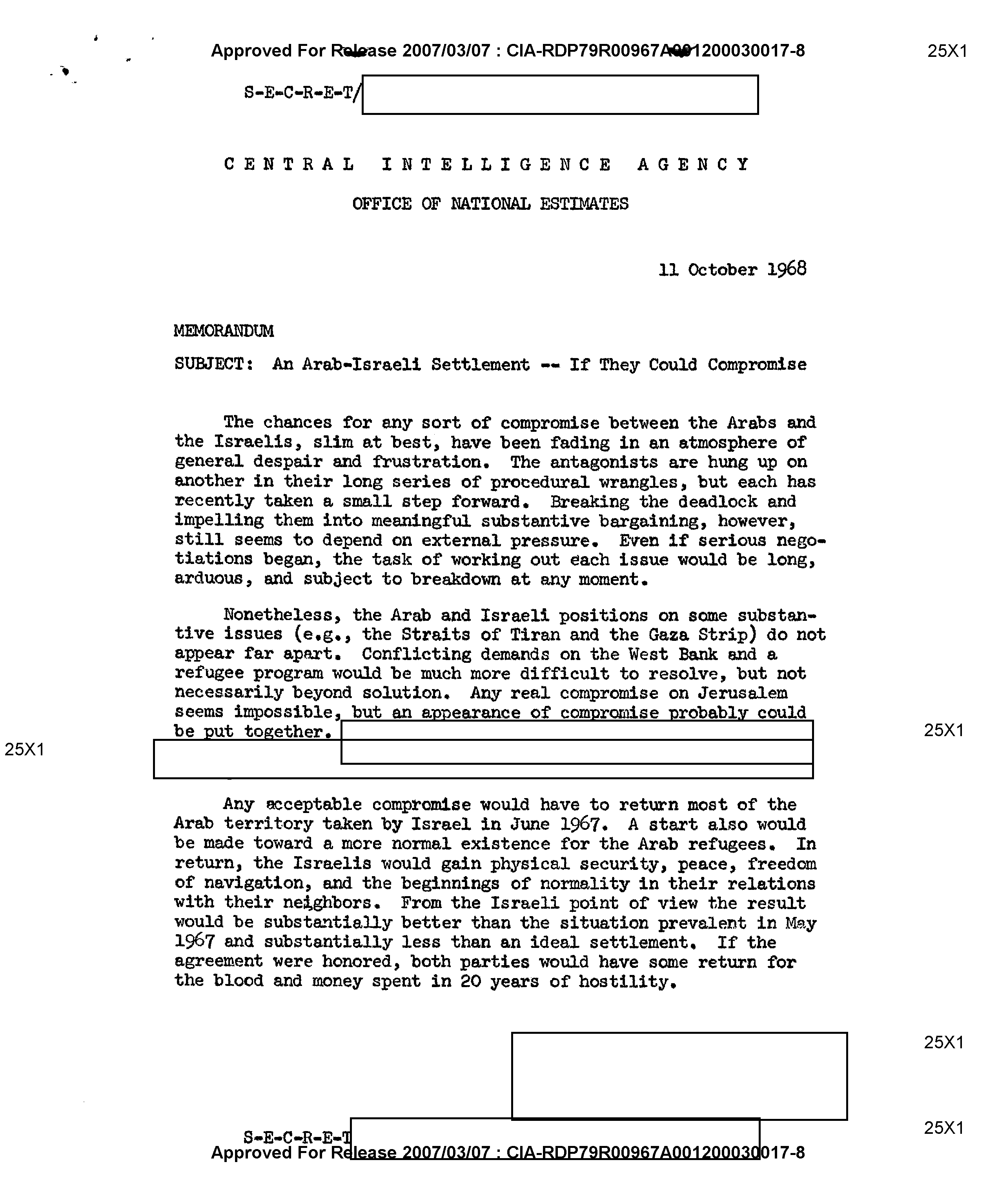