In 1979, the United State severed ties with Iran. An interesting twist however, Iran did not sever ties with factions inside the United States and pro-Khomeini Shiite activities. Even back in 1979 and moving forward, Iranian influence and Islamic influence were making end roads into the culture and driving down Main Street USA. No one noticed except the FBI. But the investigations of the FBI remained classified until 2008 and then the reports were meant to remain obscure and out of sight from America.

Moving into the United States went unnoticed such that Islam is now a common and accepted condition in America but this is the time to fight back as Islam is political and packaged as a religion. Sharia law cannot compete with the U.S. Constitution however, so far it has.

So, here we are witnessing Islamic indoctrination on our televisions right in our homes but who notices that? CAIR is a co-conspirator of the Holyland Foundation trial and was deemed such by the Department of Justice. Why then would MTV partner with CAIR?

No one at MTV is talking which likely is to understand that no one at MTV did their homework or bothered with vetting. So, the homework has been done for them and perhaps you will collectively contact MTV and hold class with their leadership. Then have a talk with your family and then have a talk with your cable provider until MTV admits the error and fixes the matter. 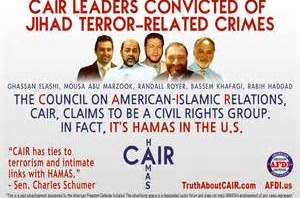 MTV has seriously erred by choosing CAIR, an organization with an extremist history that tars every opponent as an anti-Muslim bigot.
By Ryan Mauro

MTV is including the Council on American-Islamic Relations (CAIR), a U.S. Muslim Brotherhood entity with a history of radicalism, in its “world-class coalition of expert partners” for a campaign to combat discrimination and inequality. CAIR has a history of tarring its opponents by calling them “anti-Muslim” or “Islamophobes.”

The multi-year “Look Different” campaign will use celebrity activism, television shows and social media to influence the over 500 million households that MTV is available in. While well-intentioned, MTV unfortunately chose to include CAIR, an organization with an extremist history that tars every opponent as an anti-Muslim bigot.

The Justice Department designated CAIR an unindicted co-conspirator in the largest terrorism-financing trial in U.S. history. The government listed CAIR as an entity of the U.S. Muslim Brotherhood, specifically its secret Palestine Committee; a body set up to covertly support the Hamas terrorist group.

The designation was upheld by a federal judge in 2009 because of “ample” evidence to show that CAIR is part of the Muslim Brotherhood’s pro-Hamas network in America. After the designation, the FBI formally ended its use of CAIR as an outreach partner “until we can resolve whether there continues to be a relationship between CAIR or its executives with Hamas.”

In 2004, CAIR Executive Director Nihad Awad said in an interview with Al-Jazeera that CAIR does not consider Hamas and Hezbollah to be terrorist organizations. He said, “We do not and will not condemn any liberation movement inside Palestine or Lebanon.”

In 2007, federal prosecutors said in a court filing: “From its founding by Muslim Brotherhood leaders, CAIR conspired with other affiliates of the Muslim Brotherhood to support terrorists … the conspirators agreed to use deception to conceal from the American public their connections to terrorists.”

You can read the Clarion Project’s fully-documented profile of CAIR here.

The Muslim Brotherhood and Hamas have a history of extremism and anti-Semitism; the exact type of sentiment that MTV’s project seeks to counter. Yet, MTV is embracing an organization with confirmed links to these groups. CAIR’s fundraising banquets regularly feature radical speakers that promote violence and anti-American and anti-Semitic propaganda and conspiracy theories.

“In our work, we see biases carried out in hurtful actions almost every day. The fact that so many of the young people MTV polled want to work to change or eliminate harmful biases fills us with hope that campaigns like Look Different can effect long-lasting, positive changes in our society,” CAIR spokesman Amina Rubin said.

Unwarranted fear of Muslims; term frequently used by Islamist groups and their allies to label critics of Islamic extremism as bigots in order to stifle criticism.

According to Abdur-Rahman Muhammad, a former member of a U.S. Muslim Brotherhood front group (IIIT), “This loathsome term is nothing more than a thought-terminating cliche conceived in the bowels of Muslim think tanks for the purpose of beating down critics.”

” card on anyone who stands in their way, drawing the ire of anti-Islamist Muslim activists. It is part of a calculated political strategy and CAIR will utilize MTV towards this end if given the opportunity.

“Name-calling with the term Islamophobia is an aggressive tactic popularized by apologists for Radical Islam to silence individuals who attempt to tell the truth about Jihadist Islam,” writes Muslim activist Tawfik Hamid, a former member of Ayman al-Zawahiri’s group in Egypt.

Raheel Raza, President of the Council for Muslims Facing Tomorrow, describes the “Islamophobia” tactic as “a form of emotional extortion intended to extract special concessions from well-meaning but gullible people the West.”

“This loathsome term is nothing more than a thought-terminating cliché conceived in the bowels of Muslim think tanks for the purpose of beating down critics,” he explains.

This tactic is even used on devout Muslims. Dr. Zuhdi Jasser, a practicing Muslim, has been accused of belonging to an “Islamophobia Network” countless times by CAIR. The group also went after the American Islamic Congress without provocation, accusing it of promoting “Islamophobia” just because it hasn’t adopted CAIR’s political causes.

This stands in sharp contrast to CAIR’s treatment of Islamist radicals, most recently defending Jamaat ul-Fuqra, a virulently anti-Semitic group with a terrorist history.

The American Islamists have been using this strategy since long before 9/11. For example, Imam

Religious authority figure; usually the leader of a mosque.

Siraj Wahhaj, a radical cleric that helps CAIR fundraise, can be seen preaching this theme in this video from around the time of the 1993 World Trade Center bombing.

Wahhaj tells the audience that there’s an anti-Muslim conspiracy involving the U.S. government and Israel and the 1993 World Trade Center bombing, he claims, is part of it. The overall message is the same one that we hear today: The Islamists’ opponents are part of an anti-Muslim network that is hijacking the institutions of power.

CAIR’s efforts to use MTV’s campaign for political advantage will be endorsed by the Southern Poverty Law Center, another organization included in MTV’s coalition. The think-tank equates any recognition of the U.S. Muslim Brotherhood with anti-Muslim bigotry.

“The sole evidence for this conspiracy theory is a 20-year old document outlining a plan for such a [Muslim Brotherhood] takeover, which has since been debunked as the fantasy of a single Muslim Brotherhood member,” the Center incorrectly claims.

The Muslim Brotherhood document the Center refers to introduced as evidence in the Holy Land Foundation trial. Contrary to what the Center says, the file’s authenticity has not been debunked or even seriously challenged.

And even if it was, it wouldn’t make any difference. Supporting proof comes in the form of declassified FBI documents, court filings, U.S. government determinations, other internal Brotherhood documents and the Islamists’ own actions and statements.

On May 19, the Clarion Project contacted MTV to inform the network of CAIR’s history and its false labeling of any and all critics as anti-Muslim “Islamophobes” with bigoted agendas. We requested a statement in response. MTV did not respond.

MTV has seriously erred by choosing CAIR as an “expert partner” in combating intolerance and discrimination. The well-meaning campaign runs the risk of becoming a platform for CAIR to assault the integrity of its opponents.