We tend to have short memories but we have a chance to recall Russian operatives in the United States during all things RussiaGate. We learned that oligarchs clean dirty money and escape investigations generally through covert real estate transactions not only in the United States but especially in Britain.

With the sanctions…many of them are now scrambling and should be. Remember that Alfa Bank fake scandal tying Donald Trump directly to the bank servers?

OREANDA-NEWS Billionaires Mikhail Fridman and Peter Aven “in the near future” will resign from the board of directors of Alfa-Bank because of the sanctions imposed against them. Businessmen Alexander Galitsky and Sergey Matsotsky will leave the council together with them. On February 28, against the background of the ongoing Russian “special operation” in Ukraine, the EU blacklisted a number of businessmen, military personnel and public figures.

The press service of Alfa-Bank reported that the board of directors will be headed by the president of the credit institution Oleg Sysuev, who previously held the position of first deputy chairman.

After the start of the “operation” of the Russian army in Ukraine, Western countries imposed new sanctions. Among them are personal restrictions on high-ranking officials, including President Vladimir Putin. Also blacklisted were large businessmen, military, parliamentarians and cultural figures.

Earlier, The Secret wrote that the government would spend part of the National Welfare Fund to buy shares of Russian companies. In 2022, up to 1 trillion rubles will be allocated for these purposes.

While Britain is going after their own oligarchs in and around London…good ole’ Miami Beach has some work to do.

Altogether, Russian buyers accounted for just 0.8% of all foreign buyers who purchased U.S. residential property between April 2015 and March 2021. During that time, total purchases by foreign-born buyers accounted for just 1.8% of total existing-home sales. A little over half of the Russian purchases were all-cash deals, compared with 27% of overall transactions in January.

Florida was the most popular destination for Russian-born buyers, representing 29% of these deals. Georgia was next at 16%, followed by New York at 13%. But as the report notes, even within Florida these transactions represent a mere fraction of overall home purchases. Only 0.2% of the homes sold in Florida between July 2020 and June 2021 were bought by Russian-born individuals.

Sunny Isles, Florida, has long been an escape for Russia’s wealthy and elite, who have purchased so much luxury property in the area that it’s become known as “Little Moscow” and “Moscow by the Sea.” 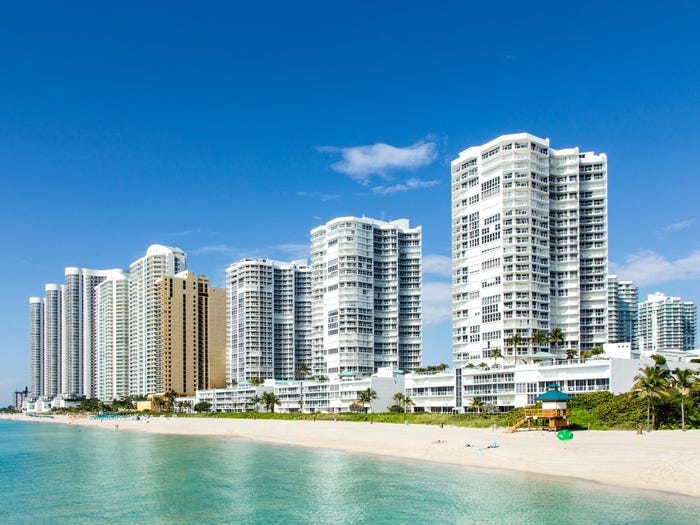 “They love to be here, and they like to spend their money and enjoy their life,” Lana Bell, a Russian real-estate agent, told the News Nation correspondent Brian Entin on Monday.

President Joe Biden issued sanctions this week that target Russia’s elite and their families and restrict the Kremlin’s ability to access Western financial institutions. Though people in Little Moscow have been worried the escalating Russia-Ukraine conflict will threaten their lifestyle and blacklist them from buying American real estate, Entin reported, Bell said it hadn’t been a problem. Experts told the Miami Herald’s Michael Wilner the sanctions in place were unlikely to have a strong effect in South Florida. But Russia’s invasion of Ukraine on Thursday showed the tensions were far from over.

“We are extending the reach of US sanctions to prevent the elites close to Putin from using their kids to hide assets, evade costs, and squander the resources of the Russian people,” a National Security Council official told the Miami Herald. “This is a new approach.”

Anders Åslund, a Swedish economist and the author of “Russia’s Crony Capitalism: The Path from Market Economy to Kleptocracy,” doesn’t think this will affect the Russian rich in the greater Miami region that Little Moscow is in. He told Wilner that the Miami Russians weren’t powerful enough to feel the sanction burn.

“These are comfortable people, rather than the top people,” he said.

In Sunny Isles, condos can cost as much as $35 million. The most expensive home in the area listed on Sotheby’s is $13.9 million. It’s an area where the Trump brand is dominant, which The Washington Post reported was part of the appeal among Russian investors looking to move their money in the post-Soviet economy.

Jose Lima, a salesperson for the company that developed the region’s Trump towers, told The Post in 2016 that Russian speakers bought about one-third of the 500 units he sold. (While Trump doesn’t actually own the buildings, The Post reported, he licensed the use of his name there.)