In an interview with CBS news after being fired Monday evening, Spencer said Trump’s insistence on maintaining Gallagher’s rank as a Navy SEAL tells troops that they “can get away with it,” if they commit a crime. “We have to have good order and discipline, it’s the backbone of what we do,” he said. Spencer added be believes Trump doesn’t fully understand the definition of a war fighter. “A war fighter is a profession of arms,” Spencer told CBS’s David Martin outside the Pentagon. “And a profession of arms has standards.”

Did any of the Pentagon military brass or bureaucracy (profession of arms) speak out at all when President Obama interfered/intervened of the scandal of Bowe Berghdal and the trade of 5 Taliban commanders? What about when President Obama commuted the 35 year sentence of Army Pvt. Chelsea Manning for stealing thousands of pages of classified material? Secretary Spencer where is your commentary on those cases? What about General Cartwright when he admitted to lying to federal investigators on the 2012 leak of classified material to the press regarding the covert cyber attack against Iran’s nuclear program, a cyber operation known at Stuxnet?

As the daughter of a Marine that fought in World War ll and Korea, it is striking to me the unique differences of war then as to military conflict today. Anyone out there care to comment on the number of bureaucrats and lawyers today as compared to those battles in the last several decades? Anyone? To be sure, the ethos of the military for decades has been core values, ethics, loyalty, duty, respect, selfless service, honor, integrity and personal courage. But hold on. To currently serving military and to veterans, please comment, has the brass bureaucracy and lawyers impeded the ethos of the military over political correctness and rules of engagement?

Secretary Spencer has earnestly defended the handling of the Gallagher case. Do you sir defend the Navy prosecutors for spying on Gallagher’s defense team among other tactics such that the prosecution team was fired? So, the latest review on Gallagher was to review the case for keeping his rank and trident over a photo with a corpse. Others ‘posing’ with the corpse were not punished, why not? Oh yeah they got immunity in exchange for testimony. You mean no penalty or drop in rank or removal of an award?

I hold the collection of slides and film my father took at war in Korea. Among those photos. he stands beside a corpse with a cigarette in the mouth. Should my father’s Navy Cross be posthumously be revoked? And when it comes to Rules of Engagement, would the bureaucracy and lawyers forbid fixed bayonets?

First Lieutenant Lucian L. Vestal of “Fox” Company, 2d Battalion, Fifth Marine Regiment was a man with an easy smile who liked to joke with his platoon. The smile left his face when he received his mission on May 28 to make a frontal assault across open ground near Hangye and take a hill.

He ordered his men to fix bayonets and led them out. There is something inherently eerie about the command to fix bayonets in combat. The sound of cold metal sliding from the scabbard, the metallic click of the knife locking to the rifle lug and bonding with its man chills the soul more than chambering a round. Men can chamber a round when hunting game or on the rifle range. Marines seldom fix naked steel unless against other men when death is imminent; one-on-one, muno u mum. The site of Marines advancing with fixed bayonets also has a disturbing psychological effect on the enemy. The Communists opened up with everything they had; machine guns, small-arms fire and grenades.

Marines around Vestal were dropping and only a few feet from the enemy position, Vestal himself was painfully wounded in the stomach. They closed with the Communists, driving them in fear from their  positions while Vestal calmly redeployed his platoon, directed the evacuation of his wounded and set up a screen of protective fire. They evacuated Vestal with the last of the wounded. He used his smile to hide his pain and again joked with his fellow Marines, who promptly recommended Vestal for the Navy Cross.

War is for sure ugly. It could be argued today it is uglier by an additional means and that is bureaucracy. In 2018, the Senate Armed Services Committee approved the first ‘chief management officer’ for the Pentagon to ‘shake up the bureaucracy. Congress has written the law may times and that bureaucracy seeps down to the commands and battlefield. The warfighters see it, feel it, experience it while ‘wining hearts and minds of the enemy’ but not so much for our own warfighters. 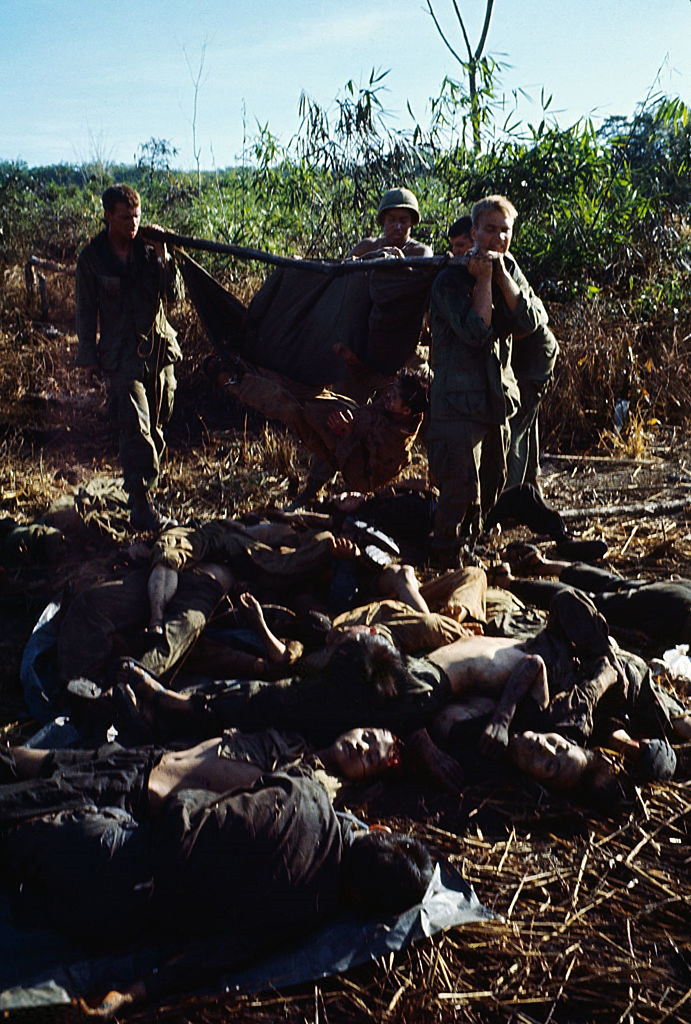 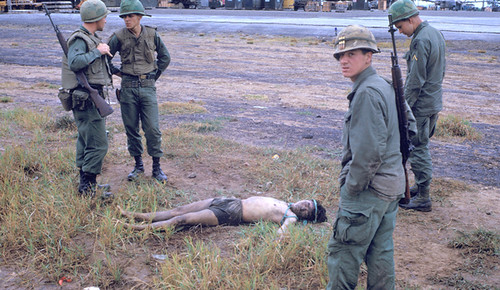 A dead Viet Cong soldier who broke into the air base at An Khe in the Highlands of the Republic of South Vietnam. Take a look at the Army soldiers and what they are wearing. This is 1968 and in the Highlands some of them have not been issued jungle fatigues, boots and M16’s. However, back in Saigon all the brass were wearing starched jungle fatigues and M16’s were everywhere. No wonder we called them REMF’s. Tom Bigelow photo.

Today frontal assaults on the enemy or fixed bayonets are but a forgotten memory. Bureaucracy and lawyers make it so. Law and order is well understand among the ranks as is the military ethos, a photo with a corpse is hardly crime for court martial or is it? And the long war goes on.