The Pentagon knows for sure and is not talking or doing any reporting. We have advanced technology to see the activity at Bagram including GeoSpatial systems. Anyone asking the right questions? Not so far but read on. 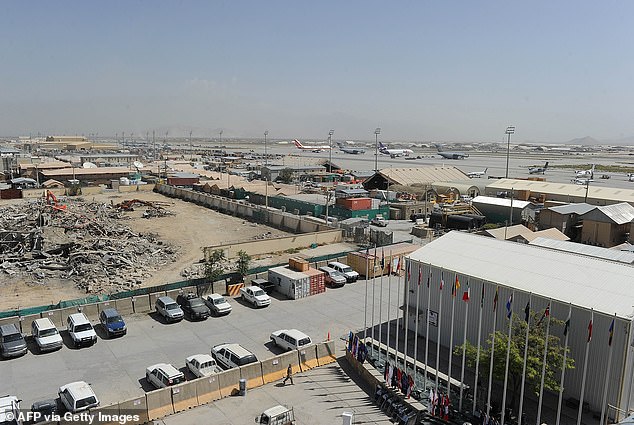 Ah, but the Taliban denies this story…of course they do as does the Chinese Foreign Minister.

The UK newspaper’s report was based on its own sources, noting that power was restored in the airbase the US left in July.

The Daily Mail said unconfirmed reports suggest that the Chinese forces are the ones who “occupied the former US stronghold.”

The Daily Mail also noted that many military aircraft had been seen taking off and landing in the airbase, as images and videos circulating on social media show its floodlights in the distance amid reports of flights.

China, a country bordering Afghanistan, accused the United States of “leaving chaos” behind in Afghanistan after withdrawing from the country. This comes especially after scenes of civilians attempting to escape through the Kabul airport as the US was evacuating its nationals and embassy staff went viral.

A Chinese government spokesperson later declared that China was ready to enhance cooperation with Afghanistan after the Taliban took control of the country.

In July, ahead of the US withdrawal, a Taliban delegation met with Chinese Foreign Minister Wang Yi, and the Taliban pledged that Afghan territories would not be used to undermine the security of other countries. In return, China offered economic support and investments to rebuild the country torn by the 20-year US-NATO war on it.

The Taliban has already begun talking up plans for cooperation with Beijing.

A Taliban spokesman told an Italian newspaper that Afghanistan’s new rulers will rely primarily on financing from China as it seeks to head off a looming humanitarian crisis and begin reconstruction.

‘China is our most important partner and represents a fundamental and extraordinary opportunity for us, because it is ready to invest and rebuild our country,’ Zabihullah Mujahid told La Repubblica in an interview.

He also praised the New Silk Road – part of the Belt and Road Initiative that China is using to open up trade routes – and said Beijing investment could help reopen copper mines.

A report suggests China’s deployment might not be coming for another two years and it would not involve them taking over the base, merely sending personnel at the Taliban’s invite.

China likely achieve its latest ambitions for Bagram through help from Pakistan, Sun says, adding, ‘I am sure they would like to cut out the middleman,’ she added. ‘If the Taliban requests Chinese assistance, I think China will be inclined to send human support. Most likely, they will frame it as technical support or logistic support.’ source

Chinese Delegation Visits Bagram Airbase: As soon as America is out of Afghanistan, Pakistan and China are showing their interest in almost every matter related to this country. A few days before the announcement of the interim government of the Taliban, Faiz Hameed, the chief of Pakistani intelligence agency ISI, arrived in Kabul. Now the news has come that the Chinese delegation has visited the Bagram airbase last week. This airbase was Afghanistan’s largest military base for the US during the war that lasted for two decades. It is also considered strategically very important.

According to a media report, this Chinese delegation included senior intelligence and military officials (Chinese Delegation at Bagram Airbase). It is not yet clear why they visited the airbase, but they are believed to have come here allegedly “to gather evidence and data against the US”. According to sources, it seems that China is developing a ‘facility’ here in collaboration with Taliban and Pakistan to keep an eye on Uyghur Muslims living in its Xinjiang province.

Chinese officials who came through Pakistan

The report quoted sources as saying that the most interesting thing during this period was that instead of landing at Kabul airport, Chinese officials came here via Pakistan. The arrival of Chinese officials to Bagram airbase is also a matter of concern for India (China Bagram Airfield). The report quoted senior government sources as saying, “We are confirming the news of the arrival of the Chinese group here. This is very serious… If they establish a base here with Pakistan, they will encourage terrorist activities and create instability in the region.

Earlier this month, Pakistan ISI Chief Faiz Hameed met the intelligence chiefs of Russia, China, Iran and Tajikistan. During this, Hameed informed them about the Taliban government of Afghanistan and the changes that took place there. Hameed allegedly spewed a lot of venom against India as well (Taliban Afghanistan Government). At the same time, in the internal government formed by the Taliban with the Haqqani network, terrorists have been placed in high positions. This government was announced about three days after Hameed’s visit. Talking about China, it is the first country that has established diplomatic contacts with Afghanistan after the occupation of Taliban.