China is “clearly militarizing the South China (Sea),” said Admiral Harry Harris, head of the U.S. Pacific Command, adding: “You’d have to believe in a flat Earth to think otherwise.”

Harris said he believed China’s deployment of surface-to-air missiles on Woody Island in the South China Sea’s Paracel chain, new radars on Cuarteron Reef in the Spratlys and its building of airstrips were “actions that are changing in my opinion the operational landscape in the South China Sea.”

Soon after he spoke, U.S. government sources confirmed that China recently deployed fighter jets to Woody Island. It was not the first time Beijing sent jets there but it raised new questions about its intentions.

“The question is whether they might stay this time,” said Gregory Poling, director of the Asia Maritime Transparency Initiative at the Center for Strategic and International Studies.

But U.S. and Chinese foreign ministers signaled that despite disagreements over the South China Sea, they were near agreement on a U.N. resolution against North Korea for its recent nuclear and missile tests and stressed their cooperation on economic and other issues. More from Huffington Post here.

“China follows a national defense policy that is defensive in nature,” he said. “China’s deepening military reforms and its strengthening of weapons and equipment building are aimed at maintaining sovereignty, security and territorial integrity and guaranteeing China’s peaceful development.”

The report to the U.S. Congress on Friday said that China was focused on developing and weaponizing the islands it has built in the disputed waters of the South China Sea so it will have greater control over the maritime region without resorting to armed conflict.

It accused China of “increasingly assertive efforts to advance its national sovereignty and territorial claims” and a lack of transparency about its growing military capabilities that are causing tensions with other countries in the region.

Yang said it was the United States that had been “frequently sending military aircraft and warships to the South China Sea to make a show of force.”

In part from FreeBeacon: The construction indicates China “is attempting to bolster its de facto control by improving military and civilian infrastructure in the South China Seas.”

The airfields, harbors, and resupply facilities will allow China to “detect and challenge” rival claimants to the island and increase the military capabilities available to China and short their deployment times.

The report shows before-and-after pictures of seven disputed Spratly islands, including Fiery Cross Reef where a major buildup took place on 663 new acres of the island. 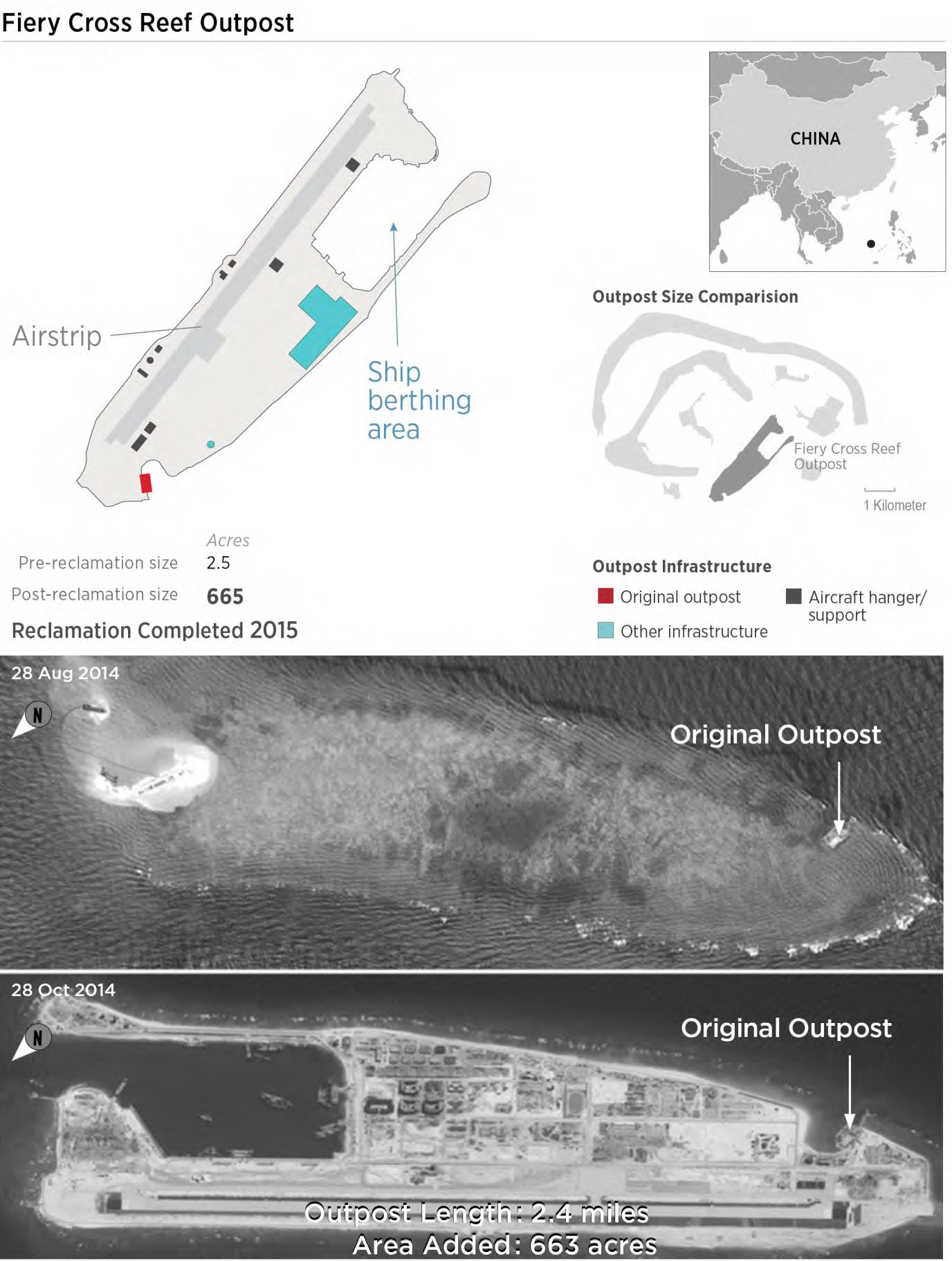 China’s missile buildup is one of the most prominent features of the PLA arsenal with new missiles and the addition of multiple warheads on both new and older systems.

The report also revealed that China is planning a new long-range stealth bomber that would give Beijing a nuclear triad along with ground- and sea-based strategic missiles.

Several new attack and ballistic missile submarines also have been built and are continuing to be deployed.

China is also building up its space warfare capabilities, and last year, it advanced work on an anti-satellite missile tested in July 2014.

A section of the report on China’s energy strategy reveals that China will remain heavily dependent on foreign oil. Sixty percent of its oil was imported in 2015, and by 2035, Beijing will be importing 80 percent of its oil.

Energy supplies are vulnerable to disruption as some 83 percent of China’s oil currently passes through the South China Sea and Strait of Malacca.

Land pipelines are being built from Russia and Kazakhstan as part of efforts to maintain a supply chain that is less susceptible to disruption.

Ten years ago China’s military had a limited capability to strike targets beyond the 100-mile-wide Taiwan Strait. “Today, however, China is fielding an array of conventionally armed short-range ballistic missiles (SRBMs), as well as ground- and air-launched land-attack cruise missiles (LACMs), special operations forces (SOF), and cyber warfare capabilities to hold targets at risk throughout the region,” the report said. 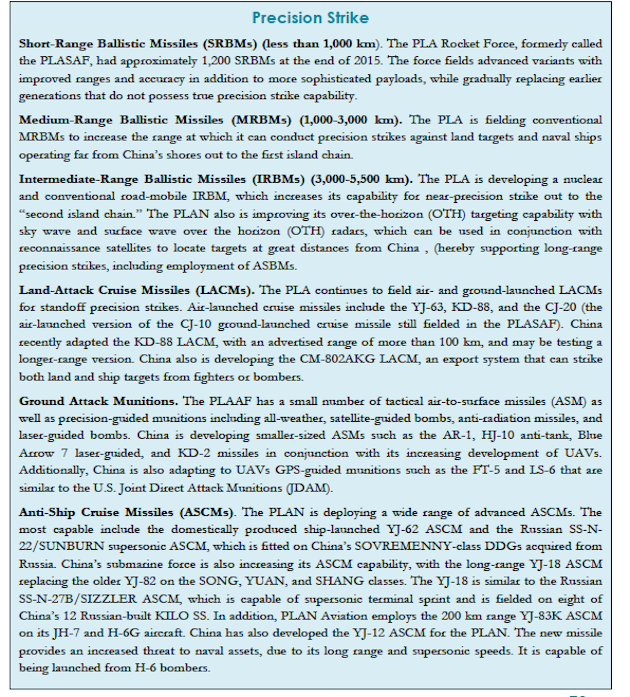 “U.S. bases in Japan are in range of a growing number of Chinese [medium-range ballistic missiles] as well as a variety of [land-attack cruise missiles],” the report said, adding that Guam could be targeted by long-range cruise missiles on H-6K bombers that conducted the first flights into the Pacific last year.

The DF-26 missile also was unveiled at a military parade and can conduct precision attacks on Guam, a major U.S. military hub and a key base for the Pentagon’s pivot to Asia.

In a future conflict, the PLA plans to attack supply centers and power projection capabilities that are used in coordinating transportation, communications, and logistics.

China’s military spending was estimated in the report to be greater than $180 billion but could be larger because of Chinese secrecy. The report estimates the budget will grow to $260 billion by 2020.

The report contains a section explaining that the PLA remains a politicized “Party army” rather than a traditional national armed force.

Chinese state media rejects the notion of an apolitical national army because Chinese leaders regard the Soviet Communist Party lack of control over the military as a key factor in the 1991 collapse of the Soviet Union.

One new reform was creating a Political Work Department within the PLA to maintain party control. “The PLA’s political work system is the primary means through which the CCP ‘controls the gun’ in accordance with Mao Zedong’s famous dictum that ‘political power grows out of the barrel of a gun,’” the report says.

The Pentagon’s policy, according to the report, seeks to “deepen practical cooperation” while managing differences, a policy that critics say has led to misunderstanding China’s growing official animosity toward the United States.

The solution offered in the report for dealing with the increasing Chinese military threat is to “monitor and adapt” to the buildup and encourage Beijing to end the secrecy of its strategy and arms buildup.

The report made no mention of China’s growing anti-American stance as reflected in both state-run media and official military writings.

In 2013, China’s Communist Party-affiliated newspaper Global Times published a detailed report on future nuclear attacks on the western United States showing how the strikes would kill 12 million Americans through blast and radiation.

The Obama administration and Pentagon made no condemnation of the unprecedented nuclear threat. Read more here.