From last month: The missing soldiers were identified as Maj. Jan Mohammad Arash, Cpt. Mohammad Nasir Askarzada, and Cpt. Noorullah Aminyar.Earlier, two Afghan policemen identified as 22-year-old Mohammad Yasin Ataye and 24-year-old Mohd Naweed Samimi vanished during a training visit in United States last week.The two were among the 31 Afghan police officers who are on a visit in United States to work with the US Drug Enforcement Administration (DEA).

**** Some have been missing for as long as 2 years…note missing….in 2 years they have not been located…..sigh

Reuters: Forty-four Afghan troops visiting the United States for military training have gone missing in less than two years, presumably in an effort to live and work illegally in America, Pentagon officials said.

Although the number of disappearances is relatively small — some 2,200 Afghan troops have received military training in the United States since 2007 — the incidents raise questions about security and screening procedures for the programs.

They are also potentially embarrassing for U.S. President Barack Obama’s administration, which has spent billions of dollars training Afghan troops as Washington seeks to extricate itself from the costly, 15-year-old war. The disclosure could fuel criticism by supporters of Republican presidential nominee Donald Trump, who has accused the Obama administration of failing to properly vet immigrants from Muslim-majority countries and has pledged a much tougher stance if he wins.

While other foreign troops on U.S. military training visits have sometimes run away, a U.S. defense official said that the frequency of Afghan troops going missing was concerning and “out of the ordinary.”

Since September alone, eight Afghan troops have left military bases without authorization, Pentagon spokesman Adam Stump told Reuters. He said the total number of Afghan troops who have gone missing since January 2015 is 44, a number that has not previously been disclosed.

“The Defense Department is assessing ways to strengthen eligibility criteria for training in ways that will reduce the likelihood of an individual Afghan willingly absconding from training in the U.S. and going AWOL (absent without leave),” Stump said.

Afghans in the U.S. training program are vetted to ensure they have not participated in human rights abuses and are not affiliated with militant groups before being allowed into the United States, Stump said.

The defense official, who spoke on condition of anonymity, added there was no evidence any of those who had absconded had carried out crimes or posed a threat to the United States. 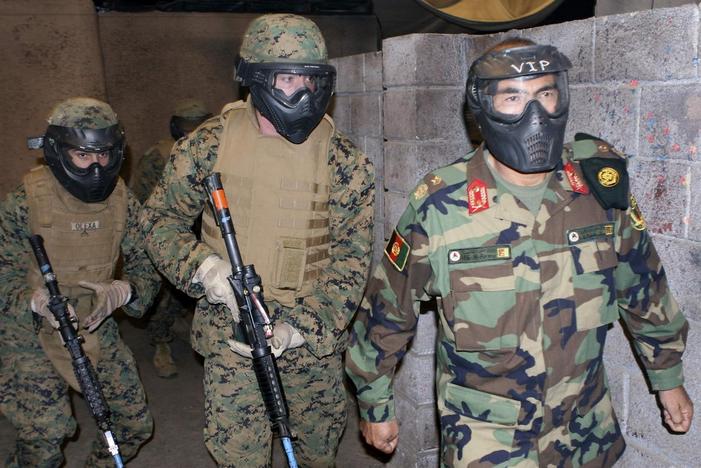 Go here for the photo collection by Reuters

The Afghan army has occasionally been infiltrated by Taliban militants who have carried out attacks on Afghan and U.S. troops, but such incidents have become less frequent due to tougher security measures.

Trump, whose other signature immigration plan is to build a wall on the U.S.-Mexico border, has proposed a temporary ban on Muslims seeking to enter the country, and has said that law enforcement officers should engage in more racial profiling to curb the threat of attacks on American soil.

After Omar Mateen, whose father was born in Afghanistan, killed 49 people at a gay nightclub in Orlando in June, Trump said an immigration ban would last until “we are in a position to properly screen these people coming into our country.”

BILLIONS OF DOLLARS IN TRAINING

Washington has allocated more than $60 billion since 2002 to train and equip Afghan troops, but security remains precarious and the Taliban are estimated to control more territory in Afghanistan than at any time since 2001 when the U.S. invaded.

Earlier this year Obama shelved plans to cut the U.S. force in Afghanistan nearly in half by year’s end, opting instead to keep 8,400 troops there through the end of his presidency in January.

The military training program brings troops to the United States from around the world in order to build on military relations and improve capabilities for joint operations.

In some cases, officials said, the Afghan students who went missing were in the United States for elite Army Ranger School and intelligence-gathering training. The officials did not identify the missing troops or their rank.

Even though the troops were in the United States for military training, they were not necessarily always on a military base.

If students under the military program are absent from training for more than 24 hours, they are considered to be “absent without leave” (AWOL) and the Department of Homeland Security is notified.

In one case the Pentagon confirmed that an Afghan student had been detained by Canadian police while attempting to enter Canada from the United States.

It was unclear how many others have been located by U.S. authorities, and the Department of Homeland Security did not immediately respond to a request for comment.

Experts said low morale and insufficient training to fight the Taliban could explain the troops leaving, in addition to a dearth of economic opportunities in the impoverished country.

“They face a formidable enemy, with very limited resources and many Afghan troops aren’t getting paid on time,” said Michael Kugelman, a South Asia specialist at the Woodrow Wilson Center, a Washington think-tank.