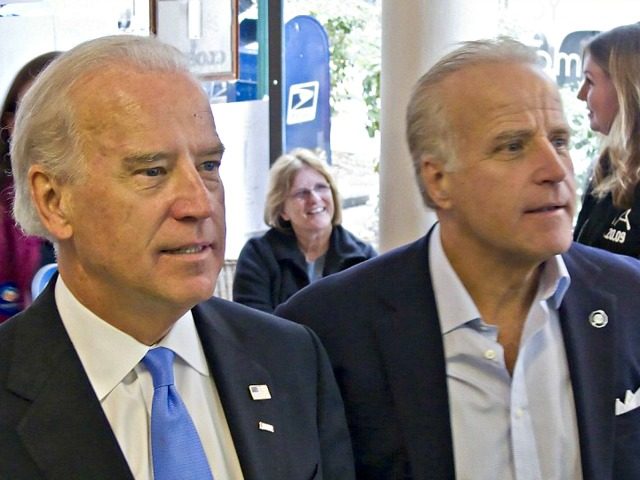 FBI got a search warrant and raided the office….

The raid of an Americore Health hospital represented a deepening of the legal morass surrounding James Biden’s recent venture into health care investing at a time when questions about the business dealings of Joe Biden’s relatives, and their alleged connection to the former vice president’s public service, continue to dog his presidential campaign.

In the weeks since the raid, two small medical firms that did business with James Biden have claimed in civil court proceedings to have obtained evidence that he may have fraudulently transferred funds from Americore “outside of the ordinary course of business,” and a former Americore executive has told POLITICO that James Biden had more than half a million dollars transferred to him from the firm as a personal loan that has not yet been repaid.

The purpose of the Jan. 30 raid of an Ellwood City, Pa., hospitalremains unclear, and there is no indication it was related to the actions of Biden’s younger brother, who has not been accused of criminal wrongdoing. Its owner, Americore, has faced legal problems and allegations of mismanagement that are unrelated to James Biden.

But recent filings in ongoing legal proceedings, along with new accounts provided to POLITICO by former executives of Americore and others, point to potential pitfalls for the former vice president, painting the fullest picture to date of James Biden’s health care dealings and the ways in which they allegedly related to his older brother. In 2017 and 2018, James Biden was embarking on a foray into health care investing, telling potential partners, including at Americore, that his last name could open doors and that Joe Biden was excited about the public policy implications of their business models, according to court filings and interviews with James’ former business contacts.

Tom Pritchard, a former Americore executive familiar with the business’ finances, told POLITICO that James Biden’s arrival exacerbated Americore’s financial problems. Holding out the promise of a large investment from the Middle East based on his political connections, James Biden introduced Americore’s founder to his older brother and helped land a bridge loan to Americore from a hedge fund, Pritchard said. But then, Pritchard said, James Biden received a six-figure personal loan out of Americore’s coffers while encouraging the firm to take on greater financial liabilities. The cash infusion from the Middle East never arrived, and, Pritchard says, James Biden has not paid back the loan, the terms of which are unknown.

“It was all smoke and mirrors,” Pritchard said.

Meanwhile, Americore found itself increasingly hamstrung by high-interest loans and unable to pay employees and vendors, a situation that disrupted the operations of the rural hospitals it owns.

Now, the business is in bankruptcy court, and federal authorities are circling.

A Biden campaign official said that Joe Biden never discussed Americore with his brother or expressed support for the business. The official said that Americore’s founder, Grant White, purchased a ticket to a September 2017 fundraiser for the Beau Biden Foundation, an event attended by Joe Biden. “If the two interacted in any way, it would have been a handshake and nothing more,” the official said.

The messy politics surrounding the business dealings of Biden’s relatives, and President Donald Trump’s efforts to exploit them, have loomed over the presidential contest for several months, damaging both camps. Trump’s failed attempts to pressure Ukraine’s government to announce an investigation of Biden and his son, Hunter, led to Trump’s impeachment. Though Trump was acquitted by the Republican-controlled Senate, polls showed that a plurality of Americans consistently supported the impeachment, which highlighted evidence that Trump abused his power for partisan political ends. At the same time, a recent POLITICO/Morning Consult poll found that 57 percent of voters believe Hunter Biden’s well-compensated position on the board of a Ukrainian energy firm amounted to a scandal, compared to 19 percent who do not.

Over the course of Biden’s run, reports have trickled out about James, a sometimes business partner of Hunter’s, who has received financial support from people with an interest in influencing Joe and been repeatedly accused of trading on Joe’s clout to advance his business ventures.

Biden has defended his son Hunter and said that his relatives’ business dealings have had no connection to his official duties. But the recent developments related to James Biden’s health care ventures demonstrate that as long as Biden remains in the campaign, the issue of his relatives’ financial dealings is likely to remain as well.

Even before the development surrounding Americore, James Biden’s venture into health care investing has been surrounded by legal allegations and claims that he invoked his brother’s clout.

Last year, two medical services firms jointly sued James Biden and his business partners in federal court in Tennessee, alleging James and his partners promised to provide a large investment from the Middle East, then pushed the firms to make expensive acquisitions, as part of a scheme to drive them out of business and steal their business models. As previously reported, those firms alleged that James Biden cited his family’s political connections and promised his older brother would promote their health care model as part of his 2020 presidential campaign.

Another health care firm sued Platinum Global Partners — a Florida corporation that lists James and his wife Sara as managers — in Palm Beach County in June. The firm, which makes an oral rinse with applications for cancer patients, alleged that Platinum reneged on an agreement to invest in it and requested that Platinum turn over documents related to the Biden Cancer Initiative, a nonprofit founded by Joe Biden to fund medical research. An executive involved in litigation against James Biden previously told POLITICO that, on a call, James said he could get the Biden Cancer Initiative to promote the oral rinse.

The Tennessee case is ongoing. The Palm Beach County case was dismissed without prejudice in November.

James Biden and his partners have denied the central allegations in both cases.

But, in interviews, former executives of Americore offered additional, similar accounts of James Biden invoking his brother’s influence and the promise of investment funds from the Middle East that never materialized in order to push their firm to grow quickly, taking on new financial liabilities.

Unlike those other firms, Americore is now in the sights of the Justice Department.

The precise nature of James Biden’s relationship to the firm — founded by White, a Canadian investment banker, in 2017— is contested.

The plaintiffs in the Tennessee case described him as a principal of Americore and entered a business card identifying him as such into evidence. James Biden has disputed that he is a principal of the firm in court proceedings, though he has not detailed the precise nature of his ties to Americore,which owns hospitals in Pennsylvania, Arkansas and Missouri.

Pritchard and the other former Americore executive, who spoke on condition of anonymity out of fear of retaliation, each said James Biden was actively involved in the company during their tenures there. “Jim was operating as a principal or Jim was portraying that,” Pritchard said. “Whether on paper he had any ownership, I’m not 100 percent sure.”

A former employee at Pineville Community Hospital in southeastern Kentucky, which was acquired by Americore in 2017, said she got the impression that James Biden was in a top leadership role at Americore when he visited the facility and introduced himself in early 2018.

The other former Americore executive — who left the firm after less than a year over concerns about its business practices that were unrelated to James Biden — recalled that James spoke regularly of the ways in which Joe Biden’s presidential aspirations could benefit the firm, and vice versa. “His brother was very interested in rural health care and very interested in veterans’ health care, and it was something he really wanted to get behind,” the former executive recalled James Biden saying. “This would help his brother get elected if it were to take off and go.”

Both former executives recalled James Biden said he would help facilitate a multimillion-dollar investment from the Middle East.

Pritchard said the exact source of the funds was never made clear to him. “That linkage was supposed to come via Jim Biden via whatever influence he had through his brother in the Middle East,” said the other former executive, who worked for Americore in 2018.

The plaintiffs in the Tennessee case allege James Biden and his partners aimed to solicit investments from the state-owned Qatar Investment Authority and met in West Palm Beach with representatives of the Turkish conglomerate Dogan Holding. James Biden and his co-defendants denied the allegation about the Qatar Investment Authority and acknowledged meeting with Dogan.

The former executives also said that James Biden began to set up an office on the second floor of Americore’s headquarters in Fort Lauderdale, Fla. “It was like a little shrine to him and his brother and [former President Barack] Obama,” recalled Pritchard, who said he clashed with James Biden over James’ requests to be reimbursed for pricey furniture for the office.

The other former executive said that when he saw the office, several framed photos of the Biden brothers and foreign dignitaries sat on the floor, ready to be hung on the walls.

But Pritchard said he learned that after Americore received the bridge loan, it made a six-figure loan to James Biden for his personal use.

Lewitt declined to comment, but referred to a letter he sent the Ellwood City Ledger blaming White’s alleged use of high-interest loans for Americore’s problems and vowing to restore the firm’s finances and operations.

Several Americore entities are currently in the midst of federal bankruptcy proceedings, providing a glimpse into their finances.In February, one of those entities, Americore Health LLC, filed a schedule of assets that included $650,000 due to accounts receivable. Pritchard said that figure referred to the loan repayment owed by James Biden.

Pritchard said that after James Biden received his loan payment from Americore, James reduced his involvement with the firm as its financial difficulties mounted.

“Jim needed to lay low because his brother was possibly running for president, and he didn’t need any bad press,” Pritchard recalled, saying that after James stepped back, Lewitt asked to review Americore corporate documents to ensure they did not bear James’ name.

The other former executive said that not long after he first saw the office being set up for James Biden in mid-2018, the office was emptied out.