The real hurt and consequence is Ukraine as you read on.

The Biden administration has waived sanctions on a company building a controversial gas pipeline between Russia and Germany.

The US also lifted sanctions on the executive – an ally of Russia’s Vladimir Putin – who leads the firm behind the Nord Stream 2 project.

The move came in a report on Russian sanctions delivered to Congress by the Department of State.

Critics say the pipeline is a major geopolitical prize for the Kremlin.

The project, which would take gas from the Russian Arctic under the Baltic Sea to Germany, is already more than 95% complete. 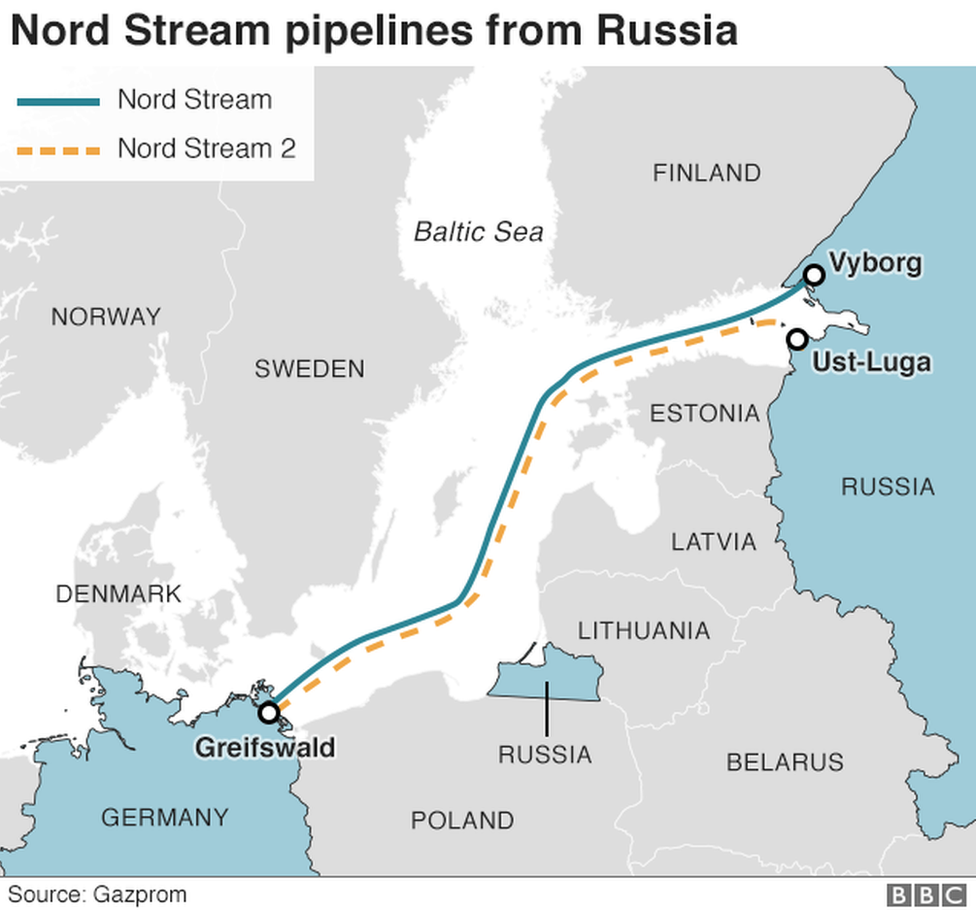 How it bypasses Ukraine further putting Ukraine into a financial crisis –>

But it concludes that it is in the US national interest to waive the sanctions.

The Department of State also imposed sanctions on four Russian ships involved in the building of Nord Stream 2, though detractors said that would not be enough to stop the pipeline.

Ukrainians breathed a collective sigh of relief last month when Russian President Vladimir Putin said he would withdraw the majority of more than 100,000 troops that had been shifted to the Russian-Ukrainian border. So did the U.S., NATO and the rest of Europe.

But nobody should be breathing easy: Putin isn’t one to stay on the retreat. So, where should we expect his next provocation? Very likely, the waters of the Black Sea.

Russia invaded Ukraine in 2014 and carved off the strategically vital peninsula of Crimea, the largest land grab from a sovereign state in this century. Since then, he has supplied money, training, arms and military advisers to separatist forces in the Donbas region of southeast Ukraine.

The recent buildup was probably a signal to the West of how relentless Putin will be on pressuring Ukraine, and of his deep opposition to it joining the North Atlantic Treaty Organization. It was also a distraction from his persecution of opposition leader Alexey Navalny, and played well with Putin’s base in Russia, where his approval rating soared during the Crimea annexation. Finally, the buildup allowed the Russian military a pretty effective practice run, in case Putin does decide to roll the dice and invade across the border.

Although one should never underestimate Putin’s ability to surprise his geopolitical rivals, this doesn’t seem like the moment for a full-blown land incursion. Putin is already financially overextended with his overseas adventures. Reconstructing Syria will come with a huge bill. Support to Ukrainian separatists is expensive. He has a great appetite for expensive new weapons (militarizing space, for example). And he remains under significant sanctions from the West. source

Seems President Biden got the lobby memo to support Moscow.

OS: Biden has not made any moves that would prevent completion of the pipeline, which would transfer natural gas from Russia to Germany while bypassing Poland and Ukraine. That’s a win for both Berlin and Moscow. It’s also a win for Washington lobbyists.

Companies involved with the pipeline spent more than $1 million lobbying on sanctions and other issues related to the project through the first three months of 2021.

Other foreign firms are also dispatching lobbyists to advocate for the pipeline. Five foreign companies partnering on the project — Austria’s OMV AG, the Netherlands’ Shell International, France’s ENGIE, and Germany’s Wintershall and Uniper SE — hired lobbyists at McLarty Inbound to lobby the State Department and the National Security Council. They collectively paid the firm more than $840,000 for lobbying in 2020 and $210,000 in the first quarter of 2021.

McLarty managing partner Richard Burt, the former U.S. Ambassador to West Germany and a member of several influential Washington think-tanks, reported lobbying for a slate of foreign companies that have partnered on the project on “Russian sanctions issues” and “natural gas as an element of European energy security.” Burt donated $2,000 to Biden’s 2020 campaign and $10,000 to pro-Biden super PAC Unite the Country while he was a registered lobbyist for foreign companies partnering with Nord Stream on the pipeline. Biden’s campaign had not refunded Burt’s money at the time of publication, more than 6 months after the donations were given, despite pledging to reject lobbyist donations.

Because firms working for proponents of the pipeline registered under the Lobbying Disclosure Act instead of the Foreign Agents Registration Act, details of which government officials the lobbyists met with remain hidden from the public.

Lobbyists for private entities that would otherwise be required to follow FARA disclosure requirements may choose to instead register under the LDA with the House Clerk’s Office and Secretary of the Senate so long as the “principal beneficiary” of the influence operation is not a foreign government or political party. Nord Stream is owned by a Russian state-run firm, but the Kremlin has insisted the pipeline is a “commercial project.”