The Russian delegation was sitting 3 chairs away from Ambassador Nikki Haley as she slammed Russia for their actions against Britain including the use of poison and the disdainful response by Putin towards Prime Minister Terresa May.

See the secret trial of the chemical weapon from Russia here.

As PM May expels almost 2 dozen Russian diplomats, actually they are spies, one wonders if Britain knew they were in country why they were not expelled previously. A theory has developed that Russian operatives applied the nerve agent, Novachok to the door handles of Skripal’s car. There was the case of the poison telephone:

Accounts of security deficiencies at weapons facilities indicate that, at least for a period in the 1990s, Moscow was not in firm control of its chemical weapons stockpiles or the people guarding them.

When Russian banking magnate Ivan Kivelidi and his secretary died in 1995 from organ failure after a military-grade poison was found on the telephone receiver of his Moscow office, an employee of a state chemical research institute confessed to having secretly supplied the toxin.

In a closed-door trial, Kivelidi’s business partner was convicted of poisoning Kivelidi over a dispute. At the trial, prosecutors said the business partner had obtained the poison, via several intermediaries, from Leonard Rink, an employee of a state chemical research institute known as GosNIIOKhT. 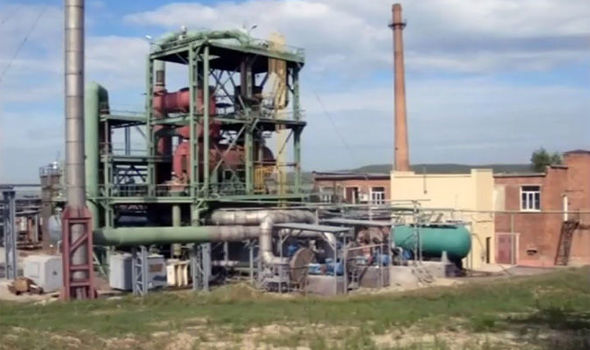 The same institute, according to Vil Mirzayanov, a Soviet chemical weapons scientist who later turned whistleblower, was part of the state chemical weapons programme and helped develop the “Novichok” family of nerve agents that Britain has said was responsible for poisoning Skripal. More here.

BRITAIN today ordered 23 Russian spooks to leave the country within a week in response to the spy poisoning scandal.

Theresa May told MPs that two dozen so-called diplomats who are in fact spies will be kicked out in a bid to stop Vladimir Putin meddling in Britain.

The PM said Russia had shown “contempt and defiance” in the aftermath of an attempt to kill ex-spy Sergei Skripal and warned that the poisoning represented “the unlawful use of force by Russia against the United Kingdom”.

She also confirmed that no ministers or members of the Royal Family will attend this summer’s World Cup in Russia – but stopped short of calling on the England team to pull out of the tournament.

But Jeremy Corbyn sparked anger when he suggested that Russia might NOT be behind the attack and compared the investigation to claims about Saddam Hussein’s WMDs.

Mrs May also announced this afternoon:

The expulsion of 23 Russian spies is the toughest act of its kind for 30 years – and will almost certainly spark a tit-for-tat diplomatic war, with British diplomats likely to be kicked out of Moscow.

Mrs May told the House of Commons: “To those who seek to do us harm, our message is clear – you are not welcome here.”

Blasting Putin’s refusal to respond to her demand for an explanation, the PM said: “It was right to offer Russia the opportunity to provide an explanation.

“But their response has demonstrated complete disdain for the gravity of these events. They have provided no credible explanation that could suggest they lost control of their nerve agent.

“Instead they have treated the use of a military grade nerve agent in Europe with sarcasm, contempt and defiance.

“There is no alternative conclusion other than that the Russian state was culpable for the attempted murder of Mr Skripal and his daughter – and for threatening the lives of other British citizens in Salisbury, including Detective Sergeant Nick Bailey.

“This represents an unlawful use of force by the Russian State against the United Kingdom.”

What we know so far:

Any Russian spies who try to re-enter Britain will now be stopped at the border in the same way as terror suspects, the PM said.

She announced that sanctions on human rights violators will be stepped up, and vowed to freeze the assets of the Russian regime if they are being used to meddle in the UK.

Mrs May added: “We will continue to bring all the capabilities of UK law enforcement to bear against serious criminals and corrupt elites. There is no place for these people – or their money – in our country.”

Foreign minister Sergei Lavrov, who was due to visit Britain shortly, has had his invitation withdrawn, she announced.

The PM said: “I continue to believe it is not in our national interest to break off all dialogue between the United Kingdom and the Russian Federation.

“But in the aftermath of this appalling act against our country, this relationship cannot be the same.”

And she warned Putin that Britain will not stand alone, revealing that Donald Trump, Emmanuel Macron and Angela Merkel have promised to present a united front against Russian atrocities.

But Jeremy Corbyn caused fury by immediately taking political potshots, as he brought up cuts to our diplomatic capability.

He also said he agreed with Russia that we should hand over a sample of the nerve agent used to them too.

The leftie Labour boss was heckled by Tory MPs as he suggested we should maintain a “robust dialogue” with Russia.

And he used his comments to snipe at Foreign Secretary Boris Johnson, saying he was “demeaning” his office.

Mrs May lashed out at Labour for refusing to join together with the Government in a time of national crisis.

“They could have taken the opportunity to condemn the culpability of the Russian state,” she stormed.

And Mr Corbyn’s own MPs joined the anger as they pledged support for the Prime Minister’s actions.

But some Labour supporters claim the attack on Mr Skripal was a “false flag” designed to damage the party leader, The Sun revealed today.

The Russian embassy in London responded to Mrs May’s statement with fury, saying: “We consider this hostile action as totally unacceptable, unjustified and shortsighted.

“All the responsibility for the deterioration of the Russia-UK relationship lies with the current political leadership of Britain.”

After today’s escalation of hostilities, Brits visiting Russia were warned they must avoid talking publically about politics in case they attract the regime’s attention.

The Foreign Office updated its travel advice for the country, telling tourists they could face “anti-British sentiment or harassment”.

The Russian regime has refused to explain its role in the attempted hit  – saying it will take at least ten days to respond to the PM’s ultimatum.

And ambassador Alexander Yakovenko went further today, saying: “Everything done today is absolutely unacceptable and we consider this a provocation.

“The UK should follow international law. They have to present the request to the organisation and we are happy to consider this within the ten days.

“We believe this is a very serious provocation and of course we are not ready to talk.”

It has emerged that police are looking for a mysterious couple who may be witnesses to the attack on Mr Skripal and his daughter while the investigation has widened from Salisbury to Gillingham.

The PM set Russia a deadline of midnight last night to explain how nerve agent novichok came to be used in the brazen attack – but the regime responded by taunting Britain and boasting about its nuclear arsenal.

Mrs May held a meeting of the National Security Council this morning, before returning to the Commons to outline the next steps in the campaign to punish Russia for the assassination attempt.

Britain has also called for an emergency meeting of the UN Security Council in a bid to hold the regime to account, while the UK’s Nato allies pledged to stand firm alongside us.

This morning Sergei Lavrov, the Russian foreign minister, made the bizarre claim that Russia hasn’t actually received a formal request for information from the UK.

He said Putin’s government would take ten days to respond once the official message is received.