The United States joins the Libyan people as they celebrate liberation from more than four decades of Qadhafi’s brutal dictatorship. The Libyan revolution was the work of ordinary, brave Libyans who demanded their freedoms and dignity. The United States is proud to have supported them in those efforts and we are committed to their future.

This is a historic moment, but much work remains to be done. The process of forming a new representative government that is accountable to its people must reflect the same spirit of the revolution and the Transitional National Council should work to announce this government as soon as possible. The transitional authorities can build on this movement by promoting reconciliation and respect for human rights across Libyan society, while helping to prevent reprisals and ensuring the justice and due process that the Libyan people expect and deserve.

The path to democracy is a long-term process that requires the participation of all Libyans. Just as the Libyan people led the revolution, they will also lead the process of transition and government formation. The United States remains deeply committed to the Libyan people who can now look forward to a new era of freedom, dignity, and security.

Below is just a sampling of what is found at the State Department.

Bureau of Population, Refugees, and Migration

Senior Department leaders, through engagement in a variety of public outreach and media  appearances, reminded listeners of America’s history as a land comprising those escaping persecution, seeking safety together through a common identity as Americans and having a history of compassion toward those needing help. Secretary Kerry met that day with six Department of State employees who were refugees themselves, or the children of refugees, to hear of the circumstances that brought them to the United States, and of their resulting public service. They spoke of how their personal histories led them to serve the nation. Kerry told the group that some in the United States are trying “to make a negative out of being a refugee or somehow turn people who are refugees into threats.” He noted that each of the group’s members is “contributing enormously to the work of this department, to the fiber of our country… and they have a story to tell about how America keeps faith with people’s dreams and hopes and aspirations.”

Later, Kerry participated in the day’s largest event, an interfaith iftar (the evening meal served during Ramadan) organized by the Office of the Special Representative for Religious Engagement (S/RGA). 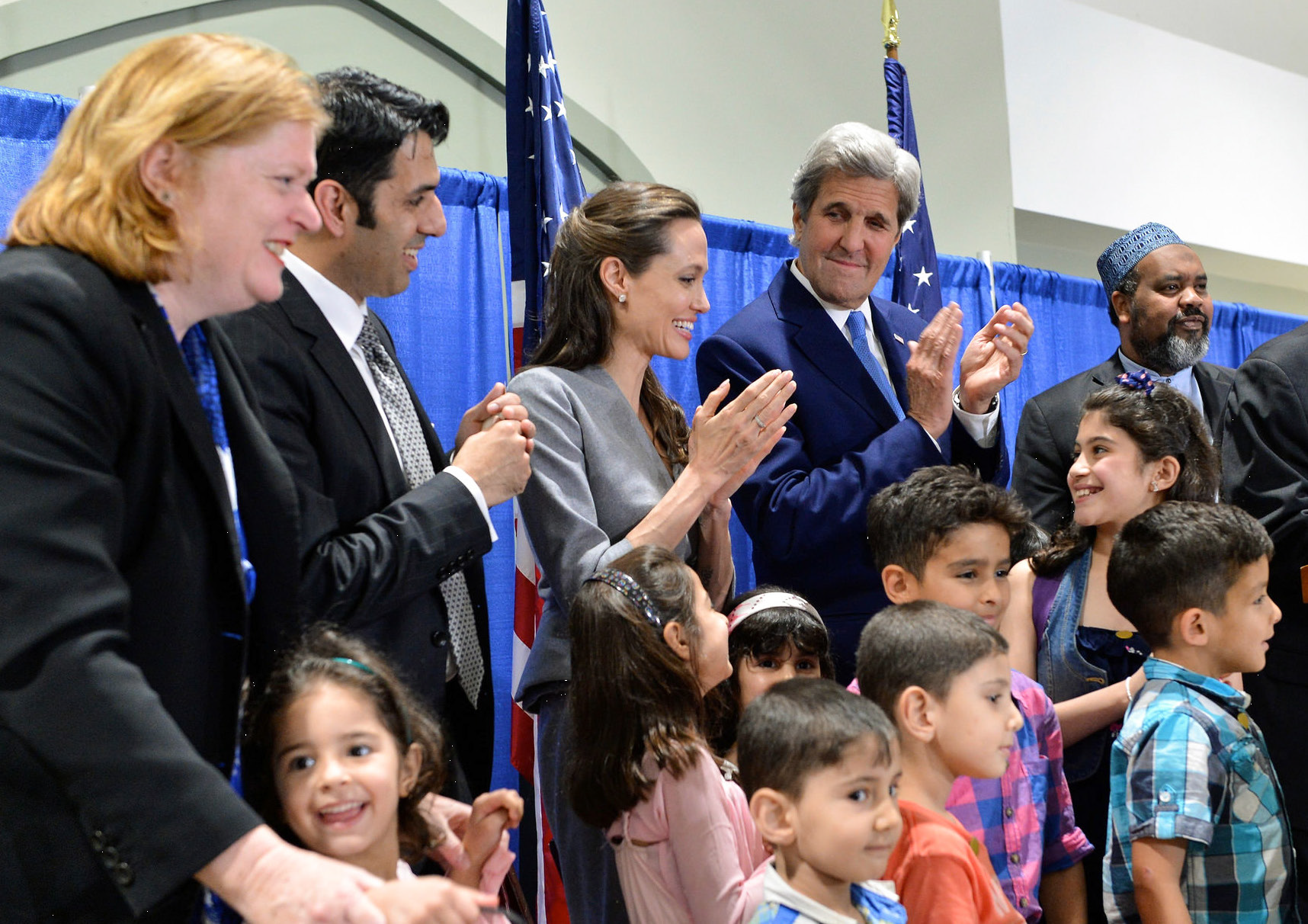 There, he joined Assistant Secretary Richard, the Department’s Special Representative to Muslim Communities Shaarik Zafar and U.N. High Commission for Refugees Special Envoy Angelina Jolie Pitt to meet with a small group of refugees, refugee assistance organizations and religious leaders to hear about their experiences. He said “a huge effort is being made to respond to this [refugee] crisis, but I have to tell you, my friends, all of our efforts still fall short of the need. Every nation, every sector, every individual has a responsibility to try to do more.”

Jolie Pitt spoke against the negative rhetoric directed at Muslims— including refugees and said, “When we discriminate, when we imply with our actions that some lives are worth more than others, or when we denigrate the faith, traditions and cultures of any group of people, we weaken our strength in democratic societies.”

Hillary started it and John Kerry continues the program:

This week, HRC submitted comments in response to the U.S. State Department’s request for feedback on improving the U.S. Refugee Admissions Program (USRAP), which is responsible for helping refugees resettle in the United States. While USRAP has made tremendous strides in recent years to help meet the unique needs of LGBT refugees, a great deal more can be done.

The number of refugees worldwide who are fleeing their homeland because of violence and discrimination remains at historic and tragically high levels.

“From discrimination and bullying to violence and murder, LGBT people are among the most vulnerable individuals in the world,” wrote HRC Government Affairs Director David Stacy. “It is therefore essential that the United States continue to serve as a beacon of hope and safety for all people who face persecution, no matter who they are or whom they love.”

In its comments, HRC urged the State Department to collect more data on the number of LGBT refugees entering the U.S. in order to identify solutions that will better meet their needs in the applicable process. The comments also recommended that the federal government place LGBT refugees in communities that have appropriate support and services for LGBT people, as well as provide cultural competency training for individuals who work with LGBT refugees in order to help combat discrimination and harassment that some LGBT refugees face. HRC also urged the State Department to create more avenues to allow individuals to be reunited with same-sex partners who are already resettled in the U.S.

HRC will continue to advocate for the needs of LGBT refugees, beginning with a summit that HRC will host on June 9, 2016. The convening will focus on developing strategies to help LGBT refugees who are fleeing in mass numbers from areas that are in and around territory that is controlled by the Islamic State.

Central America’s Northern Triangle countries have much to offer. El Salvador,
Guatemala and Honduras each feature their own distinct cultural highlights, unique sights, beautiful scenery and local culinary specialties, and each country provides an unparalleled professional opportunity to do interesting, challenging work at a pivotal moment in history.
In late 2014, President Obama launched the U.S. Strategy for Engagement in Central
America. Simply put, the strategy changes how we work in the region. It seeks to resolve the underlying conditions that drive undocumented migration to the United States by comprehensively promoting prosperity, good governance and security throughout Central America, but most especially in El Salvador, Guatemala and Honduras. The strategy uses a cross-cutting, multidisciplinary approach, known as place-based strategy, to address the core problems that are plaguing the region. The Northern Triangle countries are also investing heavily in their own recovery, putting $3 billion of their own resources into the Alliance for Prosperity, their own regional plan for improvement. Our strategy dovetails with the Alliance for Prosperity. The result is an unprecedented synergy between U.S. foreign assistance and host government investment in the region, with a shared goal of effecting lasting change.
On the security piece, the strategy recognizes that violence doesn’t exist in a vacuum. It therefore seeks to resolve the primary issues underlying the violence. For this reason, in Honduras, a country where the average person has only about seven years of education, the U.S. government is working with Honduran government and NGO partners to develop programs that educate at-risk youth and provide long-term, formal employment options as solid alternatives to gangs and criminal behavior. We are already seeing significant reductions in the number of homicides in target neighborhoods.

El Salvador, where extortion is crushing businesses of all sizes, we are effectively addressing the impunity problem. We have partnered with the government to create an anti-extortion task force to eradicate this scourge. The task force’s work has resulted in more than 75 convictions, and more than 200 additional people are awaiting trial, with a 96 percent conviction rate since 2014 and not a single case dismissed before trial—unusual in El Salvador, where many cases are thrown out for purported lack of evidence and witnesses often recant out of fear of reprisal. It is just one example of the type of transformative opportunities we have witnessed while undertaking critical prosperity-enhancing work in the region.
We promote good governance and rule of law in Guatemala through support for the International Commission Against Impunity in Guatemala (commonly known by its Spanish acronym, CICIG), as well as by creating 24-hour courts to deal with all forms of crime, especially domestic violence; a new asset seizure chamber that is capturing ill-gotten gains for law enforcement purposes; and a so-called “high impact” court with sufficient security so that the highest-profile criminal cases can be expeditiously tried. As you’ll read in the story about Guatemala, CICIG and the Public Ministry are leading the charge against impunity. More than 200 public officials have been charged with crimes, including the former president and vice president. Our investments are paying dividends: 73 percent of Guatemalans are familiar with the tribunal’s work, 95 percent of that group believe CICIG is doing a good job, and 88 percent of Guatemalans believe the Public Ministry is doing a good job.
These and many more opportunities to have a positive impact on the future of each of these countries await officers in WHA. We are just getting started on our work under the strategy. You can make a difference in this region. There is much work to be done. We hope you will consider joining us in 2016 and beyond.

(How do you impact the climate in places like the Marshall Islands?)

There is much more but several issues have been deleted from the State Department website.