Click this link to see the video of the new detention facilities.

Now after watching that video we see how the Border Patrol cant do their real job and the need for the military supplementing surveillance and security.

The Trump administration wants to open two new tent facilities to temporarily detain up to 1,000 parents and children near the southern border, as advocates sharply criticize the conditions inside the tents already used to hold migrants.

U.S. Customs and Border Protection said in a notice to potential contractors that it wants to house 500 people in each camp in El Paso, Texas, and in the South Texas city of Donna, which has a border crossing with Mexico.

Each facility would consist of one large tent that could be divided into sections by gender and between families and children traveling alone, according to the notice. Detainees would sleep on mats. There would also be laundry facilities, showers, and an “additional fenced-in area” for “outside exercise/recreation.”

The notice says the facilities could open in the next two weeks and operate through year end, with a cost that could reach $37 million.

But the agency has said its resources are strained by the sharp rise in the numbers of parents and children crossing the border and requesting asylum. It made 53,000 apprehensions in March of parents and children traveling together, most of whom say they are fleeing violence and poverty in Central America. Many ultimately request asylum under U.S. and international law. 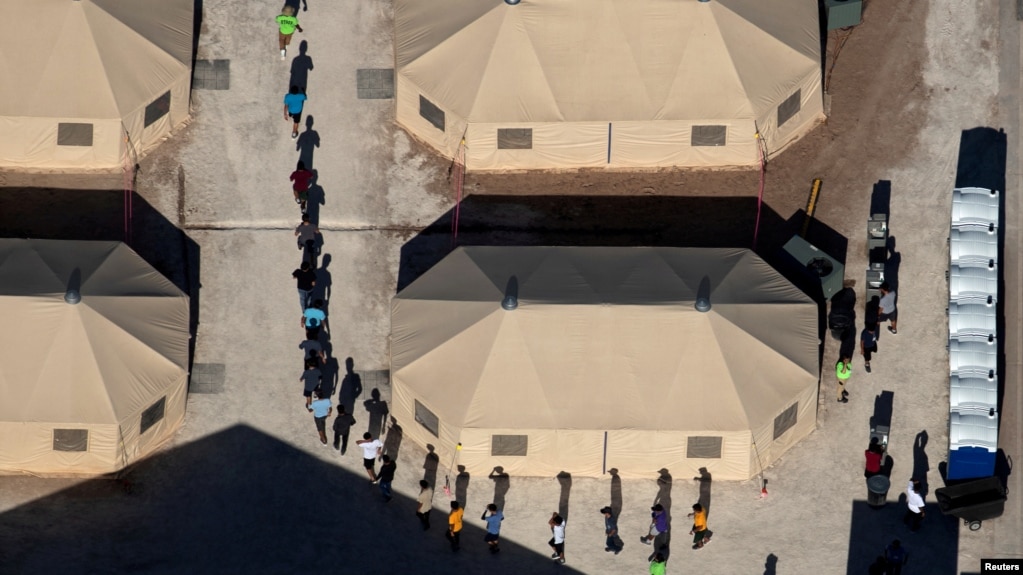 Immigrant children are led by staff in single file between tents at a detention facility next to the Mexican border in Tornillo, Texas, June 18, 2018.

In a statement Tuesday, CBP said it urgently needed additional space for detention and processing.

“CBP is committed to finding solutions that address the current border security and humanitarian crisis at the southwest border in a way that safeguards those in our custody in a humane and dignified manner,” the statement said.

The Border Patrol has started directly releasing parents and children instead of referring them to immigration authorities for potential long-term detention, but families still sometimes wait several days to be processed by the agency and released.

Land near the bridge in Donna was used last year as a camp by active-duty soldiers when they were ordered to South Texas’ Rio Grande Valley.

The Border Patrol also established a tent facility at Donna to hold migrants in December 2016, in the last weeks of the administration of former President Barack Obama, in response to a previous surge of migrants from Central America.

Sister Norma Pimentel, executive director of Catholic Charities of the Rio Grande Valley, said she had been allowed to visit the tent facility in 2016. She said that facility had been “open and clean,” but noted she visited before it began detaining people.

“Detention is never a good idea for any family,” Pimentel said. “I believe families are victims of a lot of abuse, and we just add to that abuse by the way we respond to handle and process them.”