Hey President Trump, fire Brett McGurk. Qassem Suleimani has been declared a terrorist and has countless sanctions, why is he allowed to travel including 3 trips to Moscow?

Why is the United States neutral?

Kirkuk, home to some 1 million Arabs, Kurds, Turkmen and Christians, has been at the heart of a long-running dispute between the autonomous Kurdish region and the central government in Baghdad. Both are close allies of the U.S. There are 35 million Kurds in 4 countries, they are essentially stateless….McMaster, you out there? What say you?

On Sunday, Qassem Suleimani, Iran’s chief spymaster, travelled to the Iraqi city of Sulaimaniya to meet with the leaders of the Patriotic Union of Kurdistan, or P.U.K., one of the two main Kurdish political parties. For years, the P.U.K. and its sister party, the Kurdish Democratic Party, or K.D.P., have been struggling to break away from the rest of Iraq and form an independent state. A Kurdish republic is opposed by all the region’s countries—the governments in Baghdad, Turkey, and Iran—which fear that sizable Kurdish minorities in all three nations will begin to act autonomously.

It is not known what Suleimani—the Middle East’s most cunning operative—told the P.U.K.’s leaders. But, within hours, their fighters began abandoning their posts, making way for Iraqi military units just across the front lines. Not long after, Iraqi forces took over the former Kurdish positions and a stretch of oil fields near the city of Kirkuk. With the Iraqi Kurds now split in two—the P.U.K. on one side and the K.D.P. on the other—hopes for an independent Kurdish state appear to be fading fast. “It was a horrible, horrible betrayal,” a senior official in the Kurdish Regional Government told me.

“Everyone is calling it the P.U.K. drug deal,” a former senior American official who works in the region told me. Notably, many P.U.K. units refused the order to stand down and fought the oncoming Iraqi units.

Last week, Iraqi military units began massing near the Kurdish-Iraqi border. The Iraqi units are dominated by “popular mobilization forces,” which is another way of saying Iranian-trained militias that operate inside Iraq. Those militias—controlled by Suleimani—are staunch backers of the Shiite-led government of Prime Minister Haider al-Abadi, in Baghdad. Most of these groups have dark pasts; the main militia that moved into Kurdish territory this morning was Asa’ib Ahl al-Haq, which battled American soldiers in Iraq during the war there. Its leader, Qais Khazali, is believed to be the principal planner of the kidnapping and execution of four American soldiers in Karbala in 2007. The military operation in the Kurdish region is very much a joint Iraq-Iran project; the flag of Asa’ib Ahl al-Haq was planted at one of the Kurdish bases that was taken over. Also accompanying Iraqi forces in Kirkuk was Abu Mahdi al-Muhandis, an Iraqi militia commander convicted of bombing the American Embassy in Kuwait in 1983; he has been designated a terrorist by the United States government. More here from NYT’s. 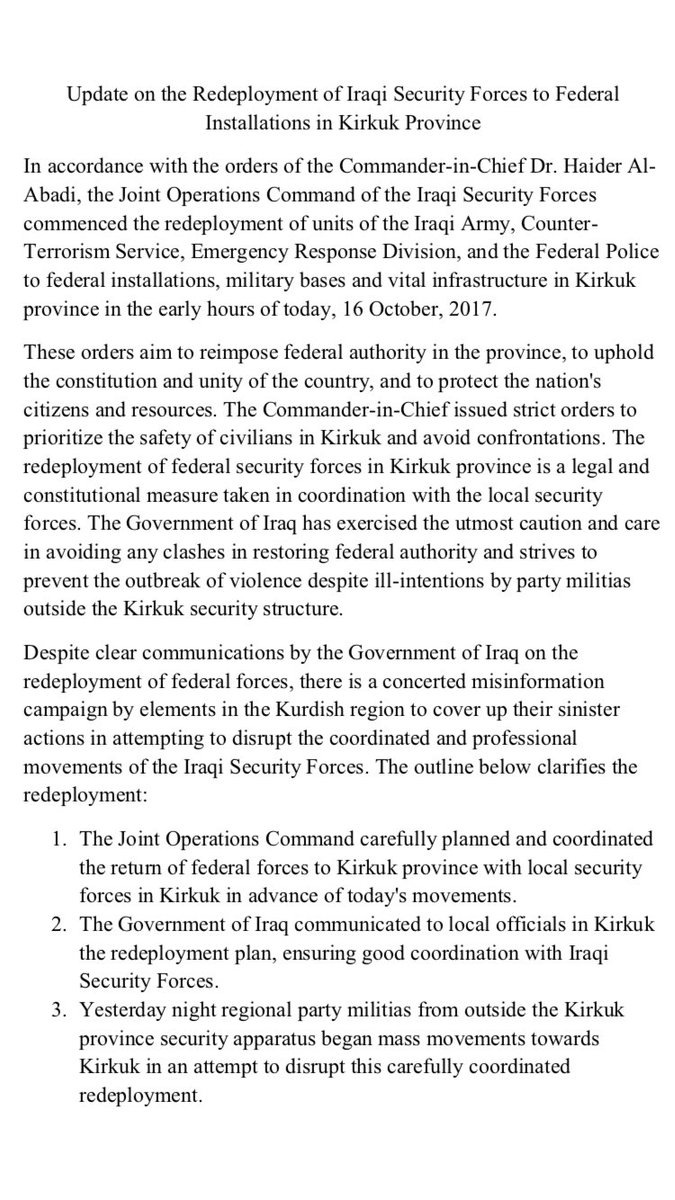 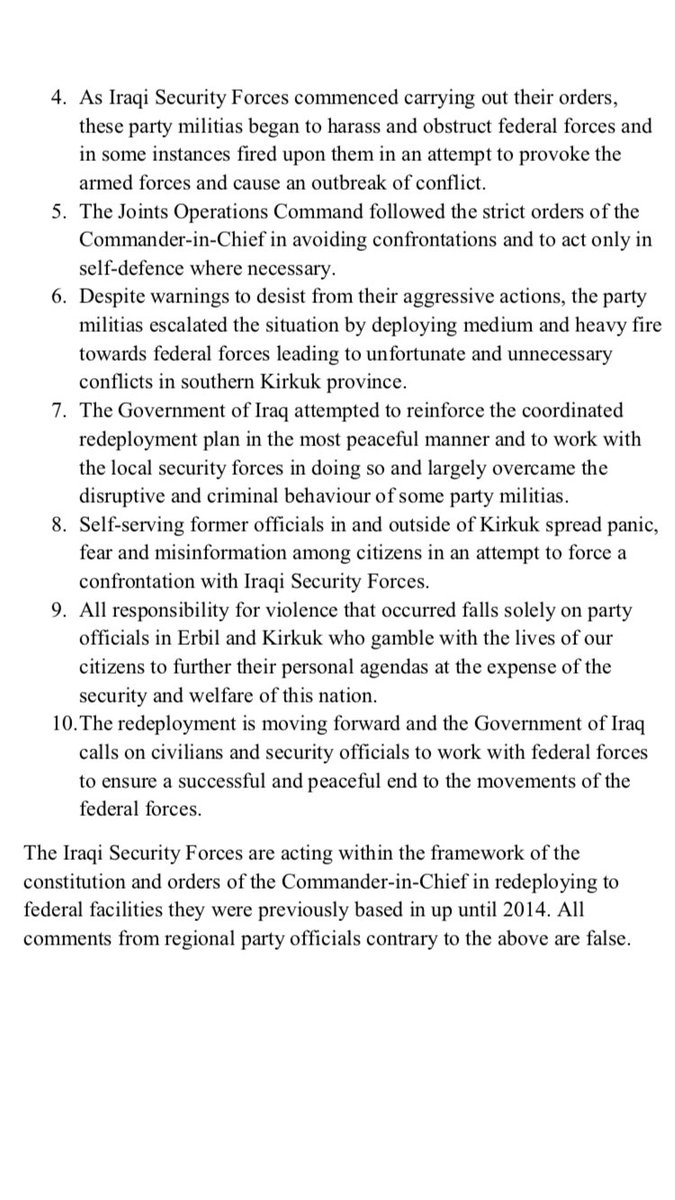 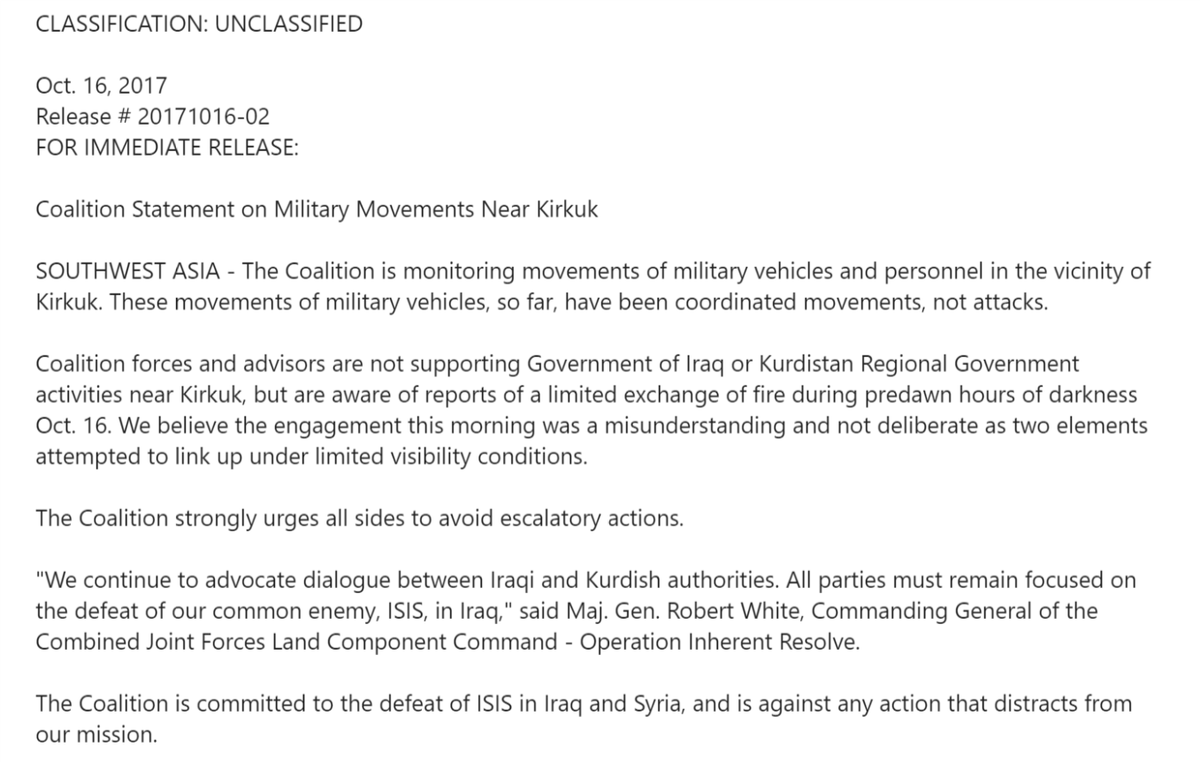 How bad was it and where does this go for the Kurds?

The game of brinkmanship blew up in the faces of Baghdad and Irbil on October 16 as talks gave way to fighting in south Kirkuk and Tuz Kharmato in Salahaddin.

At the start of October 15, the central and Kurdish regional governments were in the middle of heavy talks to resolve the crisis in Kirkuk. The problem started when Prime Minister Haidar Abadi mobilized the joint forces and demanded that the Kurds withdraw from areas they occupied in 2014 including several military bases, an airport and the Bai Hassan and Avana oil fields in southern Kirkuk. Baghdad demanded that the Kurds abide by the constitution and cancel the results of the September independence referendum. It also accused the Kurds of moving in fighters from the Turkey’s Kurdistan Workers’ Party (PKK) into Kirkuk in a bald attempt to get Ankara more involved in the dispute. The Kurdistan Regional Government (KRG) rejected those calls as the Kurdistan Democratic Party (KDP) and Patriotic Union of Kurdistan (PUK) met in Dokan. Talks were held there because the KDP and PUK were so far apart on this crisis. The KDP has been steadfast in rejecting any terms set by Baghdad. It has also been beating the war drum accusing the Abadi government of acting like the Baath and constantly warning that the federal government was going to attack Kirkuk. The PUK on the other hand is divided. Many in the party’s leadership are open to making compromises, but others such as Kirkuk Governor Najmaldin Karim and Vice President Kosrat Rasul are siding with the KDP and calling for a defense of Kirkuk. Iranian General Qasim Suleimani of the Quds Force was also in Kurdistan, while America’s Brett McGurk arrived in Baghdad, both trying to mediate. There were reports on social media that the PUK had made a local deal to allow the federal forces into certain areas of the province, but that broke down and fighting ensued.

There were clashes in both southern Kirkuk and Tuz Kharmato in Salahaddin. First, the government had given the Peshmerga until October 15 to withdraw from several positions in Kirkuk. That expired, and talks were still going on between both sides. On October 16, the Golden Division, the army’s 9th Division, and Federal Police began advancing along two axes from Dibis in the west and Hawija in the south towards the K1 military base and the Bai Hassan and Avana oil fields. When the Golden Division entered an industrial district fighting broke out that included mortars and artillery. There were also clashes in Tuz Kharmato, and the Hashd were said to be moving to cut the road from there to Kirkuk.

There are various factors leading to this huge breakdown in Iraq, but there’s also a good chance that the conflagration won’t last. First, Kurdish President Massoud Barzani pushed through the independence referendum on his own without consulting with other Kurdish parties, but rather assuming they would all come on board, which they didn’t. There was also no preparation for Baghdad’s response, and the KDP constantly attacked the federal government for not following the constitution and being a reincarnation of the Saddam regime. Second, Prime Minister Haidar Abadi was put under intense pressure by parliamentarians demanding the Kurds be punished for the election. Abadi had to respond to the KRG as a result imposing a flight ban, talked about shutting down border points, etc. Third, he took it from those measures that were largely symbolic to demanding that the Kurds withdraw from southern Kirkuk to their pre-2014 positions, which was a huge escalation and threatened a military confrontation. That blew up in his face. All the while, Baghdad and Irbil offered talks, but on terms that neither would agree upon. The Americans started off telling the Kurds not to hold the referendum, to offering to defuse the situation, but came in too late. With fighting underway Washington is likely to pressure the two sides to halt. However, getting the two sides to come together and achieve anything substantial will be hard at best as the political repercussions of this clash will run deep.