This two day trip will begin with pomp and circumstance where Prime Minister Modi is returning the ceremonious favor of the Houston ‘Howdy Modi’ event celebrated Modi’s visit to the United States in 2019. 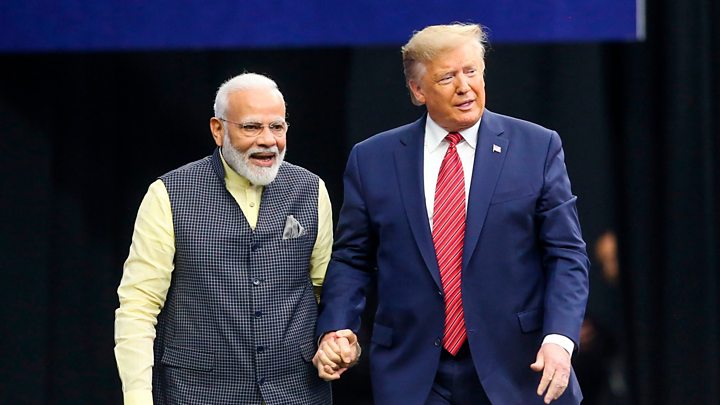 Talks could very well include some kind of peace mediation between India and Pakistan over Kashmir. The U.S. will need assistance in this regard and mutually so as the Taliban one-week quiet period has begun and Pakistan is for the most part on notice to stand with the United States and not with the Taliban- al Qaeda militants known to have sanctuary from time to time in Pakistan including the Haqqani network.
Another important component of the Trump-Modi meeting is China. Military cooperation may be an important topic due to regional aggression by China. You can bet that President Trump will offer India to buy more military aircraft and equipment from the United States.
The bigger part of the talks may well include Venezuela. India is a nation that has not joined countless other nations to recognize Juan Guaido as the interim president of Venezuela and India is a large buyer of Venezuelan oil.

President Trump has grown quite impatient over the regime change in Venezuela.
The United States still has the military option on the table as well as a naval blockade.

The U.S. has put several companies that continue to do business in Venezuela on notice, the official said, including India’s Reliance Industries, Spain’s Repsol, Chevron and Greek shippers. Trump is likely to raise the issue of India’s oil imports from Venezuela with Indian Prime Minister Narendra Modi during a two-day visit next week, the official said Friday in a briefing for reporters.

The official asked not to be identified as a condition of participation in the briefing. The Trump administration has long sought to oust Maduro’s regime but has so far failed to replace him with the opposition leader it supports, National Assembly President Juan Guaido. Guaido was a surprise guest of Trump at this month’s State of the Union address.

Trump has ordered his administration to use any tools necessary to build pressure on Maduro with the goal of securing free and fair elections in Venezuela, the official said. The U.S. doesn’t believe that free elections are possible with Maduro in power, the official said.

The U.S. continues to pursue what the official called a “Trump doctrine” to foster democratic governments throughout the Western Hemisphere, akin to the Monroe Doctrine, which warned against European colonization efforts in the Americas two centuries ago. Venezuela, Cuba and Nicaragua remain impediments, the official said, adding that actions by Russia and China in the region are unacceptable.

The U.S. is also frustrated by Spain, which it believes is too accommodating to Maduro allies who seek to flee Venezuela. Spain has been hesitant to help oust Maduro and remains the biggest barrier in the EU to the U.S. campaign, the official said. More here from Bloomberg.