Since its inception of The Lincoln Project last November — announced with a blistering New York Times op-ed — the brainchild of George Conway, Steve Schmidt, Rick Wilson and John Weaver has raked in more than $19.4 million, according to FEC filings, and has needled President Trump repeatedly with provocative TV ads.

But the group — which the National Review on Monday dubbed “The Grifter Project” and Sen. John Cornyn (R-Texas) last week dismissed as a “cabal of political consultants all in it for the money” — don’t exactly practice what they preach.

Co-founder Weaver, a political consultant known for his work on John McCain’s and John Kasich’s presidential campaigns, registered as a Russian foreign agent for uranium conglomerate TENEX in a six-figure deal last year, filings with the Department of Justice show.

TENEX’s parent company is Rosatom, a Russian state-owned corporation that also owns Uranium One — the company that paid Bill Clinton $500,000 in speaking fees and millions to the Clinton Foundation after then-President Barack Obama and Secretary of State Hillary Clinton signed off on the controversial merger in 2010.

Weaver backed out of the lobbying gig in May 2019 and called it “a mistake” in a tweet in which he denied having taken any money from TENEX. Read more here. 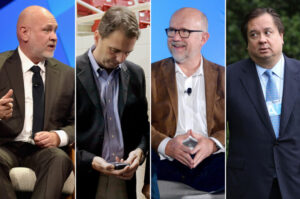 The former GOP operatives behind The Lincoln Project are expanding their list of Republican targets, infuriating allies of President Trump‘s and national Republicans scrambling to preserve the GOP majority in the Senate.

In addition to a relentless negative ad campaign against Trump, the group has so far spent more than $1.3 million attacking Sen. Susan Collins (Maine), who is among the most vulnerable GOP senators up for reelection. That’s by far the most they’ve spent on any Senate candidate.

The group is running ads in support of Democratic Senate candidate Steve Bullock in Montana and independent Al Gross in Alaska, who are seeking to unseat Sens. Steve Daines (R-Mont.) and Dan Sullivan (R-Alaska), respectively.

Galen said the group is also “taking a look at the House,” with a potential announcement on that front coming soon. In addition, The Lincoln Project is planning a “substantive and robust” effort to encourage voters to send in mail or absentee ballots.

The Lincoln Project is taking heat from Republicans for backing challengers to blue-state GOP senators and moderates, such as Collins, who voted against Trump’s efforts to repeal ObamaCare. Galen defended the attacks, saying they’ll target anyone who they believe has inadequately fought back against Trump.

The Lincoln Project has gone viral with ad campaigns attacking Trump and any GOP senator they believe has not done enough to stand up to the president.

Republicans working to reelect Trump and maintain the majority in the Senate are hitting back, alleging that the former GOP operatives are “grifters” who have taken up electing Democrats because they lost their cushy establishment jobs when Trump was elected.

They’re accusing The Lincoln Project of being a “scam” PAC that funnels money directly to firms with close ties to the founders.

“The Lincoln Project is comprised of grifters who are nothing more than agents of the Democrat Party,” said Republican National Committee spokesman Steve Guest. “Above all else, these political opportunists are solely concerned with making a quick buck for themselves.”

The Lincoln Project has routed millions of dollars through firms owned or run by two of its co-founders, Galen and Ron Steslow, the president of the consulting firm TUSK Inc. More here from The Hill.