Primer: The FBI has established a predicate, otherwise the activities as noted below would not have been authorized.

FNC: The FBI’s subpoena of a laptop and hard drive purportedly belonging to Hunter Biden came in connection with a money laundering investigation in late 2019, according to documents obtained by Fox News and verified by multiple federal law enforcement officials who reviewed them.

It is unclear, at this point, whether the investigation is ongoing or if it was directly related to Hunter Biden.

Multiple federal law enforcement officials, as well as two separate government officials, confirmed the authenticity of these documents, which were signed by FBI Special Agent Joshua Wilson. Wilson did not immediately respond to Fox News’ request for comment.

One of the documents, obtained by Fox News, was designated as an FBI “Receipt for Property” form, which details the bureau’s interactions with John Paul Mac Isaac, the owner of “The Mac Shop” who reported the laptop’s contents to authorities. 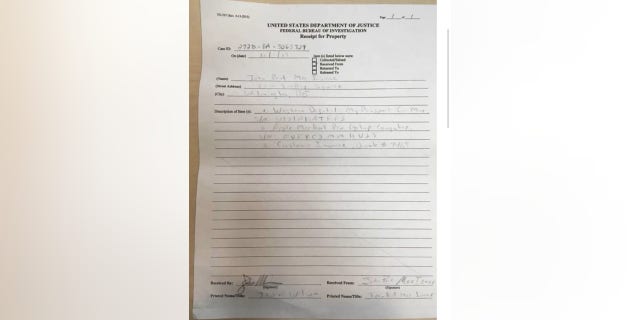 According to multiple officials, and the FBI’s website, “272” is the bureau’s classification for money laundering, while “272D” refers to “Money Laundering, Unknown SUA [Specified Unlawful Activity]—White Collar Crime Program,” according to FBI documents. One government official described “272D” as “transnational or blanket.”

The documents state that the subpoena was carried out in Wilmington, Del., which falls under the jurisdiction of the FBI’s Baltimore Field Office. 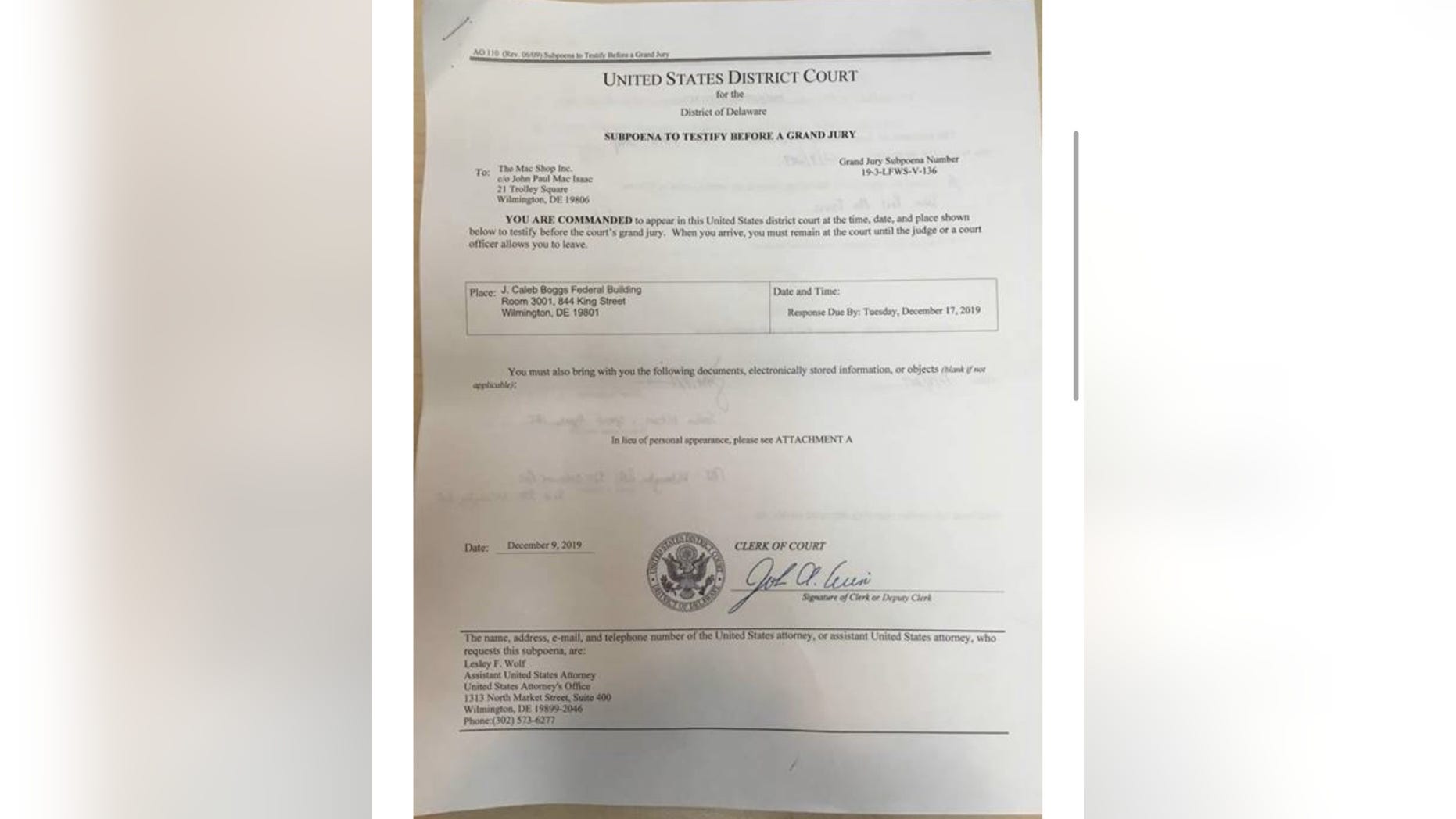 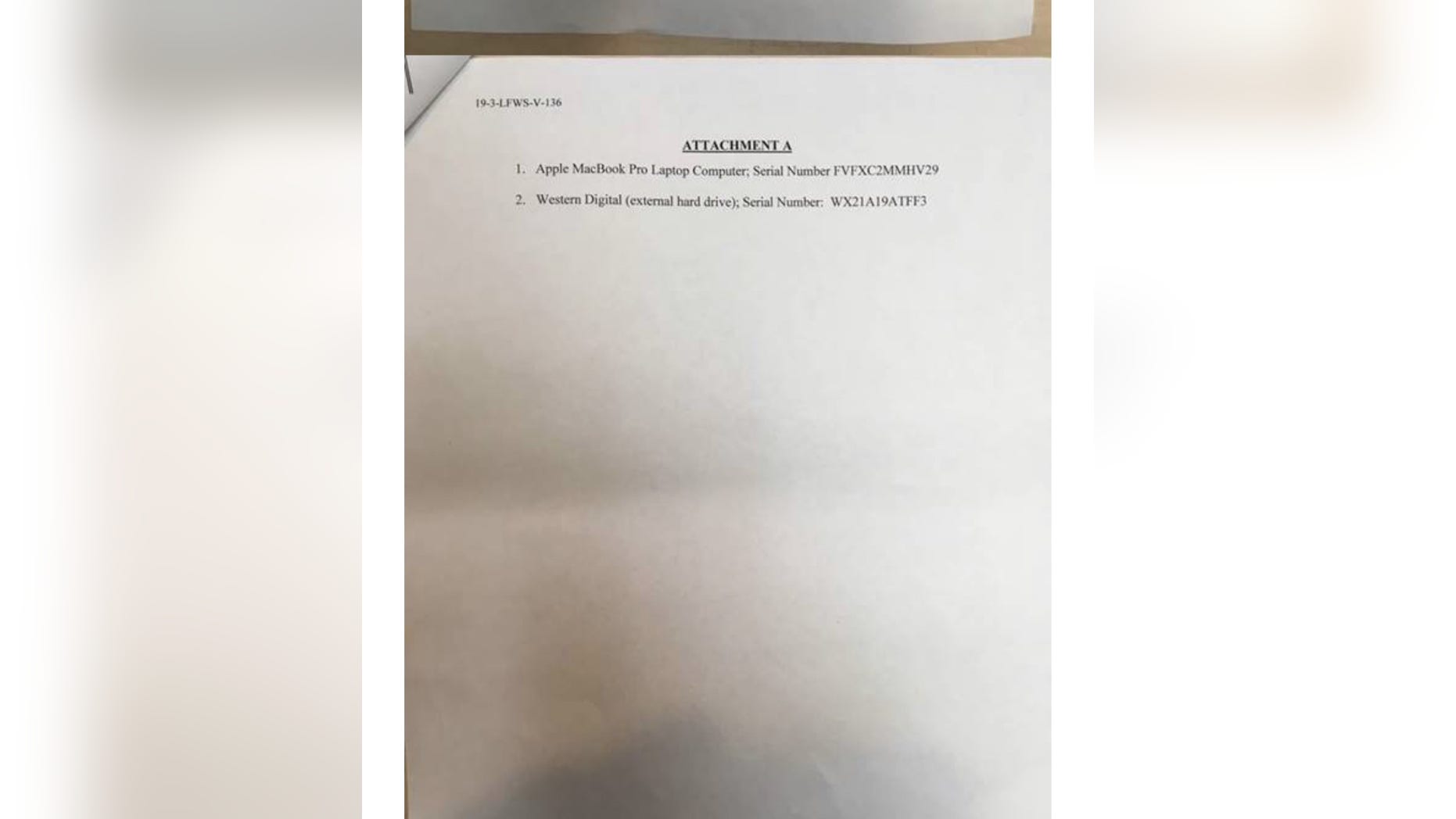 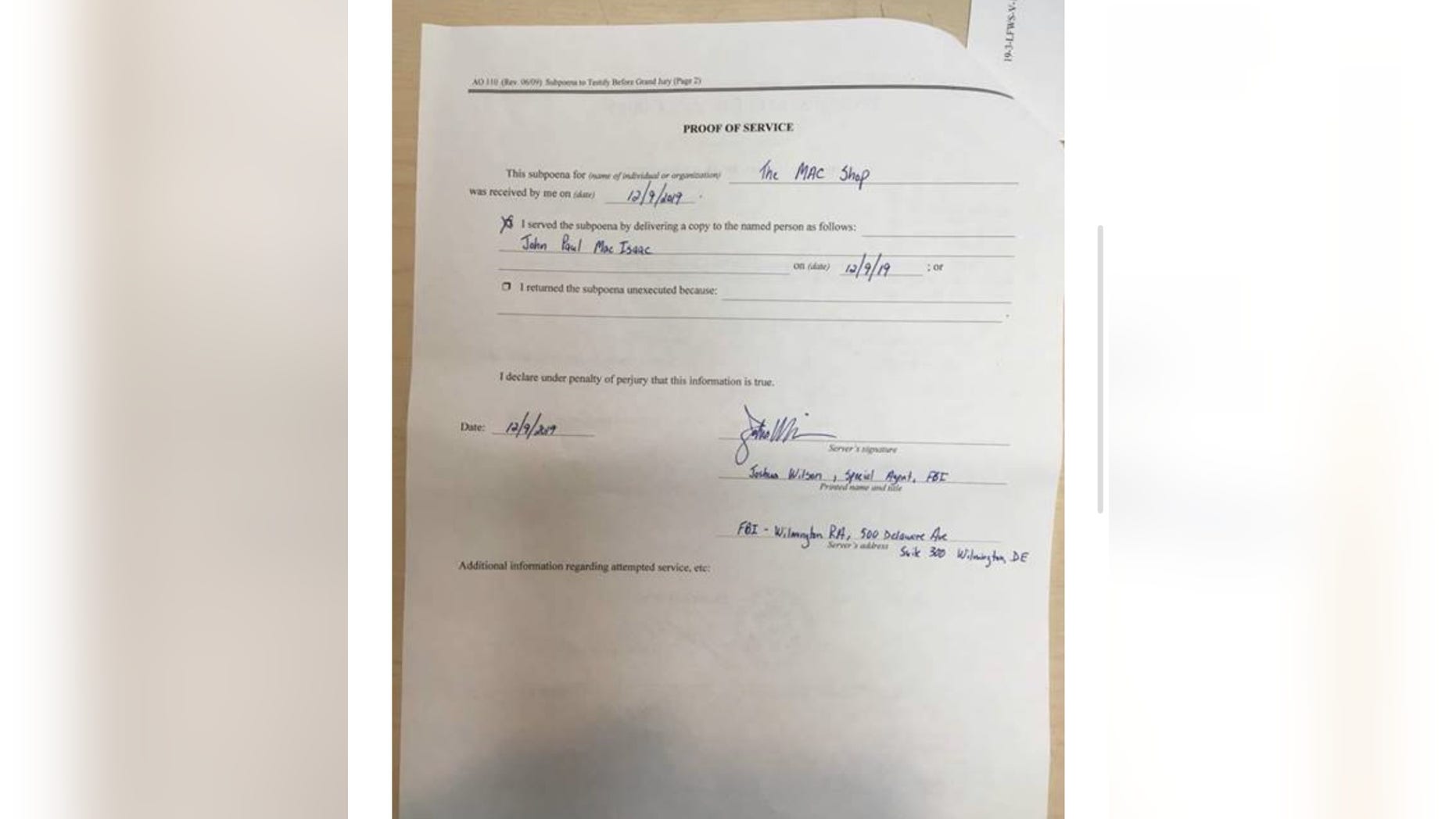 “The FBI cannot open a case without predication, so they believed there was predication for criminal activity,” a government official told Fox News. “This means there was sufficient evidence to believe that there was criminal conduct.”

Another document, obtained by Fox News, was a subpoena sent to Isaac to testify before U.S. District Court in Delaware on Dec. 9, 2019. One page of the subpoena shows what appears to be serial numbers for a laptop and hard drive taken into possession.

Based on the date of the subpoena, an official told Fox News that the case would have been opened prior to Isaac’s subpoena.

“If a criminal case was opened and subpoenas were issued, that means there is a high likelihood that both the laptop and hard drive contain fruits of criminal activity,” the official said.

Fox News first reported on Tuesday evening that the FBI is in possession of the laptop in question.

The FBI has declined to confirm or deny the existence of an investigation into the laptop or the emails, as is standard practice.

“The Attorney General of Delaware’s office indicated that the FBI has ‘ongoing investigations regarding the veracity of this entire story.’ And it would be unsurprising for an investigation of a disinformation action involving Rudy Giuliani and those assisting him to involve questions about money laundering, especially since there are other documented inquiries into his dealings,” Biden campaign spokesman Andrew Bates said in a statement to Fox News. “In fact, Donald Trump’s own national security adviser warned the president that material furnished by Giuliani should be considered tainted by Russian interference.”

Giuliani, this week, reportedly turned over a copy of the hard drive to New Castle County Police Department in Delaware.

Richard Sauber, an attorney connected to the Biden campaign, said, in a statement to Fox News: “Criminal investigations of Russian disinformation campaigns that include the witting participation of American citizens like Rudy Giuliani often involve investigation by the FBI of whether the American has received payment for these activities that would implicate the Federal Money Laundering statutes.”

Director of National Intelligence John Ratcliffe, however, confirmed this week that the laptop, purportedly belonging to Hunter Biden, and the emails on it “is not part of some Russian disinformation campaign,” despite claims from House Intelligence Committee Chairman Adam Schiff, D-Calif.

The FBI, in a letter to Senate Homeland Security and Governmental Affairs Chairman Ron Johnson, R-Wis., who is investigating Hunter Biden’s business dealings as well as the laptop in question, said that the bureau has “nothing to add at this time to the October 19th public statement by the Director of National Intelligence about the available actionable intelligence.”

“If actionable intelligence is developed, the FBI in consultation with the Intelligence Community will evaluate the need to provide defensive briefings to you and the Committee pursuant to the established notification framework,” the letter stated.

The FBI, in its letter to Johnson, wrote that “consistent with longstanding Department of Justice (Department) policy and practice, the FBI can neither confirm nor deny the existence of any ongoing investigation or persons or entities under investigation, including to Members of Congress.”

“As the Inspector General firmly reminded the Department and the FBI in recent years, this policy is designed to preserve the integrity of all Justice Department investigations and the Department’s ability to effectively administer justice without political or other undue outside influences,” Tyson wrote.  “Therefore, the FBI cannot provide any additional information in response to the enumerated questions in your letter.”

The emails in question were first obtained by the New York Post and, in part, revealed that Hunter Biden allegedly introduced his father, the then-vice president, to a top executive at Ukrainian natural gas firm Burisma Holdings less than a year before he pressured government officials in Ukraine to fire prosecutor Viktor Shokin, who was investigating the company’s founder.

The New York Post report revealed that Biden, at Hunter’s request, allegedly met with the executive, Vadym Pozharskyi, in April 2015 in Washington, D.C.

The meeting was mentioned in an email of appreciation, according to the Post, that Pozharskyi sent to Hunter Biden on April 17, 2015 — a year after Hunter took on his position on the board of Burisma.

The Biden campaign told Fox News Sunday that the former vice president “never had a meeting” with Pozharskyi.

Biden, prior to the emails surfacing, repeatedly has claimed he’s “never spoken to my son about his overseas business dealings.”

Hunter Biden’s business dealings, and his role on the board of Burisma, emerged during the Trump impeachment inquiry in 2019.

Another email, dated May 13, 2017, and obtained by Fox News, includes a discussion of “renumeration packages” for six people in a business deal with a Chinese energy firm. The email appeared to identify Hunter Biden as “Chair/Vice Chair depending on an agreement with CEFC,” in an apparent reference to now-bankrupt CEFC China Energy Co.

The email includes a note that “Hunter has some office expectations he will elaborate.” A proposed equity split references “20” for “H” and “10 held by H for the big guy?” with no further details.

Fox News spoke to one of the people who was copied on the email, who confirmed its authenticity.

Sources also told Fox News that “the big guy” was a reference to the former vice president. The New York Post initially published the emails, and others, that Fox News has also obtained.

While Biden has not commented on that email, or his alleged involvement in any deals with the Chinese Energy firm, his campaign said it released the former vice president’s tax documents and returns, which do not reflect any involvement with Chinese investments.

Fox News also obtained an email last week that revealed an adviser of Burisma Holdings, Vadym Pozharskyi, wrote an email to Hunter Biden on May 12, 2014, requesting “advice” on how he could use his “influence to convey a message” to “stop” what the company considers to be “politically motivated actions.”

“We urgently need your advice on how you could use your influence to convey a message / signal, etc .to stop what we consider to be politically motivated actions,” Pozharskyi wrote.

The email, part of a longer email chain obtained by Fox News, appeared to be referencing the firm’s founder, Mykola Zlochevsky, being under investigation.