RFERL: The UN’s nuclear watchdog has issued a report saying Iran is preparing for possible major expansion of uranium enrichment in a fortified underground facility. 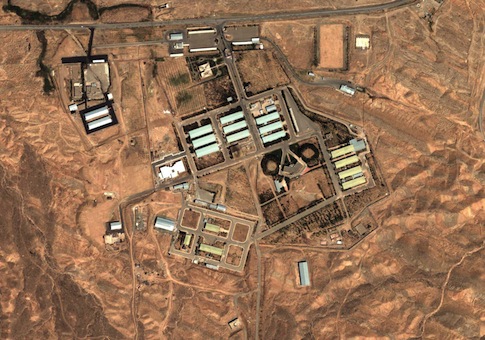 The report says Iran has produced 189 kilograms of higher-grade enriched uranium since 2010 — up from 145 kilograms since May, when the previous quarterly report was issued.

The IAEA reported last year that Iran placed “a large explosives containment vessel” in Parchin in 2000 and constructed a building around it.

The facilities were designed to contain the detonation of up to 70 kilograms of high explosives — something the IAEA called “relevant to the development of an explosive nuclear device.”

Since that report, the IAEA has sought to send inspectors to the site of the suspected building but have been denied access by Iran to that part of the military base.

In recent months, the agency also has obtained information that indicates Iran has been busy cleaning up the suspected site, including tearing down some buildings and removing soil.

The last effort by the IAEA to convince Iran to let inspectors visit the site — where Iran denies clean-up activities are taking place — broke down in June when Tehran accused the agency of acting like an “intelligence organization.”

The IAEA’s latest report also says the number of enrichment centrifuges at Fordow has more than doubled to 2,140 from 1,064 in May.

The Fordow facility is extremely controversial for two reasons.

First, it is dug into a mountain, making it difficult to bomb — suggesting it could have a military purpose.

Secondly, the centrifuges at the facility are being used to enrich uranium to purities of 20 percent — far higher than the 4 percent needed for fuel for commercial reactors.

Iran has said it is producing the 20 percent-enriched fuel for use in research reactors to produce medical isotopes.

In Washington, the White House said it was closely studying the fresh IAEA report.

In Tehran, Ayatollah Ali Khamenei, Iran’s supreme leader, denied his country is seeking to develop nuclear weapons, adding Iran will “never abandon its right for the peaceful use of nuclear energy.”

In what appears to be a sign of the IAEA’s growing concern over Iran’s nuclear activities, the agency this week revealed it was creating a special Iran “task force.”

The task force is to scrutinize Tehran’s nuclear program and its compliance with UN resolutions — including those demanding a suspension of uranium enrichment.

Iran has denied any interest in nuclear arms.

Meanwhile, Congresswoman Liz Cheney is introducing legislation to fully terminate all of the Iran nuclear deal including the remaining sanctions waivers.

Yet, it seems that Turkey, a NATO member and in major dispute with the United States over Syria has not only defied NATO rules and the United States but has fully allied with Russia but for sure now as well Iran.

FDD: The European Bank for Reconstruction and Development (EBRD) announced yesterday that it will sell its 10 percent stake in the Istanbul stock exchange after Turkey named as its CEO a Turkish banker convicted in U.S. court for his role in a multi-billion dollar scheme to evade Washington’s sanctions on Iran. Ankara’s move to reward a sanctions buster further strengthens the argument that Turkey has become a permissive jurisdiction for illicit finance.

Turkey’s sovereign wealth fund offered today to buy EBRD’s shares, which would increase the fund’s stake in the stock exchange to over 90 percent. EBRD’s exit will mean the departure of Borsa Istanbul’s only major foreign stakeholder at a critical moment in Turkey’s relations with its western allies. Ankara’s military operation in northeast Syria targeting the Syrian Democratic Forces – Washington’s key partner in the fight against the Islamic State – has drawn sweeping condemnation from the international community.

Five days after Ankara launched its Syria incursion, the U.S. Treasury Department imposed sanctions on three Turkish officials and Turkey’s ministries of energy and defense. That same week, the Southern District of New York filed an indictment charging Halkbank, a Turkish public lender, for its role in the multi-billion dollar gas-for-gold scheme to evade U.S. sanctions against Iran. Halkbank’s deputy general manager, Mehmet Hakan Atilla, in 2018 received a sentence of 32 months for his role in the affair. At the time of Atilla’s sentencing, Turkish President Recep Tayyip Erdogan condemned the trial as a political attack on his government.

Atilla’s promotion is part of a string of appointments that showcase Erdogan’s policy of rehabilitating Iran sanctions busters and rewarding corrupt officials who further his personal ambitions. In September, Erdogan appointed former Minister for European Union Affairs Egemen Bagis as Turkey’s ambassador to Prague. Bagis had resigned from the ministry after a 2013 corruption scandal implicated him in accepting bribes related to the gas-for-gold scheme run through Halkbank.

Members of Erdogan’s Justice and Development Party (AKP) who dare criticize his policy of rehabilitating sanctions evaders continue to draw the Turkish president’s wrath. After publicly pronouncing strong opposition to Bagis’s ambassadorial appointment and other party policies, a senior AKP lawmaker, Mustafa Yeneroglu, resigned from the party yesterday after Erdogan commanded him to step down.

Another minister implicated in taking bribes as part of the Halkbank scheme, Zafer Caglayan, who served as minister of Economy in 2013 before resigning due to corruption allegations, has returned to political life as an AKP delegate from the Turkish city of Mersin. Caglayan is best known for accepting bribes of cash and jewelry worth tens of millions of dollars.

Erdogan’s rehabilitation of sanctions evaders continues to hurt Turkey’s image, economy, and investment climate. Ankara’s apparent disregard for U.S. sanctions, including those targeting Iran, Russia, and Venezuela, does not bode well for Washington or other NATO allies. Yet so far, President Donald Trump has shielded Erdogan from U.S. sanctions, the most recent of which he lifted after only nine days. In contrast, a biting sanctions bill focused on Turkey passed the House 403 to 16 on Tuesday. Like Congress, Trump should communicate to his Turkish counterpart that his policy of evading sanctions and rewarding sanctions busters could have dire consequences.