As Congressman Adam Schiff has announced a restart to all investigations into Trump’s business empire, Senator Sasse launched his own.

So, what is Senator Sasse doing?

Senate Judiciary Cmte. member Sasse says the US Justice Dept. has opened an investigation into allegations that dept. attorneys “may have committed professional misconduct in the manner in which the [Jeffrey] Epstein criminal matter was resolved.” 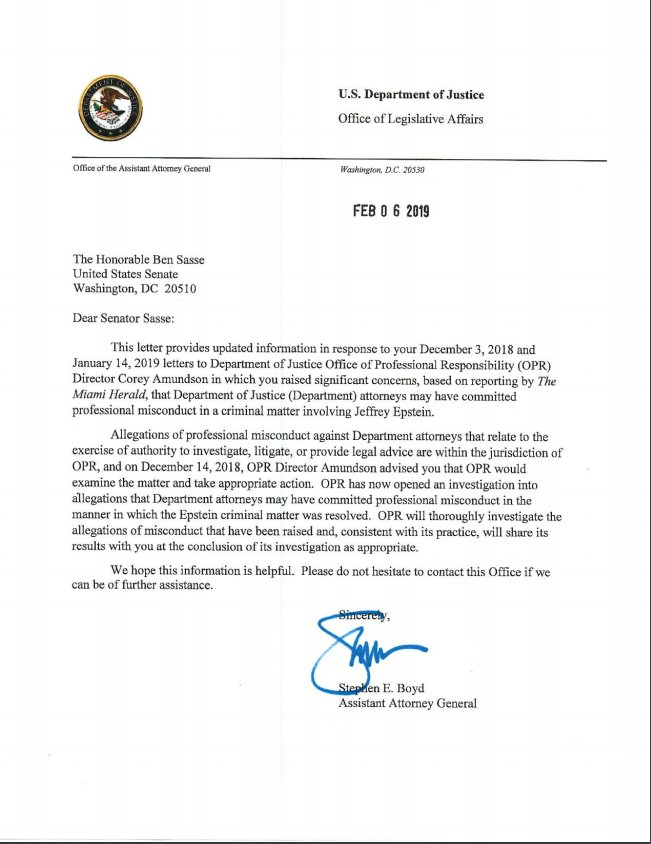 It seems as the Mueller team investigation is in the last lap, Adam Schiff has postured to own a political tribunal where the Mueller operation did not go.

Could it be that the interim AG at the Justice Department has laid the groundwork for the soon to be confirmed AG, Bob Barr to begin to right some previous wrongs and Jeffrey Epstein is the first of many?

The Office of Professional Responsibility has launched a probe into how Jeffrey Epstein got his plea deal. It is all going to get nasty.

It was an unusual meeting for the then-38-year-old prosecutor, a rising Republican star who had served in several White House posts before being named U.S. attorney in Miami by President George W. Bush.

Instead of meeting at the prosecutor’s Miami headquarters, the two men — both with professional roots in the prestigious Washington law firm of Kirkland & Ellis — convened at the Marriott in West Palm Beach, about 70 miles away. For Lefkowitz, 44, a U.S. special envoy to North Korea and corporate lawyer, the meeting was critical.

His client, Palm Beach multimillionaire Jeffrey Epstein, 54, was accused of assembling a large, cult-like network of underage girls — with the help of young female recruiters — to coerce into having sex acts behind the walls of his opulent waterfront mansion as often as three times a day, the Town of Palm Beach police found. Go here for the full story published by the Miami Herald last November.

Political warfare is here and will remain until 2020. This is how things go inside the Beltway….sigh