The General Accounting Office published a 2017 report on waste, fraud and abuse. Swell, right? Are there ever any corrections? Nah…but there are what is known as ‘high-risks’ areas….what?

GAO is adding 3 areas to the High-Risk List, bringing the total to 34:

OKLAHOMA CITY, OK – Senator James Lankford (R-OK) will release his annual federal government waste and solutions report during a press conference on Monday, November 27, 2017. This is the third volume of Lankford’s report entitled “Federal Fumbles: 100 ways the government dropped the ball.” The first report identified $105 billion in wasteful federal spending and about $800 billion in negative regulatory impact to the economy, and the second report listed $247 billion in wasteful spending and regulations. This year’s report will identify new examples of waste, inefficiency, and duplication in government, along with solutions to resolve each fumble.

“Every American should have access to how their tax dollars are spent,” said Lankford. “I hope every member of Congress, the Administration, and staff will utilize Federal Fumbles as they consider budget requests, hold hearings, and discuss reform legislation. In the first 11 months of the new Administration, we’ve worked to roll back wasteful spending and a number of harmful and burdensome regulations from previous Federal Fumbles reports. There is a lot of work to still be done. Our $20 trillion national debt will continue to grow until we stop it with spending cuts, government reforms, and a growing economy. Federal Fumbles volume three is my to-do list for 2018.”

There was a Senate hearing in April on Waste, Fraud and Abuse.

Citizens Against Government Waste publishes a Pig Book each year as well.

Pork-barrel spending is alive and well in Washington, D.C., despite claims to the contrary. For the fifth time since Congress enacted an earmark moratorium that began in fiscal year (FY) 2011, Citizens Against Government Waste (CAGW) has unearthed earmarks in the appropriations bills.

In fact, members of Congress have steadily ramped up the use of earmarks in each year since the initiation of the earmark moratorium. The 2017 Congressional Pig Book exposes 163 earmarks in FY 2017, an increase of 32.5 percent from the 123 in FY 2016. The cost of earmarks in FY 2017 is $6.8 billion, an increase of 33.3 percent from the $5.1 billion in FY 2016. While the increase in cost over one year is disconcerting, the 106.1 percent increase over the $3.3 billion in FY 2012, the first year after the moratorium, is downright disturbing. 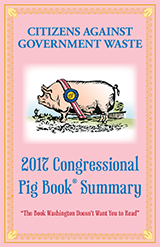 Publication of the 2017 Pig Book also marks 11 years since the record earmark amount of $29 billion in FY 2006. In order for earmarks to reach that level over the next decade, legislators would need to increase the cost of the items by just $2.3 billion annually. Unfortunately, this is not out of the question given the growth over the past five years.

You can actually type in a keyword and see what is in the 2017 data by clicking here. The Pig Book is published by government agency and you can review the results here.