Prepare for a little work on your part, it is a fight we need to win.

Reckless medical care, malpractice or malfeasance in the civilian world includes lawsuits and the removal of medical licenses. In the military….any and all active or former military service members can take NO action due to the Feres Doctrine. 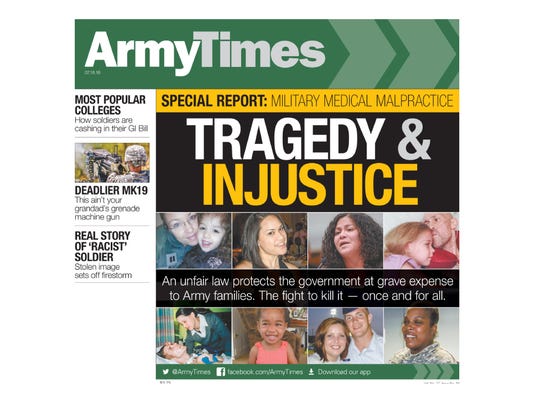 In 2002, the Senate Judiciary Committee had a hearing to amend the Feres Doctrine or to at least include waiver language. It went no where.

You can read about that hearing at this link and see who was on the committee at the time.

This has nothing to do with the VA, these are military hospitals wherever they are across the world. The military has sovereign immunity.

Under the Feres doctrine, service members are categorically banned from filing suits for harm incurred while on duty. Period, end of story. There are no exceptions, it is absolute.

Since its creation, courts and commentators have vehemently condemned the Feres doctrine. One of its most ardent critics was Antonin Scalia, the legendary conservative Supreme Court justice. In United States v. Johnson, Justice Scalia wrote that “Feres was wrongly decided and heartily deserves the ‘widespread, almost universal criticism’ it has received.” Yet, the Feres doctrine persists as national policy.

The given justification for the Feres doctrine is the protection of good order and discipline within the military. Without a doubt, commanding officers shouldn’t face the threat of a lawsuit for decisions made in combat or in preparing troops for battle. The Feres doctrine, though, goes too far by banning all suits “incident to service.”

Good order and discipline simply would not be harmed by the suit of a soldier burned due to known faulty wiring in his barracks, or a sexual assault victim, or a soldier who was secretly administered LSD to test its effects, or a Marine who had a towel left in his stomach during a routine procedure. Yet, the Feres doctrine summarily bans each of these suits.

By immunizing the military from civil liability, the Feres doctrine increases abuse of power and corruption by military officials. It is common sense that when officials are not held accountable for their misconduct, they tend to abuse their authority. That is why the Founders split the government’s power into three branches and allowed the courts to review the conduct of the other two branches. Judicial review is a cornerstone of our democracy.

Protected from lawsuits, however, military officials are freed from this constitutional accountability framework. Lawsuits not only allow victims of misconduct to be made whole, they inform the public of governmental wrongdoing. This information flow is critical in a representative democracy, where voters cannot change what they do not know.

*** How about the case of a wife and new mother dying due to malpractice?

On March 9, 2014, Walter Daniel’s wife, Lt. Rebekah Daniel, a Navy nurse stationed at Naval Hospital Bremerton in Washington, gave birth to a healthy baby girl at the facility where she worked. Four hours after the low-risk childbirth, she died due to blood loss.

In court documents, Daniel alleged the care team failed to prevent postpartum hemorrhaging, which caused Rebekah to lose “more than 1,500 ml of blood – nearly one-third of the amount of blood in the average human body” according to a statement put out by the Luvera Law Firm.

*** Now a terminal cancer case of a Green Beret that the hospital saw during an exam and did nothing, even refused to tell him. He has a year to live.

Sgt. 1st Class Richard Stayskal was deployed to Ramadi, Iraq, in 2004 when he was shot by a sniper. The round, which he kept as a souvenir, pierced his left lung and nearly killed him.

The round is “a reminder of how fragile life is,” he told Charlotte’s Fox 46. “Something could change everything in an instant.”

Despite beating the odds of such a grievous wound in combat, something else did change in an instant for the 37-year-old Green Beret when, following a June 2017 visit to a civilian doctor to address severe breathing issues the Army told him was a simple case of pneumonia, he received terrible news.

“Did a biopsy and when I woke up my wife was crying,” Stayskal told Fox 46. “And he [the doctor] was telling her that I had cancer.”

The tumor in Stayskal’s lungs had been egregiously misdiagnosed by Army doctors, the report said, allowing it to double in size and spread to other vital organs — and into stage four terminal lung cancer.

This is a fight we need to win for our war fighters….can you help and call your congress-person or senator and demand a new hearing and amendment to the Feres Doctrine? PLEASE?

There is an unknown number of victims of medical malpractice at military hospitals but does it matter?