The attack(s) continue to claim victims years later due to developing illnesses. Many may be unaware that post 9/11, illness claimed the lives of 3 FBI agents.

There is a fund with more than a billion dollars that has been available to survivors to have financial aid assisting in medical needs. Congress funded this account and frankly, Saudi Arabia and Iranian al Qaeda supporters should be funding this.

Meanwhile, for those too young to remember, share the following please:

The September 11th attacks took the lives of more than 3,000 Americans, and transformed the US in countless ways.

It sparked the Global War on Terror (which the US is now fighting in 76 countries), and the invasions of Afghanistan and Iraq.

It led to the creation of the Department of Homeland Security, the US Immigration and Customs Enforcement, and the Patriot Act.

In honor of the 17th anniversary of the horrific attacks, we compiled 17 photos showing how Manhattan’s Financial District and skyline have changed since 9/11 as the city rebuilt Ground Zero. See for yourself:

Here’s an aerial view of the Twin Towers on a peaceful June day in 1999.

But that skyline was horrifically shaken a little more than two years later.

You can see the stark difference between this August 30, 2001 photo and a photo taken from the spot 16 days after the attacks. It would take several months for rescuers to go through the rubble.

In December 2003, a design for the new One World Trade Center was finally unveiled.

But about four years after the unveiling, the site still looked about the same, as construction was hamstrung by lawsuits, budget overruns, design changes, and a recession.

The Freedom Tower was just starting to rise from the rubble.

In June 2010, the skyscraper was slowly rising.

By July 2011, the memorial waterfalls were being tested, and One World Trade Center’s facade was beginning to reflect the sky.

Here’s the Manhattan skyline in August 2011. You can see the unfinished tower beginning to peek over the other skyscrapers.

The memorial waterfalls officially opened in September 2011, and the museum, seen on the right, opened in May 2014.

The WTC Transportation Hub, on which the soaring white Oculus was built, was also under construction in late 2014.

The hub officially opened in June 2016, when 3 World Trade Center was still under construction.

The $50 million Liberty Park also opened in June 2016. From there, visitors can get an overhead view of the Ground Zero memorial.

And the Manhattan skyline was forever changed.

Then there was the Pentagon: 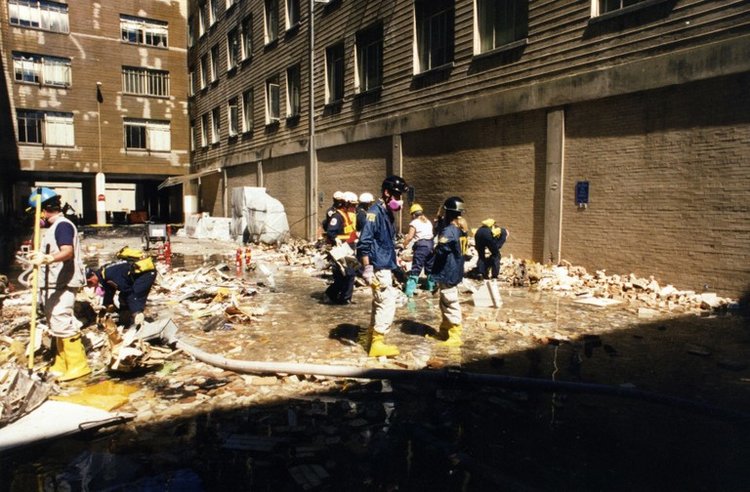 The FBI has released 27 new photos of the Pentagon on 9/11 after it was struck by a plane that was hijacked by five terrorists.

Five al-Qaeda terrorists took over American Airlines flight 77, which was traveling from Washington DC to Los Angeles, as it flew over eastern Kentucky. They then turned it back towards Washington, D.C., eventually crashing it into the Pentagon, killing 184 people.

The pictures released by the FBI show debris from the plane, the Pentagon on fire and crews putting out the blaze and cleaning up the damage.

More debris from the flight, which appears to be part of the body of the plane.

The red “C” in the American Airlines logo is clearly visible in this picture.

Dark smoke billows up over the flames still burning.

Crews working to put out the blaze.

Crews use heavy machinery to clean up the damage.

A large hole in the wall, which appears to have been caused by blowout.

A side view of the blowout hole.

Workers using more heavy machinery to clean up the damage.

Firefighters gazing down at the wreckage.

The Pentagon, seen at a distance, still smoldering.

Crews still going through the wreckage.

Crews in Haz Mat suits walking near the damage.

Workers shoveling up the ash and small debris.

Workers holding an American flag near the site.

Workers still picking up the debris.

A view inside the Pentagon.

Another view of the inside of the Pentagon.

A view from inside the Pentagon looking out.

A view from the top of where the plane struck the Pentagon.