The makeshift fishing boat was actually flying a large American flag. It is unclear if the migrants were actually residents of Cuba, however the investigation continues. They are all presently in the custody of the Border Patrol with the assistance of the Coast Guard and the FBI. They were later loaded into a commercial truck for detention transport after some were in fact found at a beach cafe. Border Patrol says they will be deported. 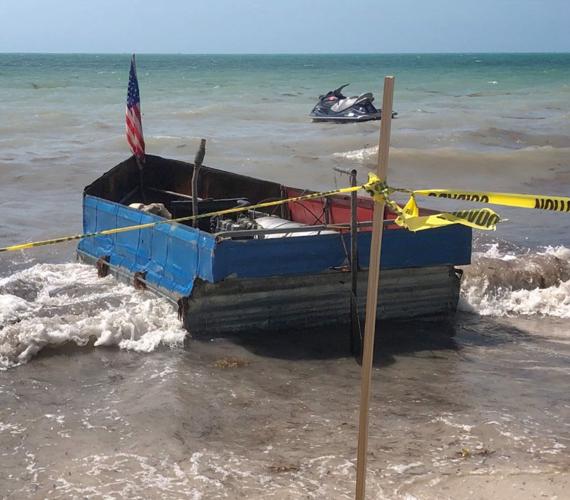 The Border Patrol said the groups were caught during seven separate landings, and that the migrants came from four different countries.

While most of the arrivals were from Cuba, a sports fishing yacht pulled into the shallow waters off Key West around 3:30 p.m. Sunday, unloading four people from Kazakhstan, nine people from Russia and two from Kyrgyzstan, a Department of Homeland Security spokesman said on background.

Federal officials did not offer specifics of that incident Monday, except for releasing a statement that it was likely a human smuggling operation.

“Smugglers have no regard for the lives of migrants, and far too many lives are lost at sea as individuals take the dangerous journey in makeshift boats, rafts, and other vessels ill-equipped to handle the rough waters. The Coast Guard, U.S. Customs and Border Protection (CBP), and local law enforcement patrol the waters, and individuals attempting to enter the United States by sea, without a lawful basis to enter, will be subject to removal.”

The landings come as the Border Patrol and Coast Guard are dealing with a surge in maritime migration from Cuba and Haiti to South Florida, numbers not seen in several years. The Keys and the island chain’s surrounding waters have been the migrants’ most frequent destination.

Last week, one man from Cuba was found dead in a migrant vessel that arrived with six survivors off Summerland Key in the Lower Keys.

The people on the boat said others in their group were missing at sea. The Coast Guard called off its search for those people over the weekend.