Not only does Maduro while struggling to hold on to power in Venezuela make full use of 25,000 Cuban military forces along with a security team provided by Putin known as the Wagner Group, but Maduro terrorizes his own citizens by deploying his ‘colectivos’.

Yes, they are rather like his own armada on motorcycles. And they too patrol the border between Venezuela and Columbia. The colectivos have been around for quite a while, in fact they were salaried going back to the Chavez regime. They have cell or branch operations in and around Caracas. They tell the media and citizens their job is to clean up corruption, enforce laws and to assist the police. Yeah….SURE.

It is likely that the colectivos also coordinate with the FAES, that is supposed to be the Venezuelan police but actually most of them come from the Bolivian government under orders. Nonetheless, all of these groups continue to believe in and carry on the Chavez revolution. 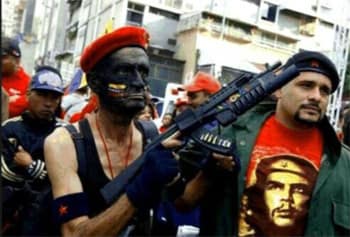 Negotiating with Maduro to get him to leave power and move to a sunny island as John Bolton suggested hardly means there will be peace after his departure given the marxist/communist operations that will remain. The interim president, Guido with the help of almost 80 countries will hardly have an easy transition to any new government.

The colectivos are not a gang but rather a Maduro/Chavez sanctioned paramilitary unit. They operate in every part of Venezuelan society, including schools, courts, retail stores and in hospitals. They control sports, provide food and humanitarian needs, television and radio and control community centers. Sounds rather like al Qaeda or Islamic State, doesn’t it? Many of the colectivos received training from FARC. That was/is the terror group that Obama and John Kerry negotiated with that was/is based in Columbia. (they still operate today, by the way)

The colectivos have direct access to the government resources including intelligence, money and weapons and tear gas. Many of them work during various shifts for the Maduro and the Bolivian government. Under approval of Maduro, the colectivos deal in the sale and distribution of drugs, gambling and extort anyone they can.