(Reuters) – New York City needs a $7.4 billion in federal aid to offset economic losses from the coronavirus, Mayor Bill de Blasio said on Sunday, urging President Donald Trump to push his fellow Republicans in the U.S. Senate to back more relief funding for states and cities.

“The federal government must make us whole for us to be able to be in a position to restart,” De Blasio, a Democrat, said in an interview on Fox News. “If New York City is not whole, it will drag down the entire region, and it will hold up the entire national economic restart.”

I am reminded of the ol song New York New York written for Liza Minelli but made more famous by Frank Sinatra. One part of the lyrics include”

These little town blues
Are melting away
I’ll make a brand new start of it
In old New York
If I can make it there, I’ll make it anywhere
It’s up to you, New York, New York
(note: old New York and it is up to you New York, but you have de Blasio now)

Really Mr. Mayor? Thanks to Open the Books, let’s go deeper shall we?

New York’s budget deficit ballooned from $6 billion to $13 billion while the Empire State was the epicenter of the coronavirus pandemic. But the financial woes aren’t stopping 290,304 government employees from bringing home six-figure salaries and higher.

Our auditors at OpentheBooks.com found plumbers in New York City making $285,000 per year; police officers at the Port Authority of New York-New Jersey earning $423,467; Long Island school superintendents making up to $547,049; and a 93-year old college professor retired on a $561,754 pension.

So, maybe it’s no surprise that the New York General Assembly hiked their own pay and will be the most highly compensated state legislature in the country by 2021 with salaries of $130,000.

Using our new interactive mapping tool, quickly review (by ZIP code) the 290,304 New York public employees and retirees who earned more than $100,000 and cost taxpayers $38 billion (FY2018-9). Just click a pin and scroll down to see the results rendered in the chart beneath the map. 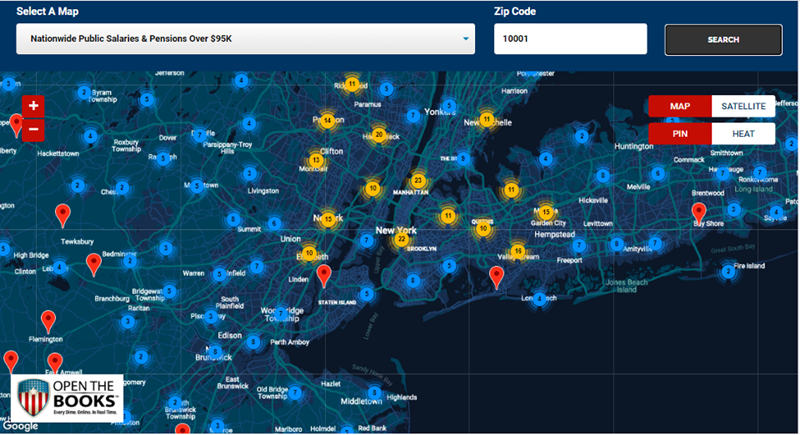 Across New York state (98,848) – We found 302 employees of the Division of State Police out-earned the governor and made up to $252,921 in salary, overtime, and other pay. Reviewing pensions at every level of government across the state, 802 retirees made more than Cuomo’s salary ($178,500).

Clarkstown’s finance manager pointed to recent reforms and argued that officers Parent and Prendergast had extenuating circumstances. However, we found 25 Clarkstown employees made more than $232,821 in 2018, the latest year available.

The Town of Ramapo responded by acknowledging that Cokeley cashed in a lot of benefits before retiring. In 2018, 10 employees of Ramapo made more than $233,784.

In total, $38 billion in cash compensation flowed to local and state government workers across New York who earned six figures. Our auditors did not include the cost of benefits.

We also haven’t included the payroll costs of at least 12,373 federal employees making $100,000 within the executive agencies based in New York.

Despite a city workforce of 329,000, the rats outsmarted the bureaucrats.

Last year, in a co-investigation with The New York Times NYT, we mapped 130,000 rat sightings since 2010 and found that reports to the city’s 311 hotline soared nearly 38-percent.

Then, there are the double dippers who get elected, retire, and then get re-elected. Local news reported that twenty-one current reps and state senators double dip the system and collect a salary and a pension at the same time in their same position.

Central Islip Union Free School District on Long Island paid nine of the top ten most highly compensated educators in the state. Incredibly, those salaries ranged from $444,332 to $514,934.

Before the COVID-19 crisis, New York state government was facing its biggest budget shortfall in a decade. Now, with tax revenues dropping, more underlying financial weaknesses are being exposed.

In his daily press conferences, Cuomo says that New York is broke. The governor is asking Congress for a $60 billion coronavirus bailout over the next three years.

House Speaker Nancy Pelosi would be happy to oblige. She recently helped pass the HEROES Act in the House which would provide $500 billion in state aid. However, U.S. Senate Leader Mitch McConnell said there isn’t going to be a “blue state bailout.”

However, New York, like many states with excessive pay and pension costs, intends to rely on a U.S. taxpayer bailout to see them through their fiscal woes.