Obama admin secretly used the Federal Reserve Bank to move $8.6 million to Iran for nuclear-related material. Then they circled back and tried to use the Fed to move several billion dollars more for Iran. Note from State Dept meeting with Oman bank: 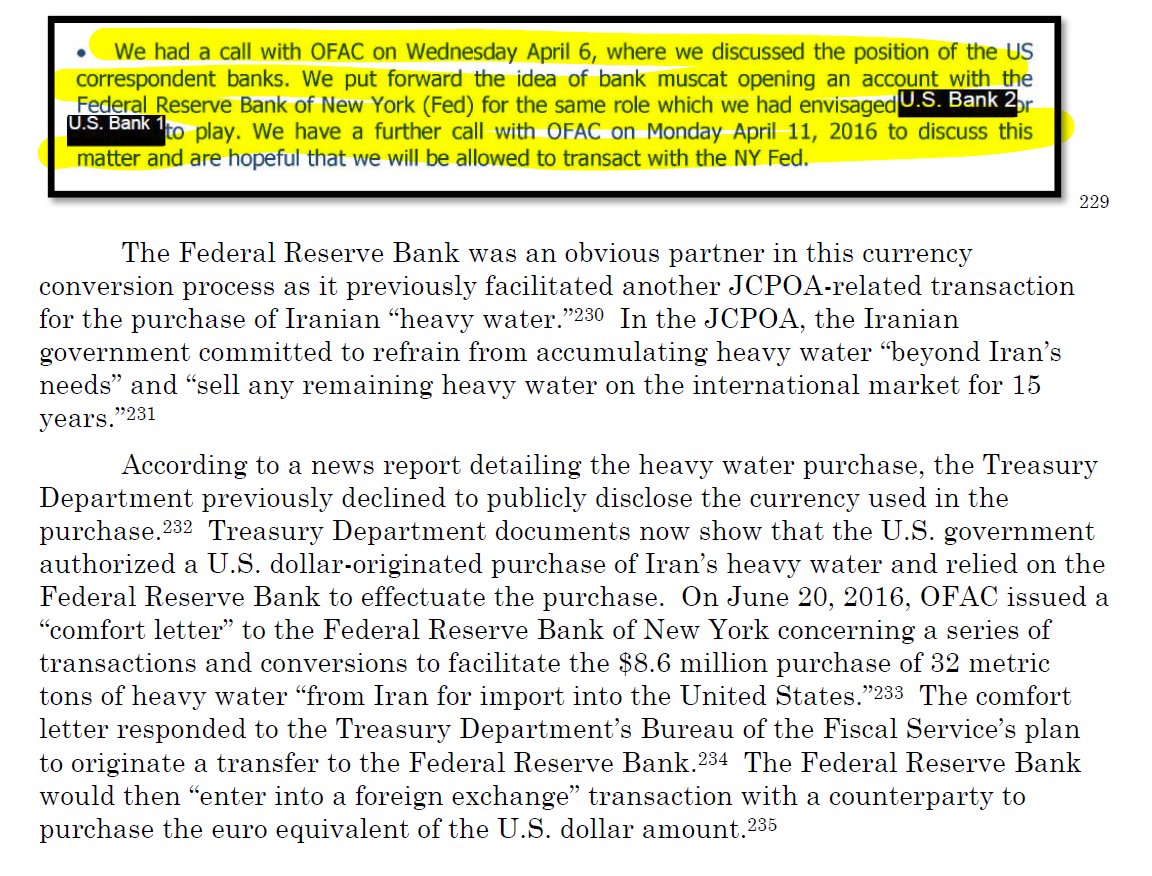 It is getting more nefarious since the Kerry/Obama team are gone and left lots of unfinished business behind, or just ignored it.

Iran’s Revolutionary Guard Corps are employing German companies to disguise their illicit funding of the war against the pro-US government in Yemen.

According to interviews with US Treasury Department officials, Time added: “The IRGC had then printed counterfeit Yemeni banknotes potentially worth hundreds of millions of dollars and used the bogus rials to fund its proxy war against the beleaguered pro-US government in the capital of Sanaa. German companies were being used as a cover by the Iranians to finance the world’s worst humanitarian conflict.”

The report said that US officials, who uncovered the Iranian counterfeiting operation, met with their German counterparts at the Federal Ministry of Finance in Berlin last April.

According to Time: “The evidence, uncovered by US illicit-finance investigators, was meant to sway the Germans, but not just in hopes of countering Iran’s moves on the southern tip of the Arabian Peninsula” but also “to convince Berlin that Tehran cannot be trusted and that the Germans should join the Trump Administration in imposing economy-crippling sanctions on Iran.”

US President Donald Trump issued an executive order in 2017 extending the designation of the IRGC as a terrorist organization. But Germany has declined to outlaw the IRGC as a terrorist entity. The mass circulation Bild reported on Thursday that Germany will permit former IRGC member Hadi Mofateh to run the Iranian regime-controlled Islamic Center of Hamburg.

Time wrote that weeks after the initial meeting in the German finance ministry, “American officials presented their hosts with one last set of documents: detailed blueprints on how the Trump Administration was preparing to unleash financial warfare on the Iranian economy.”

Germany is widely considered the least cooperative of the US’s European allies in confronting Iran’s bellicose activities, according to two sources familiar with US-German talks on the Iran nuclear deal. German exports to the Islamic Republic of Iran climbed to €3.5 billion in 2017, up from €2.6b. in 2016.

A German intelligence report from the city-state of Hamburg in July said Iran’s regime is continuing to seek weapons of mass destruction.

The Post reviewed the 211 page document that says: “some of the crisis countries… are still making an effort to obtain products for the manufacture of atomic, biological and chemical weapons of mass destruction (proliferation) and the corresponding missile carrier technology (rocket technology).”

The Hamburg report added: “The current main focus points of countries in the area of relevant proliferation activities are: Iran, Syria, Pakistan and North Korea.”

The Trump administration said in December that it believed 80 percent of the manpower supporting the Syrian regime was made up of “Iranian proxies,” including foreign Shiite fighters. Israel has accused Iran of sending as many as 80,000 fighters to Syria.

It is impossible to know the exact number of Afghan recruits in Syria, because many slip back and forth between Iran and Afghanistan, do not tell their families where they are, and hide their military service for fear of being sent to prison in Afghanistan for fighting on behalf of another country. Yet for some, especially those from the long-persecuted Hazara minority, it seems to be a secret badge of honor.

“Nobody forced us to go fight, but it gives you a kind of pride,” said Hussain, 26, a muscular Hazara man in Herat with scars on his face and hands from old shrapnel wounds. He has served in four deployments in Syria since 2014, earning upward of $600 a month, and returned again two months ago from the front. He said he originally decided to enlist while he was working as a carpenter in Iran and saw a video of Islamic State fighters chopping off victims’ heads. More details here.