DUBAI (Reuters) – Hundreds of thousands of Iranians marched and some burned U.S. flags to mark the revolution’s 40th anniversary on Monday as Tehran showed off ballistic missiles in defiance of U.S. efforts to curb its military power.

Soldiers, students, clerics and black-clad women holding small children thronged streets across Iran, many with portraits of Ayatollah Ruhollah Khomeini, the Shi’ite cleric who toppled the Shah in an Islamic uprising that still haunts the West.

On Feb. 11, 1979 Iran’s army declared its neutrality, paving the way for the fall of U.S.-backed Shah Mohammad Reza Pahlavi.

Iran warns it would ‘raze Tel Aviv to the ground’ if attacked by U.S.: IRNA

After decades of hostility with the United States, the Islamic Republic vowed to increase its military strength despite mounting pressure from Western countries.

Ballistic missile capabilities were on display during the main march, including the Qadr F, a ground-to-ground missile with a 1,950-km (1,220-mile) range, Tasnim news agency said.

“We have not asked and will not ask for permission to develop different types of … missiles and will continue our path and our military power,” President Hassan Rouhani said in a speech at Tehran’s Azadi (Freedom) square.

U.S. President Donald Trump tweeted on Monday that the Iranian government had let down its people.

“40 years of corruption. 40 years of repression. 40 years of terror. The regime in Iran has produced only #40YearsofFailure. The long-suffering Iranian people deserve a much brighter future,” he posted in both English and Farsi.

The large turnout in state-sponsored rallies, in which U.S. and Israeli flags were burned, came as Iranians face mounting economic hardships many blame on the country’s clerical leaders.

“Our presence in the 40th anniversary of the revolution is to show our support for the Islamic Republic,” said one sign held by a protester. “But it does not mean we support corruption of some officials and their betrayal of the oppressed people.”

Last year, Iran cracked down on protests over poor living standards that posed the most serious challenge to its clerical elite since a 2009 uprising over disputed elections.

“I bow in admiration to Iran’s resilient people who – despite hardships and grievances – today poured into streets by the millions to mark 40th anniv of their Islamic Revolution, which some in the US wished would never come,” Iranian Foreign Minister Mohammad Javad Zarif tweeted.

“US should take note: REAL Iranians never succumb to diktats.”

In January, Rouhani said Iran was dealing with its worst economic crisis since the Shah was toppled.

But he remained defiant on Monday as Iranians recalled the end of a monarch who catered to the rich. “The Iranian people have and will have some economic difficulties but we will overcome the problems by helping each other,” he said.

“The United States does not have the courage to fire a single bullet at us despite all its defensive and military assets. But if they attack us, we will raze Tel Aviv and Haifa to the ground,” Javani told the state news agency IRNA.

Israeli Prime Minister Benjamin Netanyahu dismissed the threat. “I am not ignoring the threats of the Iranian regime, but nor I am impressed by them,” he said.

“Were this regime to make the terrible mistake of trying to destroy Tel Aviv and Haifa, it would not succeed, but it would mean that they had celebrated their last Revolution Day. They would do well to take that into account.”

Washington and the Arab world have viewed Iran with great suspicion since the Islamic Revolution, fearing Khomeini’s radical ideology would inspire militants across the Middle East.

Today, the United States, its Arab allies and Israel are trying to counter Tehran’s growing influence in the Middle East, where it has proxies in Syria, Lebanon and Yemen.

Iran also has vast clout in Iraq, where Major-General Qassem Soleimani, head of the overseas arm of the Revolutionary Guards, was frequently photographed guiding Shi’ite militias in the war against Sunni Islamic State militants.

U.S. President Donald Trump tweeted on Monday that the Iranian government had let down its people.

“40 years of corruption. 40 years of repression. 40 years of terror. The regime in Iran has produced only #40YearsofFailure. The long-suffering Iranian people deserve a much brighter future,” he posted in both English and Farsi.

Source: Documents of the U.S. Espionage Den (Tehran: Muslim Students Following the Line of the Imam, c. 1981)
This fascinating analysis of the political and social force that would come to dominate the revolution is one indication that line officers in Iran were well aware of the Shiite phenomenon in the country at an earlier time than is sometimes assumed.  Ayatollah Khomeini is specifically named as the “symbolic leader” of the revolution.  The Embassy’s staff admits they have been “laboring” to get a better understanding of the “renascent Shi’ite religious movement” and they make plain that part of the problem is that Iranians within and outside of the government have consistently “peddled” the view that “Khomeini’s followers are for the most part crypto Communists or leftists of Marxist stripe.”  The telegram goes on to give a brief survey of Shiism and Iranian monarchical mistreatment of the “Islamic establishment,” presumably in an attempt to educate non-specialists higher up in the Department.  The telegram specifically advises that “it has become obvious that Islam is deeply imbedded in the lives of the vast majority of the Iranian people.”
***
Source: “The Carter Administration and the Arc of Crisis: Iran, Afghanistan and the Cold War in Southern Asia, 1977-1981,” briefing book for conference prepared by the National Security Archive
The Defense Intelligence Agency, whose primary audience consisted of the secretary of defense, the Joint Chiefs of Staff, and military commanders, produced this unclassified primer on Shiism in Iran.  The DIA had its own HUMINT sources overseas but this document clearly derives its information from open sources and indeed contains nothing that an interested citizen could not easily have found in a public library.  But the topic indicates at least a basic recognition of the importance of one of the key dynamics at work in Iranian society. The extract posted here, all that appears to exist (and one of the few available DIA documents from the period), does not attempt to forecast the course of events in the country. 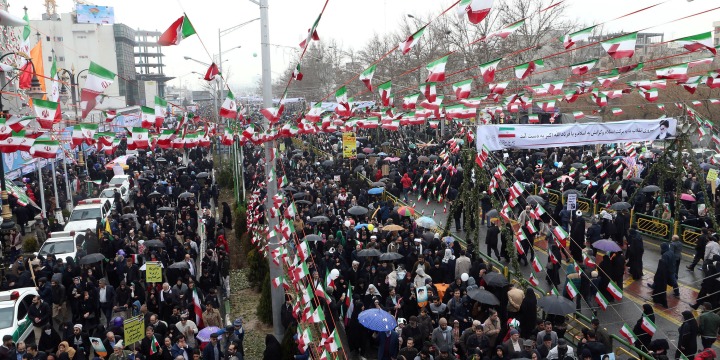 ***
Source: Freedom of Information Act request
As late as October 1978, there is still little sense in Washington or other Western capitals that things are heading in a dangerous direction in Iran.  In a meeting with British counterparts earlier in the month, State Department Iran specialist Henry Precht gave a lugubrious forecast for the Shah and for Western interests but according to records of the session (click here) the British – and even Precht’s superiors – thought he was well off target.  In this telegram from the U.S. Embassy in Tehran, an equally dire report directs the State Department’s attention to a visible change in attitudes across many sectors of public opinion.  Pro-Shah and anti-Shah elements alike reportedly agree that his apparent lack of firm action is making the situation worse and he is in danger of losing control of events.
***
Just a few days after the previous cable expressing a general sense of a worsening atmosphere in the capital, the Embassy in Tehran focuses this report on the specific question of a “military option.” The general sense seems to be that a military takeover is inevitable and many Embassy contacts – especially senior military officers – are actively supporting the idea. Many Iranians evidently believed later that the Carter administration eventually backed a military coup, which never took place. Noting that the Shah told Ambassador Sullivan personally that he was considering a military government, the telegram assesses that such a move could succeed but stops short of supporting it, concluding “the long-term costs would be heavy.” Go here for the full menu of documents.