Okay cool, but what could be the consequence in the end is the real question.

During the House impeachment proceedings, Rep. Adam Schiff (D-CA) released a report which included the phone records that included calls made or received by Rep. Devin Nunes(R-CA), journalist John Solomon, Rudy Giuliani, and others. The records in the report didn’t contain the content of the conversations but included who called who and how long the call lasted.

The belief was that the records were obtained through subpoenas to the phone companies of records related to Giuliani and Lev Parnas, with the obvious purpose meant to try to impugn the people whose records were included without reason or cause.

What made it especially troubling was Schiff wouldn’t explain who was subpoenaed or how, and if it was a Congressional subpoena straight to the companies, it was a troubling abuse of power.

He even published some of them in the Impeachment Report.

These sensitive records are protected by federal law.

Now, as Kim Strassel at the Wall Street Journal is reporting, the FCC Commissioner, Brendan Carr, is calling Schiff out over what he believes are abuses of his subpoena power and Carr wants answers. Strassel called it an “incredible abuse” with Schiff publishing call records of his political rivals including Nunes, even the President’s attorney, Rudy Giuliani. Schiff even smeared Nunes during a press conference with the records, trying to suggest that Nunes was somehow “complicit.”

2. By proceeding in secret, Schiff deprived Americans – from private citizens to his political opponents to a journalist – of their legal right to go to court and seek to maintain the confidentiality of their sensitive call records.

Here is my letter.: pic.twitter.com/aXPGVlwWIi

While Carr acknowledged that there might be instances in which Schiff could subpoena call records, Carr said the problem was that Schiff did this in secret, without giving the people whose records were grabbed the opportunity to respond or fight the request.

If that’s allowed, that’s a tremendous abuse of power if members of Congress can just demand phone records from the phone company about any American without any court and without any check.

Carr sent Schiff’s House Intel Committee a formal letter not only calling out their prior actions, but indicating that Schiff/the Committee may still be getting people’s records.

Carr points out in his letter that Schiff isn’t allowed to get the records from the phone company without consent from the citizen or in accordance with the law — that there has to be judicial review. Nor did they establish any legitimate legislative purpose in subpoenaing the records.

Moreover, as Carr notes, the recent decision involving the subpoena to former White House Counsel Don McGahn has now established that the subpoena power of the Congress as to such things might be questionable, without a court check on possible abuse of power.

Yes, please. It’s about time. Carr mentions substantial fines in his letter but there may be further action that could be taken. 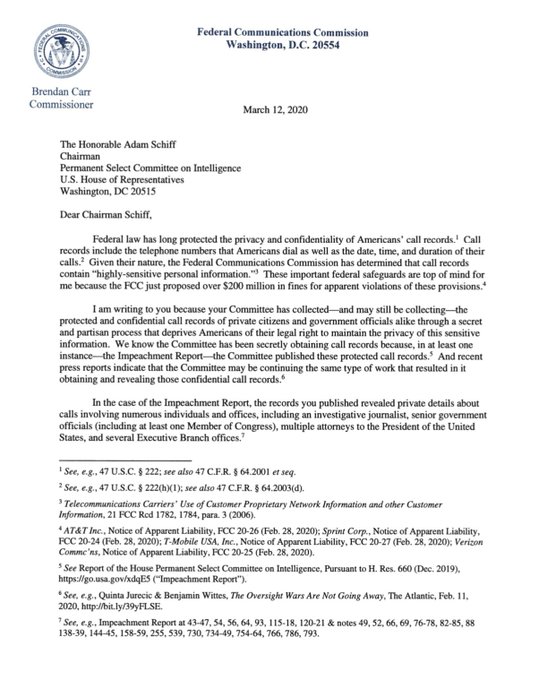 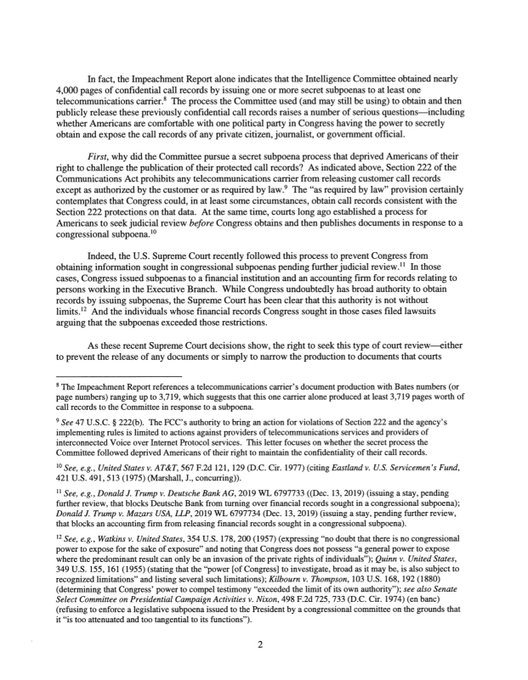