House Minority Leader Nancy Pelosi defended Rep. John Conyers as “an icon in our country” on Sunday, after noting he deserves “due process” as he faces allegations of sexual misconduct.

“We are strengthened by due process,” the California Democrat said on NBC’s “Meet the Press.” “Just because someone is accused — and was it one accusation? Is it two? I think there has to be — John Conyers is an icon in our country. He has done a great deal to protect women — Violence Against Women Act, which the left — right-wing — is now quoting me as praising him for his work on that, and he did great work on that. 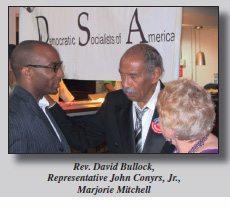 Great Nancy….do you also consider his other affiliations in your ‘icon’ remark?

Observer: Our national panic regarding sexual harassment of women by powerful men has claimed its first scalp in the nation’s capital. As of now, Minnesota Democrat Al Franken is staying in the Senate, some embarrassing incidents notwithstanding, while Alabama Republican Roy Moore may get there yet, despite multiple reports of his dalliances with underage girls. Of course, the grabber-in-chief in the White House shows no signs of going anywhere either, at least until even worse videotapes appear.

Michigan Democrat John Conyers, however, has taken a direct hit and has stepped down from his House leadership roles, including as the ranking member of the powerful Judiciary Committee, in the wake of press reports which depict him as a serial harasser and worse. This is a stunning fall for the 27-term Congressman, at present the House of Representatives’ longest-serving member, who has been prominent on his party’s left wing for more than a half-century.

In other words, the 88-year-old Conyers is no average member of Congress. The results of the House Ethics Committee investigation of his relations with female staffers are not yet in, and let it be said that all Americans are innocent until proven guilty. However, the allegations against Conyers, if true, portray the esteemed veteran of the civil rights movement in a troubling light. For now, he’s professing his innocence and standing his ground, indicating he has no intention of resigning from the House, where he has served since 1965.

His defenders cite that the elderly Conyers grew up in a profoundly different age, and that he has not adapted to current sensitivities about sexual matters. That said, it probably didn’t help him that yesterday Rep. Nancy Pelosi, the House Minority Leader, brushed off allegations against Conyers with the statement that he “is an icon in our country.” The implication that there are different rules for icons didn’t sit well with some Americans—after all, Bill Cosby was a national icon too, until recently—and Pelosi’s soundbite seems certain to feature in Republican ads next year in advance of the midterm election.

Nevertheless, there’s considerable irony regarding how Conyers is being treated by fellow Democrats, given the party’s current obsession with Russian espionage and propaganda—at least when it involves Republicans. The so-called “resistance” to Donald Trump is all the rage right now among Democrats, particularly on the party’s left wing, of which Conyers has been a prominent member of since the mid-1960s. While Pelosi and other “resisters” denounce President Trump and Kremlin malfeasance non-stop these days, Conyers has been notably silent about Russian spy-games.

That’s because, whatever inappropriate things Conyers may (or may not) have done with female staffers, he’s unquestionably been uncomfortably pro-Moscow for decades. Cursory examination of Conyers’ words and actions reveal a politician who is, at best, a longstanding dupe of the Kremlin. Worst of all, this “secret” aspect to Conyers’ political life has been hiding in plain sight for years, something that polite people didn’t bring up at Georgetown soirées, yet which was known to anybody who can access Google.

However, in the current hothouse climate regarding Russian spies and lies in our nation’s capital, Conyers’ ties to the Kremlin need to be discussed. From the beginning of his political career, Conyers had close relations with prominent members of the Communist Party USA, and he was a longtime member of the National Lawyers Guild, a CPUSA-affiliated group, as well as a leader of its Detroit chapter. Conyers never made much effort to mask his associations with known CPUSA members, even after being elected to Congress. Keep in mind that, as proven by KGB files, the CPUSA was a wholly-owned Kremlin operation, clandestinely funded by Soviet spies, and operating under Moscow’s direction.

Conyers went further and associated with known KGB fronts. He was long active in the World Peace Council—which sounds like a Quaker-run group but was founded by the Kremlin at the beginning of the Cold War. The WPC followed the Moscow line religiously, serving as a conduit for KGB Active Measures against the West, regularly denouncing American “war-mongering” and “imperialism” while coordinating anti-NATO protests in many countries.

With the publication of the Mitrokhin archive in 1999, the KGB’s supervisory relationship to the WPC was made public, though it was obvious long before to anyone who wanted to see that the latter was a leading Kremlin front for espionage and propaganda. Not that Conyers was deterred from involvement with the WPC, and he helped establish its American chapter, the U.S. Peace Council. He addressed its inaugural meeting in Philadelphia in November 1979, alongside numerous KGB agents, including Romesh Chandra, a prominent Indian Communist who headed the WPC for decades and was a senior operative of the Soviet secret police.

Such public actions did not go undetected, and on occasion the press made note of Conyers’ ties to the WPC and other Soviet fronts, particularly in the early 1980s, when KGB Active Measures against NATO reached their peak. It should be noted that Conyers was hardly the only left-wing Democrat in Washington who cultivated links to Kremlin spy-fronts during the Cold War.

American counterintelligence had questions, too. Investigating members of Congress was always a touchy issue for our counterspies, given the political sensitivities, but Conyers’ chumminess with the KGB was noted in our Intelligence Community. The benign take on Conyers’ questionable associations was that he was a mere dupe, a “useful idiot” to use the proper term. Others weren’t so sure, and when I asked a veteran IC counter-intelligencer who had checked out Conyers back in the 1980s, he responded with a wry smile: “Do you really think anybody’s that stupid?”

Moreover, this isn’t just a historical matter. Conyers has continued to follow the Moscow line on countless issues down to the present day. Back in 2010, when WikiLeaks was busy dumping hundreds of thousands of stolen classified State Department files on the Internet, Conyers came to the defense of Julian Assange and his cyber-criminal gang, stating that WikiLeaks had committed no crimes. That was a remarkable thing for the then-chair of the House Judiciary Committee to say, particularly when the leadership of his own party—including President Barack Obama and Secretary of State Hillary Clinton—proffered a radically different take on the case.

Since WikiLeaks barely bothers to conceal its Kremlin links these days, questions abound regarding Conyers’ public defense of the group which did so much damage to the Democrats and their presidential nominee in 2016. Even as relations with Moscow have soured since Russia’s seizure of Crimea and invasion of Ukraine in early 2014, Conyers has continued to spout Kremlin propaganda, as he has done for decades.

In June 2015, Conyers went on a tirade against Ukraine on the floor of the House, denouncing Kyiv’s military as “neo-Nazi”—a slander that was quickly parroted by Kremlin mouthpieces online. He stated that Ukraine should not get anti-aircraft missiles from Washington, citing as evidence the shootdown of Malaysian Airlines Flight 17 over eastern Ukraine in July 2014, the murder of 299 innocents—without noting that it was Russians, not Ukrainians, who downed the civilian airliner. It comes as no surprise that the bill amendment before the House to block anti-air missiles for Ukraine that was sponsored by Conyers was arranged by the notorious pro-Kremlin lobbyist Paul Manafort—the very same swamp macher who’s now facing indictments over his shady ties to President Trump and the Russians.

Conyers’ decades of spouting unfiltered Kremlin propaganda is so notorious in Washington that last year the Huffington Post, nobody’s idea of a right-wing outlet, ran a piece on him entitled “Putin’s Man in Congress.” That charge seems fair, based on the evidence, and is something that needs public discussion, particularly as Washington prepares to root out Moscow’s secret spy-propaganda apparatus in our nation’s capital.

That dirty apparat has been at work for decades. Kremlin disinformation didn’t begin with Donald Trump, and any thorough investigation of Russian espionage will reveal plenty of collaborators in Washington, on both sides of the political aisle. Some of them will even be Democratic “icons.” If the “resistance” isn’t willing to confront the bipartisan nature of the Kremlin’s clandestine political warfare against our country, they need to get out of the amateur counterspy business before they do real damage to our democracy.